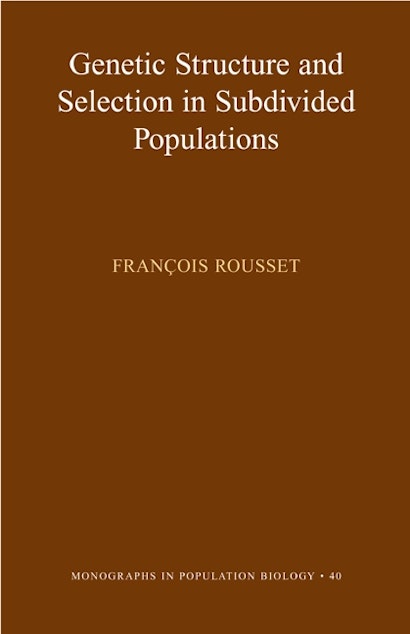 Various approaches have been developed to evaluate the consequences of spatial structure on evolution in subdivided populations. This book is both a review and new synthesis of several of these approaches, based on the theory of spatial genetic structure. François Rousset examines Sewall Wright’s methods of analysis based on F-statistics, effective size, and diffusion approximation; coalescent arguments; William Hamilton’s inclusive fitness theory; and approaches rooted in game theory and adaptive dynamics. Setting these in a framework that reveals their common features, he demonstrates how efficient tools developed within one approach can be applied to the others.


Rousset not only revisits classical models but also presents new analyses of more recent topics, such as effective size in metapopulations. The book, most of which does not require fluency in advanced mathematics, includes a self-contained exposition of less easily accessible results. It is intended for advanced graduate students and researchers in evolutionary ecology and population genetics, and will also interest applied mathematicians working in probability theory as well as statisticians.

François Rousset is a senior scientist in the Institute of Evolutionary Sciences (ISEM) in Montpellier, France, which operates under the aegis of the Centre National de la Recherche Scientifique and Montpellier University.

"For most of us reading his book, our task is to master the concepts behind the elegant equations presented in Rousset's monograph, if we are to have any hope of keeping up with future developments in the field of mathematical population genetics."—Wayne M .Getz, Bioscience

"This book will be very useful to graduate students and researchers in population genetics and ecology, especially to those interested in the genetic structure of spatially extended populations. It will be a valuable source of reference and inspiration."—Reinhard Buerger, Biometrics

"This is a well-written and indeed masterly book. It is the definitive treatment of its subject area. The scholarship is completely sound and the material is up-to-date and inclusive."—Warren Ewens, University of Pennsylvania

"This book represents a significant addition to the literature of population genetics and evolutionary theory, reviewing and summarizing theories and results in an area of importance to evolutionary biology."—Montgomery Slatkin, University of California, Berkeley