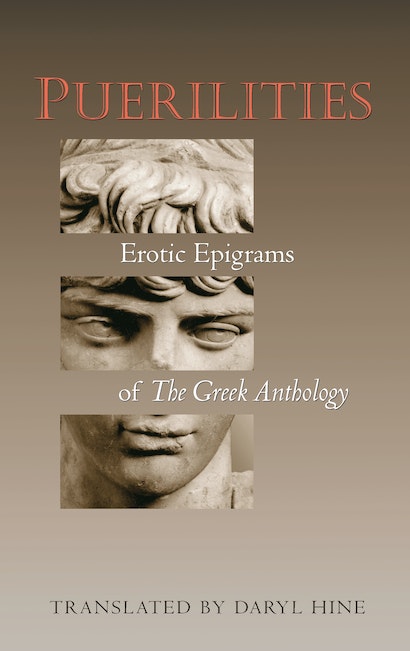 Elegiac lyrics celebrating the love of boys, which the translator terms Puerilities, comprise most of the twelfth book of The Greek Anthology. That book, the so-called Musa Puerilis, is brilliantly translated in this, the first complete verse version in English. It is a delightful eroticopia of short poems by great and lesser-known Greek poets, spanning hundreds of years, from ancient times to the late Christian era.


The epigrams — wry, wistful, lighthearted, libidinous, and sometimes bawdy — revel in the beauty and fickle affection of boys and young men and in the fleeting joys of older men in loving them. Some, doubtless bandied about in the lax and refined setting of banquets, are translated as limericks. Also included are a few fine and often funny poems about girls and women.


Fashion changes in morality as well as in poetry. The sort of attachment that inspired these verses was considered perfectly normal and respectable for over a thousand years. Some of the very best Greek poets — including Strato of Sardis, Theocritus, and Meleager of Gadara — are to be found in these pages. The more than two hundred fifty poems range from the lovely to the playful to the ribald, but all are, as an epigram should be, polished and elegant. The Greek originals face the translations, enhancing the volume’s charm.

A friend of Youth, I have no youth in mind,
For each has beauties, of a different kind.
— Strat?


I’ve had enough to drink; my heart and soul
As well as tongue are losing self-control.
The lamp flame bifurcates; I multiply
The dinner guests by two each time I try.
Not only shaken up by the wine-waiter,
I ogle too the boy who pours the water.
— Strat?


Venus, denying Cupid is her son,
Finds in Antiochus a better one.
This is the boy to be enamored of,
Boys, a new love superior to Love.
— Meleager

Daryl Hine is the author of fourteen collections of original poetry, three plays, a novel, and nonfiction prose, as well as translations from the Greek and Latin classics, including the Homeric Hymns and the works of Theocritus and Ovid. He was editor of Poetry from 1968 to 1978 and has been awarded a Guggenheim Fellowship, an American Academy and Institute of Arts and Letters award, and a MacArthur Foundation fellowship.

"Daryl Hine's translations from The Greek Anthology are the liveliest, frequently loveliest, and certainly the most libidinous versions of these celebrated texts that I've ever seen. I know from years of teaching that American students, even of the Classics, are quite vague about what The Greek Anthology was really like—particularly the salacious aspect of those poems. Hine alone gives a fair (or is that foul) sample."—Richard Howard, Columbia University