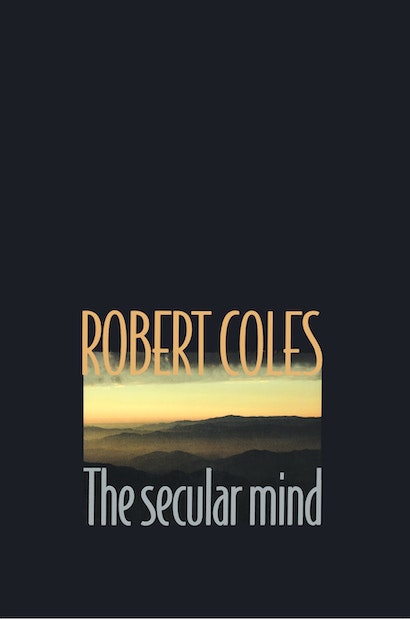 Does the business of daily living distance us from life’s mysteries? Do most Americans value spiritual thinking more as a hobby than as an all-encompassing approach to life? Will the concept of the soul be defunct after the next few generations? Child psychiatrist and best-selling author Robert Coles offers a profound meditation on how secular culture has settled into the hearts and minds of Americans. This book is a sweeping essay on the shift from religious control over Western society to the scientific dominance of the mind. Interwoven into the story is Coles’s personal quest for understanding how the sense of the sacred has stood firm in the lives of individuals — both the famous and everyday people whom he has known — even as they have struggled with doubt.


As a student, Coles questioned Paul Tillich on the meaning of the “secular mind,” and his fascination with the perceived opposition between secular and sacred intensified over the years. This book recounts conversations Coles has had with such figures as Anna Freud, Karen Horney, William Carlos Williams, Walker Percy, and Dorothy Day. Their words dramatize the frustration and the joy of living in both the secular and sacred realms. Coles masterfully draws on a variety of literary sources that trace the relationship of the sacred and the secular: the stories of Abraham and Moses, the writings of St. Paul, Augustine, Kierkegaard, Darwin, and Freud, and the fiction of George Eliot, Hardy, Meredith, Flannery O’Connor, and Huxley. Ever since biblical times, Coles shows us, the relationship between these two realms has thrived on conflict and accommodation.


Coles also notes that psychoanalysis was first viewed as a rival to religion in terms of getting a handle on inner truths. He provocatively demonstrates how psychoanalysis has either been incorporated into the thinking of many religious denominations or become a type of religion in itself. How will people in the next millennium deal with advances in chemistry and neurology? Will these sciences surpass psychoanalysis in controlling how we think and feel? This book is for anyone who has wondered about the fate of the soul and our ability to seek out the sacred in our constantly changing world.

Robert Coles is a research psychiatrist for the Harvard University Health Services, Professor of Psychiatry and Medical Humanities at Harvard Medical School, and James Agee Professor of Social Ethics at Harvard University. His books include Children of Crisis, for which he won the Pulitzer Prize, and over sixty works on psychology, literary criticism, and teaching. He is also the editor of Double-Take magazine.

"Coles . . . is one of those rare writers who can gracefully combine intellectual rigor with the idiom of spiritual quest. . . . [T]his is a potent and powerful work readers will think about and return to again and again."—Publishers Weekly

"The Secular Mind is part meditation, part autobiography, part literary and moral commentary. . . . [Coles] meditates on the possibility of belief in the sacred in the midst of an increasingly secular society."—Robert Kiely, The Boston Book Review

"A clear-eyed, deeply informed and admirably cool measure of the heritage and impetus of the forces that have guided our daily actions."—Reynolds Price, The New York Times Book Review

"By now most people know Robert Coles. Or for their own sake they ought to. . . . To read his books . . . is to make him a lasting friend."—The New York Times Book Review

"Indeed, Coles writes that the idea of even looking for knowledge—comprehension of the world—is a hallmark of the secular, scientific mind. Flannery O'Connor once remarked that 'mystery is a great embarrassment to the modern mind.' Science seeks explanations for everything, from the history of the universe to the history of the tapeworm.". . . .The Secular Mind, happily, does not live up to its title: it is not a secular, scientific study but a porous, open reflection—with answers that are incomplete. But the answers are satisfying and refreshing because they are incomplete."—David Grayson, San Francisco Bay Guardian

"Coles is tough-mindedly open to inspiration wherever it may be found. He begins by addressing the secular mind's relationship with its opposite-the sacred-and finishes with a turn toward self-exploration. Throughout, Coles is admirably alert to the costs of both worldviews."—Bob Reeder, Boston Review

"The Secular Mind offers many small gems. . . . Demanding, but definitely worth the effort."—Booklist

"This book is well written and quite readable at all levels. . . . Reading it is a delightful and stimulating experience."—Choice

"Coles is one of the best story-tellers in social science . . . The Secular Mind is a book for the unhurried reader . . . [We learn] to become deeper participants in a respectful yet distancing reflection on our culture and times."—James R. Kelly, Cross Currents

"This work is the product of a wise man sincerely asking up to rethink our basic values. Coles' style is casual and meditative; his book almost reads like a journal. Readers from a variety of disciplines will appreciate Coles' work."—Laju M. Balani, Journal of Church and State

"It's a pleasure to be in the presence of a man so smart and yet still capable of being rendered speechless by a student's sincere philosophical concerns. There are no conclusions here, but following Coles's considerations is worth the effort."—Ron Charles, The Christian Science Monitor