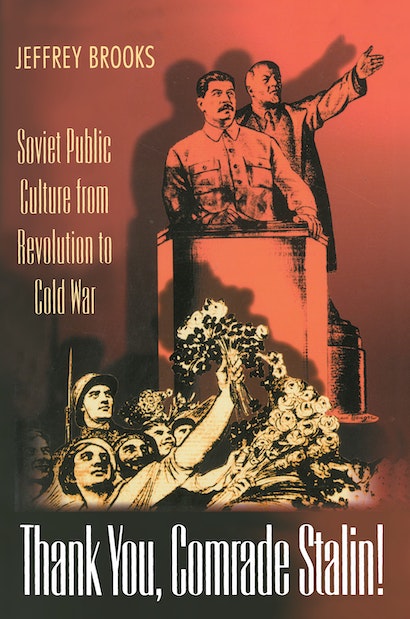 Thank you, our Stalin, for a happy childhood.” “Thank you, dear Marshal [Stalin], for our freedom, for our children’s happiness, for life.” Between the Russian Revolution and the Cold War, Soviet public culture was so dominated by the power of the state that slogans like these appeared routinely in newspapers, on posters, and in government proclamations. In this penetrating historical study, Jeffrey Brooks draws on years of research into the most influential and widely circulated Russian newspapers — including Pravda, Isvestiia, and the army paper Red Star — to explain the origins, the nature, and the effects of this unrelenting idealization of the state, the Communist Party, and the leader.

Brooks shows how, beginning with Lenin, the Communists established a state monopoly of the media that absorbed literature, art, and science into a stylized and ritualistic public culture — a form of political performance that became its own reality and excluded other forms of public reflection. He presents and explains scores of self-congratulatory newspaper articles, including tales of Stalin’s supposed achievements and virtue, accounts of the country’s allegedly dynamic economy, and warnings about the decadence and cruelty of the capitalist West. Brooks pays particular attention to the role of the press in the reconstruction of the Soviet cultural system to meet the Nazi threat during World War II and in the transformation of national identity from its early revolutionary internationalism to the ideology of the Cold War. He concludes that the country’s one-sided public discourse and the pervasive idea that citizens owed the leader gratitude for the “gifts” of goods and services led ultimately to the inability of late Soviet Communism to diagnose its own ills, prepare alternative policies, and adjust to new realities.

The first historical work to explore the close relationship between language and the implementation of the Stalinist-Leninist program, Thank You, Comrade Stalin! is a compelling account of Soviet public culture as reflected through the country’s press.

Jeffrey Brooks is Professor of European History at Johns Hopkins University. He is the author of When Russia Learned to Read (Princeton), which won the Vucinich Prize of the American Association for the Advancement of Slavic Studies, and of many articles on Russian and Soviet culture and politics.

"Long before the words 'politically correct' entered our vocabulary, Lenin and his associates set about installing an altogether steelier and more suffocating notion of 'political literacy.' By every means, down to censoring the content on matchbook covers, the Bolsheviks declared the minds of the people their possession to mold as they chose. . . . With unmatched thoroughness and persistence, [the Bolsheviks] brought to heel the press, theater, art, film, and every other form of public culture. Brooks meticulously surveys the process by which this was done and the product it yielded."—Foreign Affairs

"Soviet history has its own specificity. The student of Soviet literature must be a historian and political scientist and the historian involentarily becomes a philologist. Jeffrey Brooks is rich in this experience. . . . As Brooks shows, Soviet society and the stalinist epoch existed in a fantasy world of ideological construction not only because the authorities 'concealed the truth' and 'censored brutally,' but because through the press, literature, and art 'there was created a stylized, ritualized, and self-reflexive public culture which produced its own reality, supplanting all other forms of expression.' . . . Brooks happens to be both a knowledgeable and sensitive guide to the upside down world which appeared in the pages of Soviet newspapers and magazines."—Evgenii Dobrenko, Novyi Mir

"The book's central theme carries crushing weight. At least for a time, a regime can define reality. Brooks instructs most by reminding that Newspeak is old news, that a properly orchestrated public culture can creep, kudzu-like, through private thought."—Susan McWilliams, Boston Review

"[Brooks] invites us to ponder how the cultural dimension can be understood. The stimulating quality of his insights will surely provoke valuable debate."—Laura Englestein, American Historical Review

"This rich and compelling study of the genesis and development of official public culture in the Soviet Union has significant implications for our understanding of Soviet society. . . . While Brooks is certainly not the first to discuss the important consequences of the Bolshevik press monopoly, he has undoubtedly read and sampled the early Soviet press more systematically, more rigorously, and over a longer time interval than any other historian, and his book provides the most comprehensive analysis to date of the text and illustrations that appeared in the Soviet Union's most influential national newspapers between 1917 and 1953."—Julie Kay Mueller, Journal of Social History

"This book provides a vivid and systematic analysis of the techniques used by the Soviet leadership to build a nation unified in service to the state."—Harvard International Journal of Press/Politics

"Thank You, Comrade Stalin illuminates the story of the rise and demise of official public culture in the Soviet Union. In lively and provocative prose, Jeffrey Brooks examines the Soviet press to show how Party leaders constructed a vision of national identity through their tight control over the dissemination of information. This powerful book will spark new debates about the Cold War, and will fascinate anyone who ever longed for a peek behind the 'iron curtain'."—Elaine Tyler May, University of Minnesota

"Jeffrey Brooks demonstrates in fascinating detail what the term 'logocracy'—the rule of words—meant in the Soviet Union. Concentrating on the press but also covering literature and the arts, he shows how the public culture promoted by the communist authorities from Lenin to Stalin to the exclusion of all independent thought created its own false reality. It sustained the dictatorship but in the long run also contributed to its decay and collapse. The book is an important contribution to the understanding of a regime that exerted such baleful influence on the twentieth century."—Richard Pipes, Harvard University

"Jeffrey Brooks has lifted the curtain on a great mystery: how did the makers of the official Soviet state construct their world view? Through a splendid examination of the Soviet Press, Brooks reveals that the rise of the cult of Stalin, Soviet anti-Semitism and the great 'Great Patriotic War' against Fascism provided the foundational myths of the new regime. As he details the unfolding of the Soviet view of the Cold War, no longer will it be possible for scholars to study the Cold War as only a diplomatic response to the Soviets or an internal affair focused on anti-communist purges in the United States. Rather we have to understand the two great powers in dialogue with each other, and that political and cultural history are two sides of the same coin."—Professor Lary May, University of Minnesota

"Professor Jeffrey Brooks's Thank You, Comrade Stalin! is one of the very best books in any language on the Soviet Union and system."—Nicholas V. Riasanovsky, University of California, Berkeley

"Through a meticulous and exhaustive analysis of the daily Soviet Press, Brooks traces the development of the media vocabulary that provided the basic ideological ground informing relationships between the state and its citizens. The Stalin who stands at the center of this web of deceit is not first and foremost a monster nor an ideologue, but rather an omnipresent textual reality, the ultimate spinmeister."—Andrew Wachtel, Northwestern University

"The twentieth century knew other terrorist regimes, but the character and tone of Stalinist discourse was unique. Stalinist verbiage took the place of real discussions about the issues facing society, and Brooks gives us the most thorough, most intelligent analysis of that verbiage."—Peter Kenez, University of California, Santa Cruz