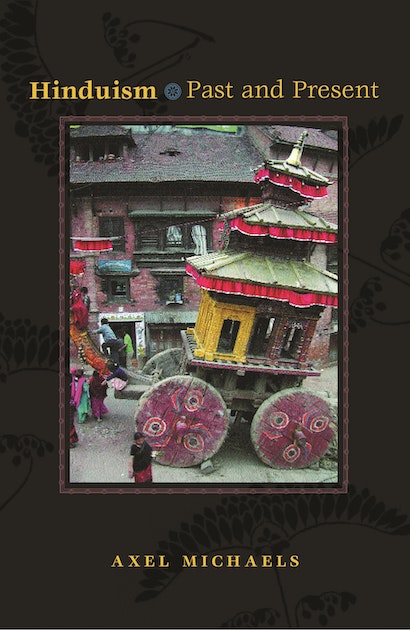 Hinduism is currently followed by one-fifth of humankind. Far from a monolithic theistic tradition, the religion comprises thousands of gods, a complex caste system, and hundreds of languages and dialects. Such internal plurality inspires vastly ranging rites and practices amongst Hinduism’s hundreds of millions of adherents. It is therefore not surprising that scholars have been hesitant to define universal Hindu beliefs and practices. In this book, Axel Michaels breaks this trend. He examines the traditions, beliefs, and rituals Hindus hold in common through the lens of what he deems its “identificatory habitus,” a cohesive force that binds Hindu religions together and fortifies them against foreign influences. Thus, in his analysis, Michaels not only locates Hinduism’s profoundly differentiating qualities, but also provides the framework for an analysis of its social and religious coherence.


Michaels blends his insightful arguments and probing questions with introductions to major historical epochs, ample textual sources as well as detailed analyses of major life-cycle rituals, the caste system, forms of spiritualism, devotionalism, ritualism, and heroism. Along the way he points out that Hinduism has endured and repeatedly resisted the missionary zeal and universalist claims of Christians, Muslims, and Buddhists. He also contrasts traditional Hinduism with the religions of the West, “where the self is preferred to the not-self, and where freedom in the world is more important than liberation from the world.”


Engaging and accessible, this book will appeal to laypersons and scholars alike as the most comprehensive introduction to Hinduism yet published. Not only is Hinduism refreshingly new in its methodological approach, but it also presents a broad range of meticulous scholarship in a clear, readable style, integrating Indology, religious studies, philosophy, anthropological theory and fieldwork, and sweeping analyses of Hindu texts.

Axel Michaels, the Professor of Classical Indology at the South Asia Institute at the University of Heidelberg, has published widely in the fields of Indology, anthropology, and religious studies. He has also conducted extensive fieldwork in Nepal and Northern India.

"[An] encyclopedic survey of Hinduism that is amazing in its comprehensive charts, theoretical sophistication, and illustrative detail. . . . Michaels wants to present living Hinduism in contrast to text-dominated descriptions."—Choice

"Despite several recent, and very good, introductions [to Hinduism] in the last fifteen years, this is the one that will likely find its way into the classroom most often—and for good reasons. Highly recommended not only for students, but for mature scholars as well, who will learn a great deal from this excellent volume."—Frederick M. Smith, Religious Studies Review

"A powerful, thoughtful, thorough presentation of Hindu traditions. The book's main purpose is to provide an overview of Hinduism and the book does this uniquely well. The work is encyclopedic in scope, but it is also analytical, and Michaels attempts throughout the book to introduce the reader not only to Hindu traditions but to major concepts in the study of religion more generally. I would recommend Michaels's book strongly to colleagues and other adult readers who need to teach something about, or who otherwise want to understand Hindu traditions."—Anne Feldhaus, Arizona State University

"Michaels's book distinguishes itself by combining in exemplary fashion a thorough knowledge of ancient and contemporary Hindu texts with a deep insight into the religion 'at ground level.' It will serve as an excellent introduction to Hinduism for college and graduate students—and may help scholars in religious studies begin to understand Hinduism in an altogether new way."—Michael Witzel, Harvard University