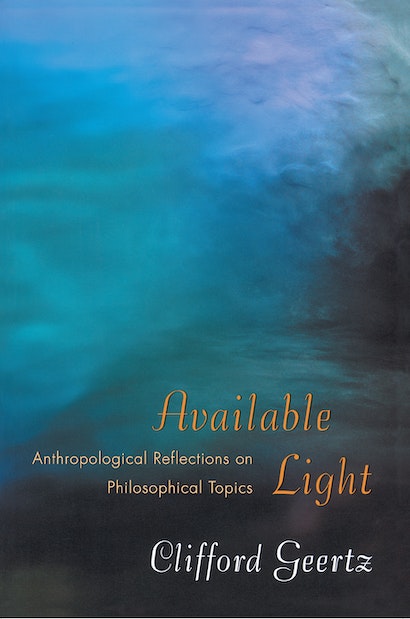 Clifford Geertz, one of the most influential thinkers of our time, here discusses some of the most urgent issues facing intellectuals today. In this collection of personal and revealing essays, he explores the nature of his anthropological work in relation to a broader public, serving as the foremost spokesperson of his generation of scholars, those who came of age after World War II. His reflections are written in a style that both entertains and disconcerts, as they engage us in topics ranging from moral relativism to the relationship between cultural and psychological differences, from the diversity and tension among activist faiths to “ethnic conflict” in today’s politics.


Geertz, who once considered a career in philosophy, begins by explaining how he got swept into the revolutionary movement of symbolic anthropology. At that point, his work began to encompass not only the ethnography of groups in Southeast Asia and North Africa, but also the study of how meaning is made in all cultures — or, to use his phrase, to explore the “frames of meaning” in which people everywhere live out their lives. His philosophical orientation helped him to establish the role of anthropology within broader intellectual circles and led him to address the work of such leading thinkers as Charles Taylor, Thomas Kuhn, William James, and Jerome Bruner. In this volume, Geertz comments on their work as he explores questions in political philosophy, psychology, and religion that have intrigued him throughout his career but that now hold particular relevance in light of postmodernist thinking and multiculturalism. Available Light offers insightful discussions of concepts such as nation, identity, country, and self, with a reminder that like symbols in general, their meanings are not categorically fixed but grow and change through time and place.


This book treats the reader to an analysis of the American intellectual climate by someone who did much to shape it. One can read Available Light both for its revelation of public culture in its dynamic, evolving forms and for the story it tells about the remarkable adventures of an innovator during the “golden years” of American academia.

Clifford Geertz published his famous work, The Interpretation of Cultures, in 1973. It influenced a generation of not only anthropologists but also other scholars and intellectuals. His most recent book is After the Fact: Two Countries, Four Decades, One Anthropologist. He is currently a faculty member at the Institute for Advanced Study, Princeton.

"Available Light reflects an eminent scholar's mature insights into the state of anthropology after it has lost much of its former prestige. . ."—Library Journal

"An important contribution to how we think and live in the world today."—Publishers Weekly

"This is a provocative look at the human race (and the study thereof) by a man who has seen more of it than most."—Kirkus Reviews

"The essays and personal history contained in Available Light distill the continuing vitality, honesty, and acumen of an intellectual. . . [Geertz's] clarity, humor, and insight never give way to the flattened tone of pedagogue."—Paul-Jonathan Benson, The Boston Book Review

"Mr. Geertz's most recent collection of papers and lectures . . . makes the peculiarities of his profession still more pronounced. What, he asks, is anthropology really about? . . . Isn't the anthropologist doomed to misinterpret another culture? Is any universal judgement possible? . . . So the anthropologist stands at a troubled crossroads. . . . In one direction is the world of culture, diverse and unimaginably complex; in the other is the world of nature, immutable and universal."—Edward Rothstein, New York Times

"Lucid, provocative and playful. . . . The book is impeccably written—droll, animated, and bright in both senses of the word—and should enlighten lay readers as well as specialists."—Lionel Shriver, The Guardian

"Anthropology has never been so central or so widely read within the academy; and anthropologists have never been so insecure. In this context of moral insecurity, Available Light is deeply moving."—T. M. Luhrmann, Times Literary Supplement

"I am a fan of Geertz because he is one of the world's most effective proponents of cultural, moral, and scientific pluralism. . . . His new book . . . is a welcome, predictably fascinating, and very elucidative exposition of Geertz's brand of pluralism. . . . Gripping."—Richard A. Shweder, Science

"Geertz once again makes an important contribution to how we think and live in the world today."—Publishers Weekly

"This book is impeccably written—droll, animated, and bright in both senses of the word—and should enlighten lay readers as well as specialists. . . . Lucid, provocative, and playful."—Lionel Shriver, Guardian