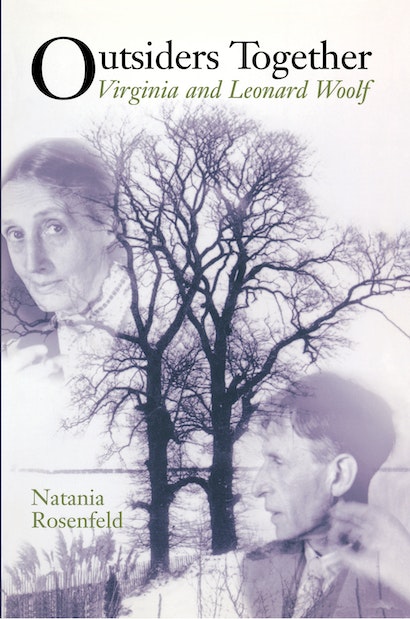 The marriage of Virginia and Leonard Woolf is best understood as a dialogue of two outsiders about ideas of social and political belonging and exclusion. These ideas infused the written work of both partners and carried over into literary modernism itself, in part through the influence of the Woolfs’ groundbreaking publishing company, the Hogarth Press. In this book, the first to focus on Virginia Woolf’s writings in conjunction with those of her husband, Natania Rosenfeld illuminates Leonard’s sense of ambivalent social identity and its affinities to Virginia’s complex ideas of subjectivity.


At the time of the Woolfs’ marriage, Leonard was a penniless ex-colonial administrator, a fervent anti-imperialist, a committed socialist, a budding novelist, and an assimilated Jew who vacillated between fierce pride in his ethnicity and repudiation of it. Virginia was an “intellectual aristocrat,” socially privileged by her class and family background but hobbled through gender. Leonard helped Virginia elucidate her own prejudices and elitism, and his political engagements intensified her identification with outsiders in British society. Rosenfeld discovers an aesthetic of intersubjectivity constantly at work in Virginia Woolf’s prose, links this aesthetic to the intermeshed literary lives of the Woolfs, and connects both these sites of dialogue to the larger sociopolitical debates — about imperialism, capitalism, women, sexuality, international relations, and, finally, fascism — of their historical place and time.

Natania Rosenfeld is Assistant Professor of English at Knox College. Her articles and poetry have appeared in various journals.

"For all its theoretical knowingness, Outsiders Together is a rather old-fashioned celebration of a long, intimate heterosexual relationship. . . . The strength of Outsiders Together is that it moves beyond the working and emotional relationship of Leonard and Virginia to subtly address larger issues—such as Leonard's Jewishness and Virginia's politics—which have hitherto been treated rather crudely."—Bryan Cheyette, Times Literary Supplement

"Rosenfeld's study is broad in scope, covering most of the lives of and the major works of both writers, while dwelling long enough on the writing to provide several illuminating cross-readings of texts. . . . Clearly and elegantly written, Outsiders Together makes a very persuasive case."—Jessica Berman, Virginia Woolf Miscellany

"Natania Rosenfeld has written an extraordinarily full, witty, politically responsible, and flexible account of the lives and writings of two people, emphasizing not only their separateness but also their extended dialogue with one another. In a sense, this is a 'double' critical biography that is inflected with psychology and history. The book is also valuable for its range of reference, concentrating on Virginia Woolf's most famous books and supplementing the analysis with passages from diaries, letters, autobiographies, reviews, essays, lectures, and short stories. Ultimately, this contribution constitutes a compelling reassessment of Woolf's relation to her society."—Vicki Mahaffey, University of Pennsylvania

"Outsiders Together is the most comprehensive work to date-and the fairest, most informed-on the interconnections between husband and wife, fiction and ideologies. It is long overdue. Not only is the book a timely corrective to prejudicial and reductionist readings of the Woolfs' subtly and mutually fulfilling relationship, but it is also a recuperation of Leonard's contributions to political thought and modern literature, and of Virginia's own evolution as a cultural subversive. What is particularly admirable about this book is its massive network of interconnecting historical facts, modern and postmodern theory, and clever, keen literary insights."—Thomas C. Caramagno, University of Nebraska

"Outsiders Together is the most comprehensive work to date—and the fairest, most informed—on the interconnections between husband and wife, fiction and ideologies. It is long overdue."—Thomas C. Caramagno, University of Nebraska