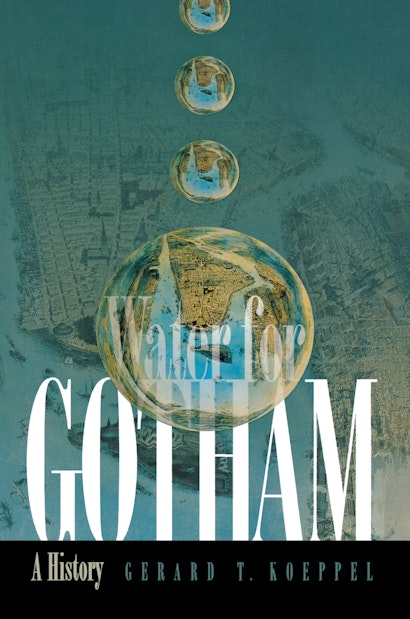 Water for Gotham tells the spirited story of New York’s evolution as a great city by examining its struggle for that vital and basic element — clean water. Drawing on primary sources, personal narratives, and anecdotes, Gerard Koeppel demonstrates how quickly the shallow wells of Dutch New Amsterdam were overwhelmed, leaving the English and American city beleaguered by filth, epidemics, and fires. This situation changed only when an outside water source was finally secured in 1842 — the Croton Aqueduct, a model for urban water supplies in the United States.


As the fertile wilderness enjoyed by the first Europeans in Manhattan vanishes and the magnitude of New York’s water problem grows, the reader is introduced to the plans of Christopher Colles, builder of the first American steam engine, and of Joseph Browne, the first to call for a mainland water source for this island-city. In this vividly written true-life fable of the “Fools of Gotham,” the chief obstacle to the aqueduct is the Manhattan Company. Masterminded by Aaron Burr, with the complicity of Alexander Hamilton and other leading New Yorkers, the company was a ruse, serving as the charter for a bank — today’s Chase Manhattan. The cholera epidemic of 1832 and the great fire three years later were instrumental in forcing the city’s leaders to finally unite and regain New York’s water rights.


Koeppel’s account of the developments leading up to the Croton Aqueduct reveals it as a triumph not only of inspired technology but of political will. With over forty archival photographs and drawings, Water for Gotham demonstrates the deep interconnections between natural resource management, urban planning, and civic leadership. As New York today retakes its waterfront and boasts famous tap water, this book is a valuable reminder of how much vision and fortitude are required to make a great city function and thrive.

Gerard T. Koeppel, a resident of Manhattan, is a writer and journalist. He was an editor at CBS News for eleven years, and previously a reporter, producer, and writer at NBC, Mutual, and other radio networks and stations.

"Koeppel . . . has written a vivid history of how Manhattan finally got reliable drinking water. . . . Koeppel's graceful history is written with wit and intelligence."—Publishers Weekly

"New York journalist Koeppel tells the lively, labyrinthine tale of how the burgeoning metropolis struggled for decades to obtain an adequate supply of water."—Booklist

"A tale of ingenuity in the face of enormous natural and social challenges, ably narrated by the journalist Gerard T. Koeppel. . . . Let us toast the engineers, the laborers and the politicians—the heroes of Koeppel's account—with a glass of clean, clear Manhattan tap water."—Laurence A. Marschall, The Sciences

"Mr. Koeppel has made . . . an engaging tale of material that could easily have become leaden. His prose is unfalteringly elegant, his eye for enlivening detail is keen, and his thorough research has been splendidly assembled. This is most certainly not just a book for New Yorkers."—Philip Ball, The New York Observer

"New York . . . has a good tale to tell of city hall intrigue and corruption and fortunes made on the back of cruel epidemics and of a heartening triumph for engineering. . . .The story is well told by a good journalist."—Fred Pearce, The Times Higher Education Supplement

"An engaging tale. . . . [Koeppel's] prose is unfalteringly elegant, his eye for enlivening detail is keen, and his thorough research is splendidly assembled. This is most certainly not just a book for New Yorkers."—Philip Ball, New York Observer

"Koeppel's study, an engaging read, follows the tortuous origins of the city's much-delayed water system. In doing so, Water for Gotham uncovers a rich history—a history that seemed to have been forgotten nearly as soon as the fresh water began to flow."—New York History

"Koeppel's lively and absorbing account of supplying water to New York amounts to a history of life itself in the city during its first two centuries. Disease, social habits, business and industry—virtually all aspects of public and private life in the city—have at times been shaped by the simple and basic need for supplies of clean water. This is a scholarly study written to capture anyone's imagination."—Ethan Carr, author of Wilderness by Design

"Engrossing and entertaining, Water for Gotham is a beautifully written romp through some juicy Big Apple history."—Alice Outwater, author of Water: A Natural History

"Delightfully told and informative, Gerard Koeppel's Water for Gotham: A History is as fresh and sparkling as the waters of the Croton Aqueduct."—Tony Hiss, author of The Experience of Place

"A meticulously researched and thoroughly documented history, Gerard Koeppel's Water for Gotham is also a well-paced story—or more precisely a collection of stories—about how 'Old New York' took its initial steps toward becoming the world's quintessential metropolis. This book will be valued—and enjoyed—not only by historians and urban planners, but also by anyone interested in the city's growth and development."—Thomas Mellins, coauthor of New York 1880, New York 1930, and New York 1960

"Water for Gotham delivers an important historical story about the little-noticed underpinnings of American city life, a tale rich with health and environmental issues that resonate to the present day. It also tellingly analyzes what passed for 'water policy' in old New York and water's centrality to everyday routines and in crises (fires, epidemics), while documenting the miseries New Yorkers suffered due to long term failures of vision and finance."—Philip Scranton, Rutgers University, author of Endless Novelty