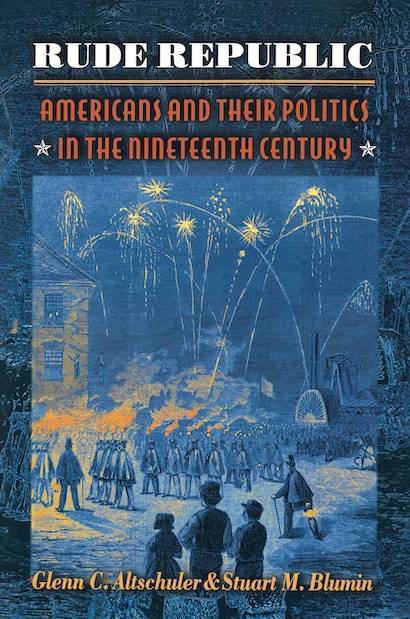 What did politics and public affairs mean to those generations of Americans who first experienced democratic self-rule? Taking their cue from vibrant political campaigns and very high voter turnouts, historians have depicted the nineteenth century as an era of intense and widespread political enthusiasm. But rarely have these historians examined popular political engagement directly, or within the broader contexts of day-to-day life. In this bold and in-depth look at Americans and their politics, Glenn Altschuler and Stuart Blumin argue for a more complex understanding of the “space” occupied by politics in nineteenth-century American society and culture. Mining such sources as diaries, letters, autobiographies, novels, cartoons, contested-election voter testimony to state legislative committees, and the partisan newspapers of representative American communities ranging from Massachusetts and Georgia to Texas and California, the authors explore a wide range of political actions and attitudes. They consider the enthusiastic commitment celebrated by historians together with various forms of skepticism, conflicted engagement, detachment, and hostility that rarely have been recognized as part of the American political landscape. Rude Republic sets the political parties and their noisy and attractive campaign spectacles, as well as the massive turnout of voters on election day, within the communal social structure and calendar, the local human landscape of farms, roads, and county towns, and the organizational capacities of emerging nineteenth-century institutions. Political action and engagement are set, too, within the tide of events: the construction of the mass-based party system, the gathering crisis over slavery and disunion, and the gradual expansion of government (and of cities) in the post-Civil War era. By placing the question of popular engagement within these broader social, cultural, and historical contexts, the authors bring new understanding to the complex trajectory of American democracy.

Glenn C. Altschuler is Dean of the School of Continuing Education and Summer Sessions and the Thomas and Dorothy Litwin Professor of American Studies at Cornell University. His books include Revivalism, Social Conscience, and Community in the Burned Over District and Better than Second Best: Love and Work in the Life of Helen Magill. Stuart M. Blumin is Professor of American History at Cornell University and the Director of Cornell-in-Washington. He has written several books, including The Emergence of the Middle Class: Social Experience in the American City, 1760-1900.

"This book is one of the most significant (and certainly most original) studies of American political history to appear in the last twenty years. . . . [The authors] have written an original, thought-provoking, and persuasive book. . . . [A] path-breaking study."—Tyler Anbinder, American Historical Review

"Rude Republic is an interesting and at times entertaining book. . . . The historical details are often fascinating."—Paul Giles, Times Literary Supplement

"This book offers an impressive in-depth analysis of politics and society in America's first experience with democratic self-rule."—Library Journal

"A rich and entertaining study."—Publishers Weekly

"This book plumbs behind the facades of nineteenth-century political life—especially that organized by the major parties—in a way that very few works of history ever have to date. Many of the arguments and conclusions are highly provocative, and the book will elicit as much applause as controversy. The debate and discussion it inspires will bring new insights to bear on the nature of nineteenth-century politics."—Ronald P. Formisano, University of Florida