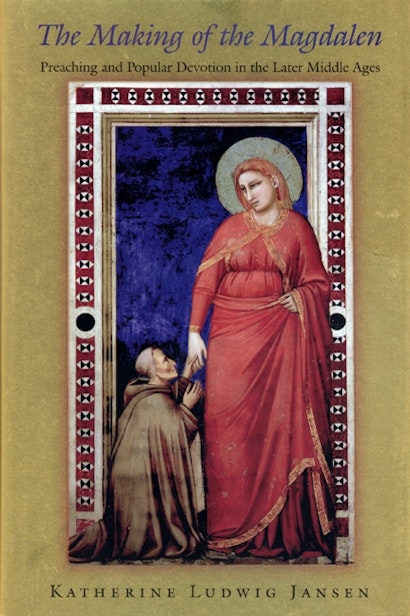 Best known during the Middle Ages as the prostitute who became a faithful follower of Christ, Mary Magdalen was the most beloved female saint after the Virgin Mary. Why the Magdalen became so popular, what meanings she conveyed, and how her story evolved over the centuries are the focus of this compelling exploration of late medieval religious culture. Analyzing previously unpublished sermons, Katherine Jansen uses the lens of medieval preaching to examine the mendicant friars’ transformation of Mary Magdalen, a shadowy gospel figure, into an emblem of action and contemplation, a symbol of vanity and lust, a model of perfect penance, and the embodiment of hope and salvation. She draws on diverse historical sources to reveal the laity’s devotion to Mary Magdalen, which departed significantly from the friars’ image of the saint, signaling a major development in popular religious practice and personal piety. Finally, the author comprehensively addresses the question of the House of Anjou’s alliance with the Magdalen, and illuminates the relationship between politics and sanctity in southern France and Italy.

Jansen shows how perceptions of the Magdalen merged with errors and misunderstandings to shape the social, spiritual, and political agendas of the later Middle Ages. She brings to life the rich complexity of medieval culture, which condemned female sexuality and women’s preaching and yet popularized the veneration of Mary Magdalen as a former prostitute chosen by Christ to be the “apostle of the apostles,” the first to witness and preach the Good News of the Resurrection.

"Jansen's book is both a superb study of the character of Mary Magdalen as interpreted by later medievals as well as a paradigmatic methodological study for approaching the intriguing question of the reception of the medieval sermon. . . . [It will be] a standard for both women's studies and the study of sermon literature. . . .The book should enjoy wide readership, not only by those interested in the Magdalen, but also by students and professionals alike who might look to this study for scholarly guidance—such its intellectual scope and methodological competence."—Joan Mueller, Theological Studies

"Jansen shows that the issue of gender was close to the surface in every phase of the Magdalen cult, bound up with the continuing debate over women as preachers and with questions of authority. On the whole she employs gender analysis convincingly to clarify some puzzling texts."—Donald Weinstein, Renaissance Quarterly

"[An] elegant and learned book. . . . it goes beyond it predecessors in several ways. . .. Jansen has produced a disciplined, tightly focused historical monograph. . .. The final result is theologically sophisticated and sociologically interesting."—Augustine Thompson, American Historical Review

"An ambitious and important book. . . . Having read it one is guaranteed to see medieval representations of the Magdalen with new eyes."—Jussi Hanska, Journal of Ecclesiastical History

"Jansen has a genuine gift for relating the story of the Magdalen to the larger religious and social history of the period. It is highly readable, learned, full of interesting material gleaned from primary archival research, and amply illustrated."—Lawrence S. Cunningham, Commonwealth

"A tremendous, ambitious, and worthy work of erudition and scholarship."—Linda E. Mitchell, The Historian

"This is an important book that deserves to be widely known."—Constant J. Mews, Journal of Religious History

"Jansen offers us a well-written book that brilliantly explores one of the most important saintly cults of the medieval era."—Bernard Schlager, The Historian

"An exciting and well-written work based on outstanding research. Katherine Jansen neatly lays out how the late medieval Magdalen was 'created,' partly by errors and misunderstandings, partly as conscious creation for both spiritual and political needs. There are moments in this book that are as much fun as a good mystery story."—Penelope D. Johnson, New York University

"Katherine Jansen's major study emerges as a real masterpiece. With subtlety and clarity she untangles the thread of multiple images of the saint, sometimes contradictory or paradoxical. She has established an exemplary historical study of undeniable solidity and great suggestive force."—Nicole Beriou, University Lumière Lyon 2 (France)

"Spirituality, iconography, saints, cults, religious women, and Mary Magdalen herself, all marginal to historical discourse until recently, are skillfully woven together in this book of central importance for understanding later medieval religion and society."—Lester K. Little, American Academy in Rome

"Thoroughly grounded in the intricacies and history of medieval Magdalen legends, Jansen's superb research of previously unexplored sources highlights new evidence that medieval preachers were convinced that Mary Magdalen indeed preached. This fascinating book casts new light on how Mary Magdalen was represented in sermons, art, and the minds of late medieval Christians. Captivating and essential reading for scholars of medieval religion and history, this clearly written book will appeal to all those interested in Mary Magdalen."—Beverly Kienzle, Harvard Divinity School

"This original and beautifully written book traces change in the image of and devotion to Mary Magdalen from the High Middle Ages to the cusp of modernity. This is a book for historians and history buffs, feminists and all who are interested in Christian popular devotion."—E. Ann Matter, University of Pennsylvania