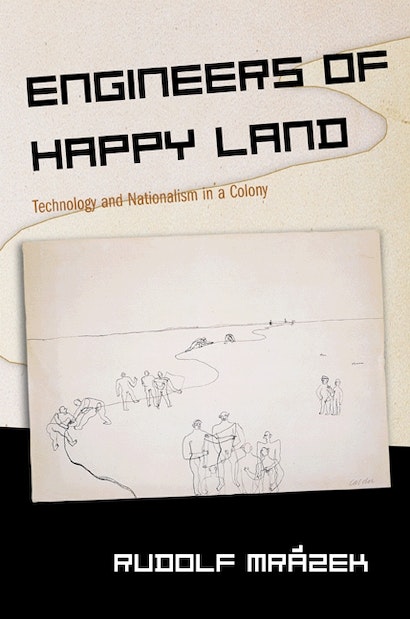 Based on close reading of historical documents — poetry as much as statistics — and focused on the conceptualization of technology, this book is an unconventional evocation of late colonial Netherlands East Indies (today Indonesia). In considering technology and the ways that people use and think about things, Rudolf Mrázek invents an original way to talk about freedom, colonialism, nationalism, literature, revolution, and human nature.


The central chapters comprise vignettes and take up, in turn, transportation (from shoes to road-building to motorcycle clubs), architecture (from prison construction to home air-conditioning), optical technologies (from photography to fingerprinting), clothing and fashion, and the introduction of radio and radio stations. The text clusters around a group of fascinating recurring characters representing colonialism, nationalism, and the awkward, inevitable presence of the European cultural, intellectual, and political avant-garde: Tillema, the pharmacist-author of Kromoblanda; the explorer/engineer IJzerman; the “Javanese princess” Kartina; the Indonesia nationalist journalist Mas Marco; the Dutch novelist Couperus; the Indonesian novelist Pramoedya Ananta Toer; and Dutch left-wing liberal Wim Wertheim and his wife.


In colonial Indies, as elsewhere, people employed what Proust called “remembering” and what Heidegger called “thinging” to sense and make sense of the world. In using this observation to approach Indonesian society, Mrázek captures that society off balance, allowing us to see it in unfamiliar positions. The result is a singular work with surprises for readers throughout the social sciences, not least those interested in Southeast Asia or colonialism more broadly.

Rudolf Mrázek is Professor of History at the University of Michigan and the author of Tan Malaka: A Political Personality Structure of Experience, Bali: The Split Gate to Heaven, and Sjahrir: Politics and Exile in Indonesia.

"A thought-provoking study. . . . Recommended reading for anyone who studie this period of Indonesian history."—Tineke Hellwig, Pacific Affairs

"As no other book has done, this one conveys the feel and flavor of modernity as it took root in the early twentieth-century Indonesia."—James R. Rush, American Historical Review

"A striking and deeply engaging historical study. . . . In tracing this history, Rudolf Mrazek takes the reader on a journey, sometimes strange, through the jungles, laboratories, houses, trains, and latrines of late-colonial life. He also brings to life a cast of historical characters . . . who used everything from toilets to airplanes as tools for articulating and reflecting upon what it meant to be modern in the Indies. . . . Mraze develops his theoretical insights with a light hand through the telling of an original history that takes surprising and quirky turns."—Joshua Barker, Technology and Culture

"Engineers of Happy Land: Technology and Nationalism in a Colony is a wonderfully moody book. Moody, because it aims at capturing the aura of the Dutch East Indies in the last seventy-five years of colonial rule almost as much as it attempts to tell a critical, historical story. Wonderful, because it succeeds at this project better than any other book that I have read about this particular time and place. One feels as if time travel has been accomplished by the time that the last page is reached. . . . We do not so much analyze the world of this Dutch colony from the nineteenth century into the early twentieth century as we live in it for three hundred pages. . . . It really should be read by anyone who cares about Indonesia.""—Eric Tagliacozzo, Journal of Asian Studies

"This book is both analytically daring and historically informative. I know of no work of colonial history, for Southeast Asia or elsewhere, that is comparable in its scope or power to illuminate—not to mention the zest and wit it brings to a potentially dry topic. There a many intriguing insights, startling images, and profound interpretations."—Mary Margaret Steedly, Harvard University