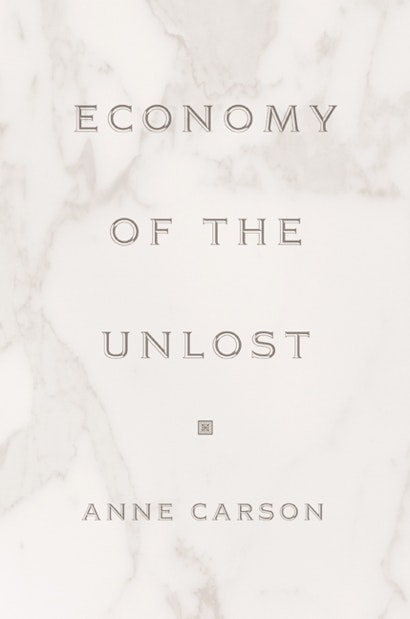 The ancient Greek lyric poet Simonides of Keos was the first poet in the Western tradition to take money for poetic composition. From this starting point, Anne Carson launches an exploration, poetic in its own right, of the idea of poetic economy. She offers a reading of certain of Simonides’ texts and aligns these with writings of the modern Romanian poet Paul Celan, a Jew and survivor of the Holocaust, whose “economies” of language are notorious. Asking such questions as, What is lost when words are wasted? and Who profits when words are saved? Carson reveals the two poets’ striking commonalities.


In Carson’s view Simonides and Celan share a similar mentality or disposition toward the world, language and the work of the poet. Economy of the Unlost begins by showing how each of the two poets stands in a state of alienation between two worlds. In Simonides’ case, the gift economy of fifth-century b.c. Greece was giving way to one based on money and commodities, while Celan’s life spanned pre- and post-Holocaust worlds, and he himself, writing in German, became estranged from his native language. Carson goes on to consider various aspects of the two poets’ techniques for coming to grips with the invisible through the visible world. A focus on the genre of the epitaph grants insights into the kinds of exchange the poets envision between the living and the dead. Assessing the impact on Simonidean composition of the material fact of inscription on stone, Carson suggests that a need for brevity influenced the exactitude and clarity of Simonides’ style, and proposes a comparison with Celan’s interest in the “negative design” of printmaking: both poets, though in different ways, employ a kind of negative image making, cutting away all that is superfluous. This book’s juxtaposition of the two poets illuminates their differences — Simonides’ fundamental faith in the power of the word, Celan’s ultimate despair — as well as their similarities; it provides fertile ground for the virtuosic interplay of Carson’s scholarship and her poetic sensibility.

Anne Carson is a poet, essayist and scholar of classics who lives in Montreal. Her first book, Eros the Bittersweet: An Essay (Princeton), has recently been reissued by The Dalkey Archive. Her most recent book, Autobiography of Red: A Novel in Verse (Knopf), was nominated for the National Book Critics Circle Award in Poetry.

"Erudite and entertaining, effortlessly able to play across a range of associations, the book traces a number of similarities in artistic approach between two writers who would seem, on the face of it, to have inhabited very different worlds . . . Economy of the Unlost is a beguiling piece of work, both scholarly and persuasive."—Elizabeth Lowry, London Review of Books

"This is one of those rewarding, original, rigorously attentive books that only Anne Carson could have written. At its core is an idea-the way the overlapping senses of 'economy' play out in language and in monetary history-that only this brilliant poet/classicist could have come up with. Economy of the Unlost is a strange book, bringing together as it does Simonides and Paul Celan; but its strangeness is one of its great virtues, for startling insights spring uncannily off every page."—Wendy Lesser, Editor, The Threepenny Review

"[A] magnificent and lovely essay. . . . I never wanted [the] book to end. .. ."—Stanley Corngold, Modernism/Modernity

"[Carson] convincingly draws out the fraternity of tone and inclination in two poets far removed in time, experience, and language, a significant accomplishment. It is. . . .difficult to do full justice to her book—rich, delicate, and complex. . . . An act of grace."—Danielle Allen, Chicago Review

"This is a remarkable, gripping, and moving book, itself a kind of extended prose poem, crafted by Carson between the excerpts of the two poets and her amazing readings and juxtapositions thereof. Like all of Carson's writing, it is sui generis, combining meticulous scholarship with the sensibility and style of a poet. I have always felt it was a privilege simply to be allowed to read Carson's work, and this manuscript is perhaps the best thing she has done."—Leslie Kurke, University of California, Berkeley