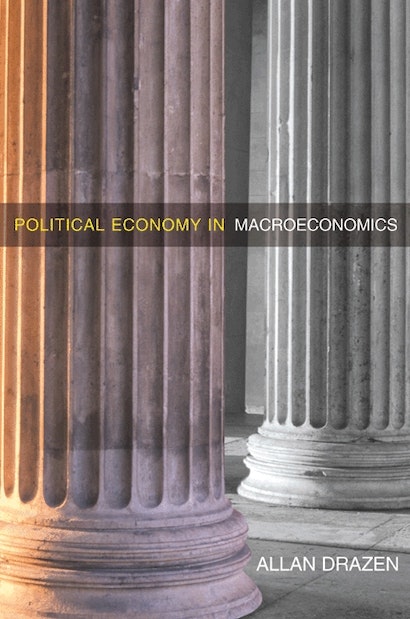 Originally, economics was called political economy, and those studying it readily accepted that economic decisions are made in a political world. But economics eventually separated itself from politics to pursue rigorous methods of analyzing individual behavior and markets. Recently, an increasing number of economists have turned their attention to the old question of how politics shape economic outcomes. To date, however, this growing literature has lacked a cogent organization and a unified approach. Here, in the first full-length examination of how political forces affect economic policy decisions, Allan Drazen provides a systematic treatment, organizing the increasingly influential “new political economy” as a more established field at the highly productive intersection of economics and political science.


Although he provides an extraordinarily helpful guide to the recent explosion of papers on political economy in macroeconomics, Drazen moves far beyond survey, giving definition and structure to the field. He proposes that conflict or heterogeneity of interests should be the field’s essential organizing principle, because political questions arise only when people disagree over which economic policies should be enacted or how economic costs and benefits should be distributed. Further, he illustrates how heterogeneity of interests is crucial in every part of political economy. Drazen’s approach allows innovative treatment — using rigorous economic models — of public goods and finance, economic growth, the open economy, economic transition, political business cycles, and all of the traditional topics of macroeconomics.


This major text will have an enormous impact on students and professionals in political science as well as economics, redefining how decision makers on several continents think about the full range of macroeconomic issues and informing the approaches of the next generation of economists.

"[A] magnificent new book. . . . Drazen's book has established the benchmark for years to come, in terms of both coverage and depth of critical assessment. . . . This is a book you will want on your shelf."—Leonardo Bartolini, Journal of International Economics

"Formal models of political economy are today part of the tool kit of every well-trained macroeconomist. There exists no better guide to these models than this colossal book. Allan Drazen is not only a leading practitioner of the art; he is a first-rate expositor. A survey, textbook, and critique all in one, this book informs, teaches, and stimulates. You will not need another book on political economy for some time to come."—Dani Rodrik, Harvard University

"This book is magnificent, and is sure to become a standard reference in the rapidly growing field of politics and macroeconomics."—Kenneth Rogoff, Harvard University

"Drazen's book gives an excellent account of the political dimension of macroeconomic policy. With its careful attention to methodological issues, thorough and balanced presentation of the literature, and clear exposition and perceptive evaluation of models, this book will be valuable both as a reference volume for researchers and a textbook for graduate students."—Avinash Dixit, Princeton University

"This book will be a lasting contribution: it will be widely used in graduate courses on the topic, and by whoever wants to learn about these recent developments of economic theory. Its main strengths are clarity of exposition, completeness of treatment, balanced critical evaluation ... and, perhaps most valuable of all, a very successful attempt to integrate the many disparate contributions [to the new political economy] with earlier literature in public choice and public finance, as well with each other."—Guido Tabellini, Universita Bocconi and Centre for Economic Policy Research in London