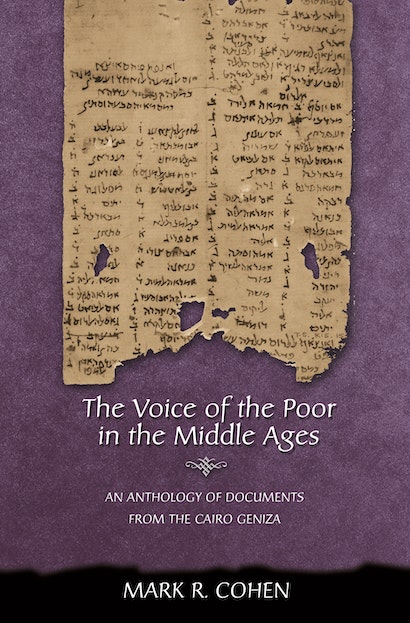 They are voices that have been silent for centuries: those of captives and refugees, widows and orphans, the blind and infirm, and the underclass of the “working poor.” Now, for the first time, the voices of the poor in the Middle Ages come to life in this moving book by historian Mark Cohen. A companion to Cohen’s other volume, Poverty and Charity in the Jewish Community of Medieval Egypt, the book presents more than ninety letters, alms lists, donor lists, and other related documents from the Geniza, a hidden chamber for discarded papers, situated inside a wall in a Cairo synagogue. Cohen has translated these documents, providing the historical context for each.


In the past, most of what we knew of the poor in the Middle Ages came from records and observations compiled by their literate social superiors, from tax collectors to the inquisitor’s clerk, from criminal judges to the benefactors of the helpless, from makers of Islamic waqf deeds to authors of Arabic chronicles, and in Judaism, from Rabbis who wrote responsa to compilers of Jewish-law codes.


What distinguishes this book is that it contains the voices of the poor themselves, found in documents heretofore largely ignored. Because an ancient custom in Judaism prohibited the destruction of pages of sacred writing, the documents were preserved, largely unharmed, for as many as nine centuries.

The Voice of the Poor in the Middle Ages provides access to the attitudes and philanthropic activities of the charitable, alongside the dramatic writings of the poor themselves, whether penned in their own hands or dictated to a scribe or family member. The book also allows a rare glimpse into the women of the Middle Ages, as well as into the world of private charity — an area long elusive to the medieval historian. For researchers and students alike, this book will be an invaluable social history source for years to come.

Mark R. Cohen is Professor of Near Eastern Studies at Princeton University and a well-known authority on the Cairo Geniza and the history of the Jews in the medieval Islamic world. His books include Jewish Self-Government in Medieval Egypt (Princeton), which won the National Jewish Book Award for Jewish history in 1981; Jewish Life in Medieval Egypt 641-1382, translated into Arabic, 1987; The Autobiography of a Seventeenth-Century Venetian Rabbi: Leon Modena's Life of Judah(Princeton); and, most recently, Under Crescent and Cross: The Jews in the Middle Ages (Princeton), which has been translated into Hebrew, Turkish, and German.

"This anthology will expand our understanding of what life was like at the time when Islamic civilization was at or near its peak. It makes an excellent companion to Cohen's other book, Poverty and Charity in the Jewish Community of Medieval Europe."—Michael Bonner, University of Michigan

"Scholars and students of the Cairo Geniza, the medieval Muslim world, and the history of poverty and charity will find here a rich trove of newly-translated petitions, poor rolls, lists of benefactors, and letters of recommendation. They afford a rare view of the workings of charity and the world of the poor in the Middle Ages."—Amy Singer, Tel Aviv University