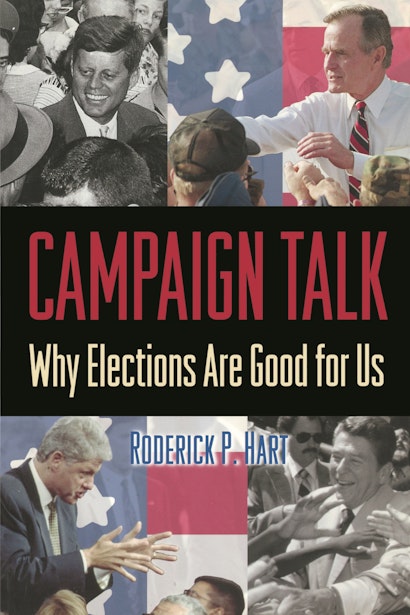 Roderick Hart may be among the few Americans who believe that what politicians say in a campaign actually matters. He also believes that campaigns work. Even as television coverage, political ads, and opinion polls turn elections into field days for marketing professionals, Hart argues convincingly that campaigns do play their role in sustaining democracy, mainly because they bring about a dialogue among candidates, the press, and the people. Here he takes a close look at the exchange of ideas through language used in campaign speeches, political advertising, public debates, print and broadcast news, and a wide variety of letters to the editor. In each case, the participants choose their words differently, and this, according to Hart, can be a frustrating challenge to anyone trying to make sense of the issues. Yet he finds that the process is good for Americans: campaigns inform us about issues, sensitize us to the concerns of others, and either encourage us to vote or at least heighten our sense of the political world.


Hart comes to his conclusions by using DICTION, a computer program that has enabled him to unearth substantive data, such as the many subtle shifts found in political language, over the past fifty years. This approach yields a rich variety of insights, including empirically based explanations of impressions created by political candidates. For example, in 1996 Bill Clinton successfully connected with voters by using many human-interest words — “you,” “us,” “people,” “family.” Bob Dole, however, alienated the public and even undermined his own claims of optimism by using an abundance of denial words — “can’t,” “shouldn’t,” “couldn’t.” Hart also tracks issue buzzwords such as “Medicare” to show how candidates and voters define and readjust their positions throughout the campaign dialogue.


In the midst of today’s increased media hype surrounding elections, Americans and the candidates they elect do seem to be listening to each other — as much as they did in years gone by. Hart’s wide-ranging, objective investigation upends many of our stereotypes about political life and presents a new, more bracing, understanding of contemporary electoral behavior.

Roderick P. Hart holds the Shivers Chair in Communication and is Professor of Government at the University of Texas, Austin, where he also serves as director of the Annette Strauss Institute for Civic Participation. He is the author of numerous works, including The Sound of Leadership, Modern Rhetorical Criticism, and Seducing America: How Television Charms the Modern Voter. He has been named a Research Fellow of the International Communication Association and a Distinguished Scholar by the National Communication Association.

"This upbeat assessment is founded on a careful look at language. . . . Readers may not be ready to embrace electoral politics as a national treasure, but Hart's suggestion that at least something positive can be gleaned from the campaign trail is reassuring."—Publishers Weekly

"Campaign Talk should be required reading for politicians and their speechwriters. However, it is also for political campaign workers who talk about "staying on the message" and really for anyone who need to be reminded that democracy is not for the complacent but rather it is a dirty-your-fingernails process that anyone can, and should, dive into."—David Kissinger, San Franciso Bay Guardian

"Hart is to be complimented for what is . . . a brave premise and encouraging analysis. . . . [He] has written a useful and impressive book."—Lane Crothers, Quarterly Journal of Speech

"For those cynical and pessimistic about American political campaigns, this book may be an appropriate antidote. . . . The sophisticated research methodology does not detract from the readable text."—Library Journal

"In [his] fascinating new book . . . Roderick Hart uses a computer to analyze the language of candidates to see how their vocabularies work. Specifically, [he] shows how a candidate is or is not in touch with his times."—Suzanne Fields, Washington Times

"The book to buy for the Rodney Dangerfield campaign operative in your life, sure to buck him up on those long bus rides."—Carlin Romano, Philadelphia Inquirer

"Hart forces us to rethink some cliches of political kibitzing. . . . Campaigns teach, sensitize, and activate the people as they preach to them."—Carlin Romano, Philadelphia Inquirer

"[Hart] treats presidential campaigns as a conversation among the people, the press, and the nation's leaders, and finds they serve the nation well. Such optimistic conclusions seem to run against the conventional wisdom and numerous recent more rigorous analyses, yet it would be difficult to find in Hart's persuasive and enthusiastic analysis flaws serious enough to undermine his conclusions. The success of his volume lies precisely in the mix of "hard" and "soft" methodology. American democracy seen through the prism of work usage looks impressively stable and efficient. . . . No matter how skeptical and cautious readers may be, they must admit that Hart develops his argument in a captivatingly persuasive fashion."—Bohdan Szlarski, The Review of Politics

"Roderick Hart may be the forerunner of a new trend that appraises American political processes and democracy more favorably than the literature of the past twenty years. Full of insight and revelations, this book is a fascinating combination of hard data and a sublime writing voice. It is a pleasure to read."—David L. Paletz, Duke University

"The claim that campaigns have changed very little—or if they have changed, the change lies not in the politicians or the press but in the people—tells us a lot about American politics. The claim that the computer program DICTION can predict winners is a very significant alternative to the general belief that economic ups and downs are the best predictor of who wins presidential elections. Citizens thinking about their vote will find this book entertaining and thoughtful."—Richard Anderson, University of California, Los Angeles