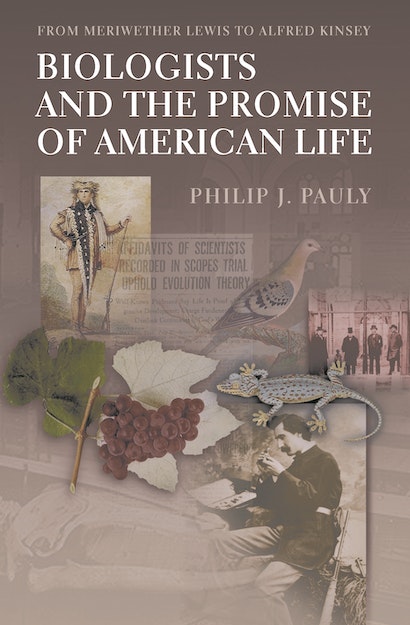 Explorers, evolutionists, eugenicists, sexologists, and high school biology teachers — all have contributed to the prominence of the biological sciences in American life. In this book, Philip Pauly weaves their stories together into a fascinating history of biology in America over the last two hundred years.


Beginning with the return of the Lewis and Clark expedition in 1806, botanists and zoologists identified science with national culture, linking their work to continental imperialism and the creation of an industrial republic. Pauly examines this nineteenth-century movement in local scientific communities with national reach: the partnership of Asa Gray and Louis Agassiz at Harvard University, the excitement of work at the Smithsonian Institution and the Geological Survey, and disputes at the Agriculture Department over the continent’s future. He then describes the establishment of biology as an academic discipline in the late nineteenth century, and the retreat of life scientists from the problems of American nature. The early twentieth century, however, witnessed a new burst of public-oriented activity among biologists. Here Pauly chronicles such topics as the introduction of biology into high school curricula, the efforts of eugenicists to alter the “breeding” of Americans, and the influence of sexual biology on Americans’ most private lives.


Throughout much of American history, Pauly argues, life scientists linked their study of nature with a desire to culture — to use intelligence and craft to improve American plants, animals, and humans. They often disagreed and frequently overreached, but they sought to build a nation whose people would be prosperous, humane, secular, and liberal. Life scientists were significant participants in efforts to realize what Progressive Era oracle Herbert Croly called “the promise of American life.” Pauly tells their story in its entirety and explains why now, in a society that is rapidly returning to a complex ethnic mix similar to the one that existed for a hundred years prior to the Cold War, it is important to reconnect with the progressive creators of American secular culture.

Philip J. Pauly is Professor of History at Rutgers University. He is the author of Controlling Life: Jacques Loeb and the Engineering Ideal in Biology.

"A tantalizing and ambitious study that places American biologists squarely in the middle of national, social political, and economic development . . .Pauly has an elegant writing style that makes this book a pleasure to read. . . . A remarkable vision of the place of science in American life that will be enjoyed by historians and scientists alike."—Audra J. Wolfe, Science

"Ambitious in its scope . . . Pauly's book grafts the stories of local and regional communities of scientists onto a narrative stock of national improvement and progress. . . . [A] valuable contribution to the local and regional history of biology in American culture."—Gregg Mitman, American Scientist

"This book is a significant contribution to the worthy task of integrating the history of science and American history."—Christine Keiner, Perspectives in Biology and Medicine

"An engaging, intelligent, and challenging study. . . . It is a masterful narrative that raises fascinating and thought-provoking issues."—Otniel E. Dror, Journal of the History of Medicine

"Here, at last, is a book that skillfully narrates stories from the biological sciences in ways that demonstrate their connection to other aspects of American culture. An important book."—Sally Gergory Kohlestedt, The Journal of American History

"A wonderful book about biologists and their work on the American continent. . . . Biologists and the Promise of American Life is an important and well-crafted contribution to American history."—John L. Rudolph, History of Education Quarterly

"Biologists and the Promise of American Life offers a fascinating overview of the development of American biology from the beginning of the nineteenth century to the second World War."—Gerald J. Fitzgerald, Environmental History

"Biologists and the Promise of American Life . . . is extremely well researched, it is very well written, and it provides many interesting historical insights while, at the same time, it asks many provocative questions. Pauly's new work will become the standard text for overviews of American biology from the early nineteenth century until the Second World War."—Keith R. Benson, Bulletin of the History of Medicine

"An engaging history that will be valued by both specialists and general readers. . . . The treatment of people is insightful and sympathetic. In a series of vignettes Pauly captures each person's essential qualities—and eccentricities—and shows how in diverse ways they expressed the many varieties of American experience. . . . While covering vast ground, he engages the reader's attention by keeping the individuals in clear focus."—Sharon Kingsland, Isis

"In this thoughtful and gracefully written book, Pauly shows how American biologists in the first half of the twentieth century took on the project of developing the science of biology in the United States as a cultural project. . . . He shows us a world of scientists deeply engaged in a project that they understand as simultaneously moral, social, political, and thoroughly scientific."—Naomi Oreskes, Journal of the History of Behavioral Science

"A useful and thought-provoking contribution to the understanding of the role of a natural science—biology—in shaping the culture of the modern world."—Maciej Henneberg, Journal of Biosocial Science

"There is no book that covers quite the same territory and places this cluster of internal disciplinary issues in a larger institutional and cultural/political context. Philip Pauly is well informed about current scholarship and has a good eye for the telling quotation or incident."—Charles E. Rosenberg, University of Pennsylvania

"This is a stunning book both for the courage, ambition, and vision of its topic and for the solid style of its achievement."—Mary P. Winsor, University of Toronto

"Philip Pauly is a first-rate American historian, one of the most imaginative writers today. He is not just a historian of science, but rather a historian of the ways that science plays out in American culture and society. Biologists and the Promise of American Life is an excellent and important book that will reach a wide audience—it will be useful for scholars and classrooms alike, and entice historians of science to expand their perspective. And it's fun to read, with a good mix of stories, personalities, practices, resources, and references."—Jane Maienschein, Arizona State University