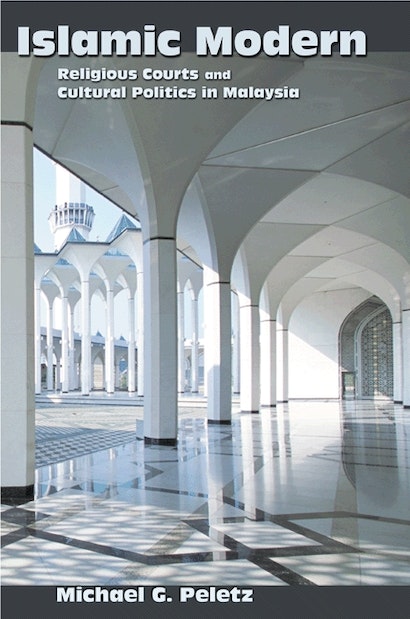 How do Islamic courts work? What sorts of cultural understandings inform judicial process and litigants’ strategies? How do women’s claims fare? Do these courts promote social tolerance? And how do states use them to consolidate power, build nations, and shape a modern citizenry? These are among the questions addressed in this book, which not only enhances our understanding of diversity among and within the world’s Muslim communities, but also provides ethnographic, historical, and transnational perspectives on contemporary Islam in the shifting landscape of a strategically important region of the world.


Focusing on Malaysia, which has sustained more rapid development than probably any other Muslim nation, Michael Peletz explores the culture, political economy, and history of Islamic courts. He demonstrates that they are centrally involved in the creation and policing of new Malay-Muslim identities (such as middle-class urban dwellers) that the state sees as the basis for a national polity that will be highly competitive. He also shows how and why Islamic courts are key sites in struggles involving ethnic and religious groups, social classes, political parties, and others with a major stake in defining Islam’s role with respect to the maintenance of sovereignty and the achievement of modernity and civil society in an age of globalization.


Peletz deepens our knowledge of Islamic political development in a country very much concerned with forging an Islamic modernity viewed by its leaders as a viable alternative to Western-style modernization.

Michael G. Peletz is W. S. Schupf Professor of Anthropology and Far Eastern Studies in the Department of Sociology and Anthropology at Colgate University. He is the author of A Share of the Harvest and Reason and Passion and coeditor (with Aihwa Ong) of Bewitching Women, Pious Men.

"The author's ethnography is incredibly thorough and rich in detail, which distinguishes this volume among contemporary treatments of Muslim legal systems. Peletz undoubtedly establishes a new standard here. . . . Islamic Modern stands out as a masterful integration of rich ethnography and important themes from contemporary social theory."—Peter Mandaville, International Sociology

"In a brief review it is impossible to convey the rich texture of the material and style of an impressive amount of research over many years. Unquestionably, this volume supercedes the only previous attempt in English . . . in understanding the intersection between the legal, ethical, moral, and customary domains of Muslim family law at the community level."—Judith Nagata, Pacific Affairs

"[Peletz's] evidence is vividly presented. Consequently, this will be a valuable book for cross-cultural comparison for the contribution it makes both to legal anthropology and to understanding the articulation of Islamic values in contemporary settings."—C.W. Watson, Journal of the Royal Anthropological Institute

"This engagingly written study illuminates the workings of Islamic courts and the politics and meanings of Muslim identity in one of Asia's most important 'new tigers.' While elucidating the dynamics of Muslim families and family law, Peletz provides dazzling insights into Malay-Muslim subjectivities and notions of gender, sexuality, and modernity. The result is an intellectual tour de force that should be read by anyone and everyone interested in Islam, democracy, civil society, and the thorny question of just what, in political and sexual terms, it means to be modern."—Robert W. Hefner, author of Civil Islam

"With one out of five people in the world subject to Islamic law this important study of the Malaysian variant is a genuine milestone in our understanding of Muslim law and society. It challenges our appreciation of the power relations between men and women and of the politics of law in building a modern state. This is law not on the books but in daily life. The insights afforded here are central to the broader role Islamic law is playing in the lives of the whole world."—Lawrence Rosen, Princeton University

"This is at once Michael Peletz's most sophisticated and most ambitious book. He is concerned with at least three huge projects: the Islamic resurgence, the Islamic legal system, and cultural politics. This is an evocative, often brilliant book that shows how cosmopolitan politics engineered from Kuala Lumpur have produced a contradictory notion of Asian values that poses an opaque but imminent danger."—Bruce Lawrence, author of Shattering the Myth: Islam Beyond Violence

"Based on impressive fieldwork and archival research, this is the first full-length treatment of Islamic courts in contemporary Malaysia. It makes the important point that, far from being antiquated and out of touch, Islamic courts are helping to make a 'modern' Malaysia."—James Piscatori, coeditor of Muslim Politics