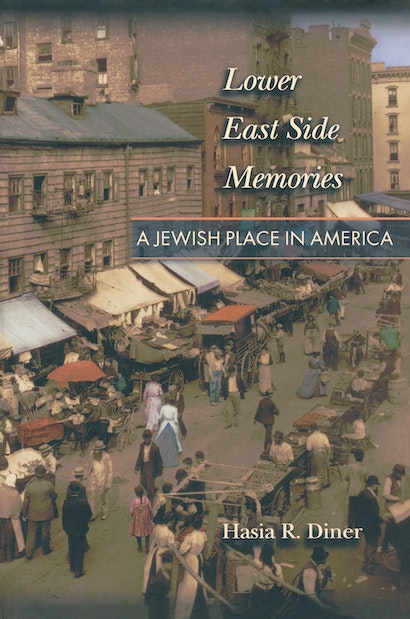 Manhattan’s Lower East Side stands for Jewish experience in America. With the possible exception of African-Americans and Harlem, no ethnic group has been so thoroughly understood and imagined through a particular chunk of space. Despite the fact that most American Jews have never set foot there — and many come from families that did not immigrate through New York much less reside on Hester or Delancey Street — the Lower East Side is firm in their collective memory. Whether they have been there or not, people reminisce about the Lower East Side as the place where life pulsated, bread tasted better, relationships were richer, tradition thrived, and passions flared.


This was not always so. During the years now fondly recalled (1880-1930), the neighborhood was only occasionally called the Lower East Side. Though largely populated by Jews from Eastern Europe, it was not ethnically or even religiously homogenous. The tenements, grinding poverty, sweatshops, and packs of roaming children were considered the stuff of social work, not nostalgia and romance. To learn when and why this dark warren of pushcart-lined streets became an icon, Hasia Diner follows a wide trail of high and popular culture. She examines children’s stories, novels, movies, museum exhibits, television shows, summer-camp reenactments, walking tours, consumer catalogues, and photos hung on deli walls far from Manhattan.


Diner finds that it was after World War II when the Lower East Side was enshrined as the place through which Jews passed from European oppression to the promised land of America. The space became sacred at a time when Jews were simultaneously absorbing the enormity of the Holocaust and finding acceptance and opportunity in an increasingly liberal United States. Particularly after 1960, the Lower East Side gave often secularized and suburban Jews a biblical, yet distinctly American story about who they were and how they got here.


Displaying the author’s own fondness for the Lower East Side of story books, combined with a commitment to historical truth, Lower East Side Memories is an insightful account of one of our most famous neighborhoods and its power to shape identity.

Hasia R. Diner is the Paul S. and Sylvia Steinberg Professor of American Jewish History at New York University. Her books include In the Almost Promised Land: American Jews and Blacks, 1915-1935; A Time for Gathering: The Second Migration, 1820-1880; Erin's Daughters in America: Irish Immigrant Women in the Nineteenth Century; and Hungering for America: Italian, Irish, and Jewish Foodways in the Age of Migration.

"Diner, the inspired historian, has found her way to a particular intersection that no one else has located quite so precisely . . . the exact place where cultural identity, historical myth and geographical location run together, in a tangle of traffic and honking horns, a strangely emotional place. . . ."—Paul Berman, The New York Times Book Review

"In this inventive and often startling reevaluation of popular belief, Diner examines the historical reality of the Lower East Side . . . Diner's research and conclusions are both convincing and original."—Publishers Weekly

". . . In articulate and convincing prose . . . Diner illustrates how American Jews came to romanticize as a place of lost authenticity."—Hope Edelman, The Chicago Tribune

"This is both an enjoyable and important contribution to local and ethnic history."—Booklist

"[An] engaging, informative book, which explores the role of this neighborhood in American Jewish culture . . . Diner lovingly examines the poignant and powerful narrative that has grown up about the neighborhood."—Lev Raphael, The Jerusalem Report

"A useful contribution of American Jewish history."—Morton I. Teicher, The Jerusalem Post

"[A] beautifully written, handsomely illustrated, and powerfully argued book . . . a unique and impressive contribution. It deserves to be read, pondered and debated."—Choice

"A highly readable book. . . . The intelligent perspective of a person steeped in American Jewish history informs the work."—Elisabeth Israels Perry, The Journal of American History

"Hasia Diner has written a richly researched and deeply informed account of the distinctive role New York's Lower East Side holds in American Jewish memory. She knows what the Lower East Side was; her book goes further and tells us what it has become in memory and nostalgia."—Nathan Glazer, Harvard University

"Lower East Side Memories is a powerfully explicated, imaginatively researched, sensitively elaborated, and spiritedly written work of historical scholarship. Few subjects have been so fortunate as to inspire the passion, dedication, imagination, excitement, and scholarly acumen and range that give this book such vibrancy and power."—Moses Rischin, author of The Promised City

"In this pathbreaking book, Hasia Diner significantly advances the field of American Jewish history. Anyone interested in the history of American Jewry, in New York City, or in issues of historical memory will want to read it."—Daniel Soyer, Fordham University