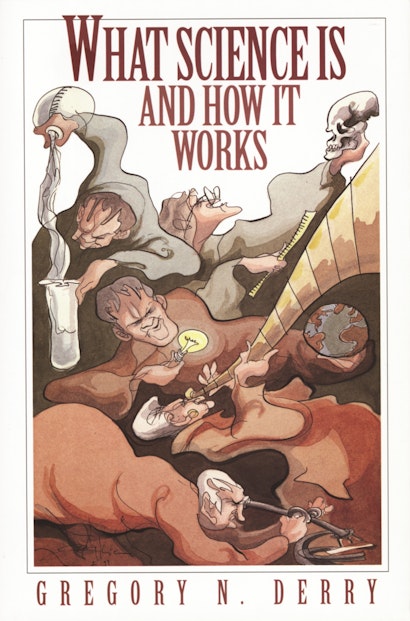 How does a scientist go about solving problems? How do scientific discoveries happen? Why are cold fusion and parapsychology different from mainstream science? What is a scientific worldview? In this lively and wide-ranging book, Gregory Derry talks about these and other questions as he introduces the reader to the process of scientific thinking. From the discovery of X rays and semiconductors to the argument for continental drift to the invention of the smallpox vaccine, scientific work has proceeded through honest observation, critical reasoning, and sometimes just plain luck. Derry starts out with historical examples, leading readers through the events, experiments, blind alleys, and thoughts of scientists in the midst of discovery and invention. Readers at all levels will come away with an enriched appreciation of how science operates and how it connects with our daily lives.


An especially valuable feature of this book is the actual demonstration of scientific reasoning. Derry shows how scientists use a small number of powerful yet simple methods — symmetry, scaling, linearity, and feedback, for example — to construct realistic models that describe a number of diverse real-life problems, such as drug uptake in the body, the inner workings of atoms, and the laws of heredity.


Science involves a particular way of thinking about the world, and Derry shows the reader that a scientific viewpoint can benefit most personal philosophies and fields of study. With an eye to both the power and limits of science, he explores the relationships between science and topics such as religion, ethics, and philosophy. By tackling the subject of science from all angles, including the nuts and bolts of the trade as well as its place in the overall scheme of life, the book provides a perfect place to start thinking like a scientist.

Gregory N. Derry is Associate Professor and Chair of the Physics Department at Loyola College in Baltimore, Maryland. He maintains an active research program in experimental surface physics and pursues such interests as the history and philosophy of science and the science/society interface.

"[There is] no better contemporary book to convey the unity of science and at the same time to stimulate further study."—Choice

"How does a scientist go about solving problems? How do scientific discoveries occur? How is mainstream science different from borderland science and pseudoscience? In this lively and wide-ranging book, Gregory Derry discusses these and other questions as he introduces readers to the scientific way of thinking. . . . Readers of this book will come away with an enriched appreciation of how scientists operate, and how science connects with our daily lives."—Robert J. Deltete, The Quarterly Review of Biology

"An outstanding book by a very fine writer. What Science Is and How It Works delves into the nature of science and along the way meanders into many interesting subjects. It represents a significant contribution in making science more accessible to the layperson."—Robert Ehrlich, author of Nine Crazy Ideas in Science

"Gregory Derry has identified accurately and completely the essential elements of what makes science interesting and what characterizes scientific reasoning. He illustrates his points with well-chosen examples of people, issues, and phenomena."—Mark P. Silverman, author of Waves and Grains: Reflections on Light and Learning