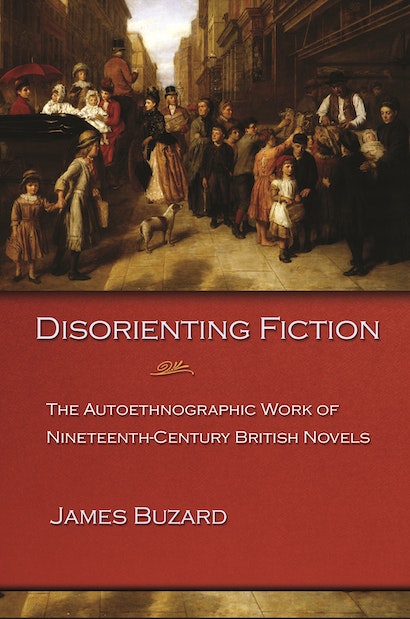 This book gives an ambitious revisionist account of the nineteenth-century British novel and its role in the complex historical process that ultimately gave rise to modern anthropology’s concept of culture and its accredited researcher, the Participant Observer. Buzard reads the great nineteenth-century novels of Charles Dickens, Charlotte Brontë, George Eliot, and others as “metropolitan autoethnographies” that began to exercise and test the ethnographic imagination decades in advance of formal modern ethnography — and that did so while focusing on Western European rather than on distant Oriental subjects.

Disorienting Fiction shows how English Victorian novels appropriated and anglicized an autoethnographic mode of fiction developed early in the nineteenth century by the Irish authors of the National Tale and, most influentially, by Walter Scott. Buzard demonstrates that whereas the fiction of these non-English British subjects devoted itself to describing and defending (but also inventing) the cultural autonomy of peripheral regions, the English novels that followed them worked to imagine limited and mappable versions of English or British culture in reaction against the potential evacuation of cultural distinctiveness threatened by Britain’s own commercial and imperial expansion. These latter novels attempted to forestall the self-incurred liabilities of a nation whose unprecedented reach and power tempted it to universalize and export its own customs, to treat them as simply equivalent to a globally applicable civilization. For many Victorian novelists, a nation facing the prospect of being able to go and to exercise its influence just about anywhere in the world also faced the danger of turning itself into a cultural nowhere. The complex autoethnographic work of nineteenth-century British novels was thus a labor to disorient or de-globalize British national imaginings, and novelists mobilized and freighted with new significance some basic elements of prose narrative in their efforts to write British culture into being.


Sure to provoke debate, this book offers a commanding reassessment of a major moment in the history of British literature.

James Buzard teaches Literature at the Massachusetts Institute of Technology and is the author of The Beaten Track: European Tourism, Literature, and the Ways to "Culture," 1800-1918, as well as of numerous essays on nineteenth- and twentieth-century British literature and culture. He is also coeditor of a forthcoming collection of essays entitled Victorian Prism: Refractions of the Crystal Palace.

"Most exciting to a student of the novel . . . is the book's fresh interpretation of the genre's history in the nineteenth century, the explanation of many of its salient formal features as parts of a cultural project heretofore unnoticed."—Catherine Gallagher, Novel

"This is a splendid piece of work, one that will surely invigorate the discussion of nineteenth-century British fiction. Buzard offers a commanding view of the topic, at once wide-angled and precisely detailed. The substantial introduction is a tour de force—learned, detailed, bracing and dazzling in its theoretical address. It is, by itself, worth the price of admission."—Ian Duncan, University of California, Berkeley

"This is a wonderfully lucid, erudite and provocative book that will speak to anyone interested in the British novel, nineteenth- and twentieth-century British cultural history, or the genealogy and aspirations of contemporary anthropology. It takes issue with received wisdom on all these fronts, and it does so in graceful prose that refuses the assumption that intellectual depth can only find expression in obscurity."—James Eli Adams, Cornell University