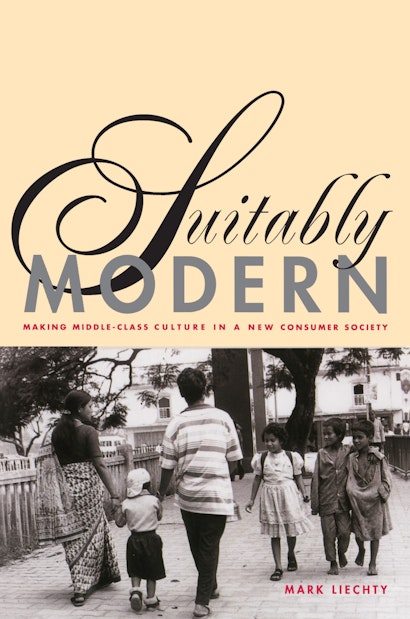 Suitably Modern traces the growth of a new middle class in Kathmandu as urban Nepalis harness the modern cultural resources of mass media and consumer goods to build modern identities and pioneer a new sociocultural space in one of the world’s “least developed countries.”


Since Nepal’s “opening” in the 1950s, a new urban population of bureaucrats, service personnel, small business owners, and others have worked to make a space between Kathmandu’s old (and still privileged) elites and its large (and growing) urban poor. Mark Liechty looks at the cultural practices of this new middle class, examining such phenomena as cinema and video viewing, popular music, film magazines, local fashion systems, and advertising. He explores three interactive and mutually constitutive ethnographic terrains: a burgeoning local consumer culture, a growing mass-mediated popular imagination, and a recently emerging youth culture. He shows how an array of local cultural narratives — stories of honor, value, prestige, and piety — flow in and around global narratives of “progress,” modernity, and consumer fulfillment. Urban Nepalis simultaneously adopt and critique these narrative strands, braiding them into local middle-class cultural life.


Building on both Marxian and Weberian understandings of class, this study moves beyond them to describe the lived experience of “middle classness” — how class is actually produced and reproduced in everyday practice. It considers how people speak and act themselves into cultural existence, carving out real and conceptual spaces in which to produce class culture.

Mark Liechty is Assistant Professor of Anthropology and History at the University of Illinois at Chicago. He is coeditor of the journal Studies in Nepali History and Society.

"This important and clearly written book should be read by anyone interested in understanding how people in the periphery of the capitalist world economy are experiencing the processes of globalization."—Susan Hangen, Journal of Asian Business

"Liechty offers an inspiring cultural analysis of modern life in Nepal that is deeply rooted in history. He thereby connects this seemingly out-of-the-way place to the rest of the world. More generally, Suitably Modern provides a theoretically subtle depiction of middle-class cultural practice that promises to be read by a wide range of scholars interested in class and global capitalism for some time in the future."—Laura Kunreuther, Journal of the History of the Behavioral Sciences

"This penetrating study of consumption practices in Kathmandu captures the emergence of a new kind of class-based cultural experience, one in which media images and purchased goods increasingly serve as instruments of middle-class self-fashioning. As much a study of profound transformations in Nepali society as a whole as it is an analysis of the lived reality of an emergent bourgeois sensibility, Liechty's research offers important insights into the local cultural ramifications of contemporary forms of globalization."—Stacy Pigg, Simon Fraser University

"Providing a well-grounded and at times startling picture of the creation of class identity, Liechty's work succeeds admirably in its goals to document practices of urban middle-class life and the ways these practices produce a newly constituted class. This is a strong, stimulating, and needed contribution to the exciting nascent field of class theory and ethnography in anthropology."—Sara Dickey, Bowdoin College