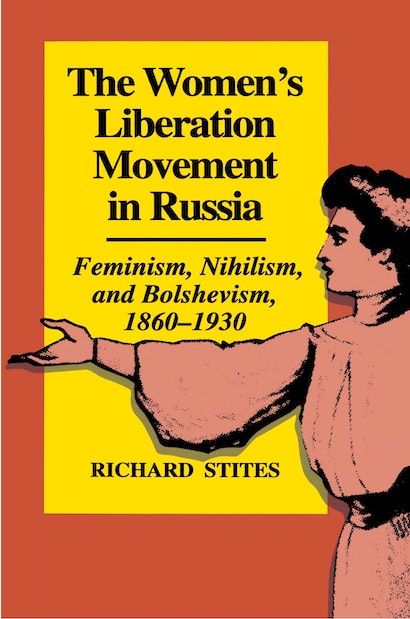 Richard Stites views the struggle for liberation of Russian women in the context of both nineteenth-century European feminism and twentieth-century communism. The central personalities, their vigorous exchange of ideas, the social and political events that marked the emerging ideal of emancipation — all come to life in this absorbing and dramatic account. The author’s history begins with the feminist, nihilist, and populist impulses of the 1860s and 1870s, and leads to the social mobilization campaigns of the early Soviet period.

"This book by Richard Stites stands out as the most comprehensive analytical study of Russian women in the century from Nicholas I to Stalin. Written with verve and wit, with enormous erudition and the highest scholarly standards, this dense survey sets out to investigate the origins of the woman question in the 1850s and 1860s, the rival responses of feminists, nihilists, and political radicals, the division of the women's movement into hostile feminist and socialist camps, and finally the results of the Bolshevik policies directed toward women in the postrevolutionary society. . . . The story told is a fascinating one and a necessary corrective to the essentially male-oriented accounts we have already of the populist, liberal, and Marxist movements."—Ronald Grigor Suny, Review of Politics

"A remarkably sensitive, highly objective, many-sided discussion of the achievements of [this] movement. . . . Richard Stites has given us social history at its very best, one of those rare scholarly works capable of touching the hearts and minds of a wide audience of specialists and nonspecialists alike."—Roberta T. Manning, Journal of Modern History

"Richard Stites's book is alive with events and individuals. It is a dramatic story well told, with understanding for reformers and revolutionaries, and a sensible, balanced assessment of their successes and failures."—Barbara Evans Clements, Journal of Social History

"This is the first narrative history of the Russian women's movement, and it is greatly needed. It provides a whole developing field of study. No one else has Richard Stites' range of knowledge and grasp of sources in this area."—Sheila Fitzpatrick, Columbia University

"Richard Stites has made a unique contribution. He has taken into account the entire published literature, and he offers a comprehensive interpretation. There are no other books on this subject of this scope in any language."—Cyril E. Black, Princeton University