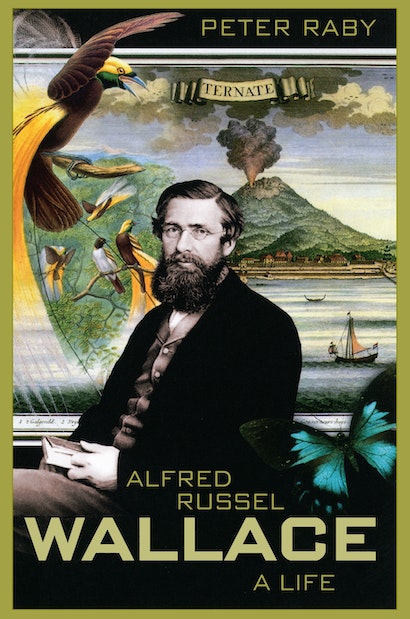 In 1858, Alfred Russel Wallace, aged thirty-five, weak with malaria, isolated in the Spice Islands, wrote to Charles Darwin: he had, he said excitedly, worked out a theory of natural selection. Darwin was aghast — his work of decades was about to be scooped. Within two weeks, his outline and Wallace’s paper were presented jointly in London. A year later, with Wallace still on the opposite side of the globe, Darwin published On the Origin of Species.


This new biography of Wallace traces the development of one of the most remarkable scientific travelers, naturalists, and thinkers of the nineteenth century. With vigor and sensitivity, Peter Raby reveals his subject as a courageous, unconventional explorer and a man of exceptional humanity. He draws more extensively on Wallace’s correspondence than has any previous biographer and offers a revealing yet balanced account of the relationship between Wallace and Darwin.


Wallace lacked Darwin’s advantages. A largely self-educated native of Wales, he spent four years in the Amazon in his mid-twenties collecting specimens for museums and wealthy patrons, only to lose his finds in a shipboard fire in the mid-Atlantic. He vowed never to travel again. Yet two years later he was off to the East Indies on a vast eight-year trek; here he discovered countless species and identified the point of divide between Asian and Australian fauna, ‘Wallace’s Line.’


After his return, he plunged into numerous controversies and published regularly until his death at the age of ninety, in 1913. He penned a classic volume on his travels, founded the discipline of biogeography, promoted natural selection, and produced a distinctive account of mind and consciousness in man. Sensitive and self-effacing, he was an ardent socialist — and spiritualist. Wallace is one of the neglected giants of the history of science and ideas. This stirring biography — the first for many years — puts him back at center stage, where he belongs.

Peter Raby lectures in Drama and English at Homerton College, University of Cambridge. He is the author of the widely praised biography Samuel Butler, Bright Paradise: Victorian Scientific Travellers (Princeton), Fair Ophelia: A Life of Harriet Smithson Berlioz, and Aubrey Beardsley and the 1890s. He also writes extensively on theater and is editor of The Cambridge Companion to Oscar Wilde and The Cambridge Companion to Pinter (forthcoming).

"With this marvelously readable biography of Alfred Russel Wallace, Raby has rescued [this] forgotten pioneer from oblivion. . . . In capturing the cross-grained complexities of this exceptional collector of beetles and birds, Raby gives readers a fascinating specimen of the most mysterious and unpredictable species of all."—Booklist

"Raby's accomplished study is the first in some years and adds greater insight into this likeable underdog's personality."—Publishers Weekly

"Even by Victorian standards, Wallace was a titan of self-effacement. . . . If this well-researched and graceful biography doesn't solve the riddle of Wallace, it nicely conveys the riddle's many dimensions. . . . [Wallace was] a man, in short, who occasionally struck colleagues as a crackpot; and yet, in the end, a man who was in some ways more admirable than the much-admired Darwin."—Robert Wright, New York Times Book Review

"Wallace was the author of some 20 books and 700 other publications. . . . Raby has worked with these sources over several years and supplemented them with examinations of unpublished notebooks and letters. . . . He has produced a congenial account of Wallace's life, major interests, and activities for the general reader."—Gareth Nelson, Science

"Peter Raby's life of Wallace catches the charm, daring, and high- seriousness of the age, while scrupulously measuring Wallace's distinction as a man and a scientist."—Guy Davenport, New Criterion

"[It] provides a focused and balanced narrative of Wallace's life, in which his exotic travels are placed in the context of his eventful life story. . . .I would recommend this tastefully illustrated book to general readers as a good introduction to one of Britain's more charismatic and difficult figures of the nineteenth and early twentieth centuries."—Jane R. Camerini, Nature

"A revealing look at a humble hero of science."—Library Journal

"This authoritative biography is an excellent and inspiring read."—Hannah Atkins, New Scientist

"Raby makes the latter part of Wallace's life as interesting as his years in the bush and cultivates in the reader a great affection for the man and his intellectual and physical energy."—National Geographic Adventure

"Whatever the cause, Wallace has emerged from the shadows and is taking his rightful place in the history of science. Relying heavily on Wallace's published works, Raby's sympathetic, highly conventional biography relates the naturalist's life from start to finish."—Edward J. Larson, Washington Post Book World

"This book provides an excellent way to understand more about one of the key figures [in the history of biology]. . . If even for a moment, Peter Raby is able to allow Alfred Russel Wallace to step out from the shadow of Darwin."—Frank T. Kuserk, Ecology

"Readable, modestly priced, and rich in fascinating observational, personal, and family anecdotes. . . . In his dynamicism, drive, and persistence in the field, Alfred Russel Wallace was remarkable."—Allen Keast, The Quarterly Review of Biology

"An attractive popular introduction to Wallace as a person, set in the context of his life and times."—Sarah Watkinson, Times Literary Supplement

"This delightfully written biography is a real find. The subject is timely, and the author brings a lively sensibility and sympathy to Wallace's situation in the evolutionary story without falling prey to over-sensationalist hysteria. Wallace had a marvelously interesting life and deserves the extensive treatment that he has been given here. The chapters concerning Wallace's travels simultaneously convey the intensity of the experience and the achievements and dangers. Further, he treats the Victorian context with a light and sure touch."—Janet Browne, author of Voyaging, a biography of Charles Darwin