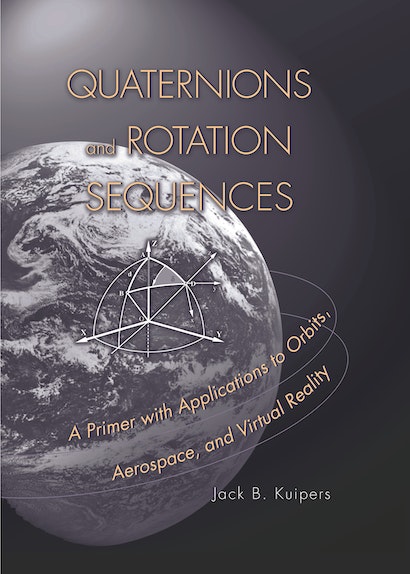 Ever since the Irish mathematician William Rowan Hamilton introduced quaternions in the nineteenth century — a feat he celebrated by carving the founding equations into a stone bridge — mathematicians and engineers have been fascinated by these mathematical objects. Today, they are used in applications as various as describing the geometry of spacetime, guiding the Space Shuttle, and developing computer applications in virtual reality. In this book, J. B. Kuipers introduces quaternions for scientists and engineers who have not encountered them before and shows how they can be used in a variety of practical situations.


The book is primarily an exposition of the quaternion, a 4-tuple, and its primary application in a rotation operator. But Kuipers also presents the more conventional and familiar 3 x 3 (9-element) matrix rotation operator. These parallel presentations allow the reader to judge which approaches are preferable for specific applications. The volume is divided into three main parts. The opening chapters present introductory material and establish the book’s terminology and notation. The next part presents the mathematical properties of quaternions, including quaternion algebra and geometry. It includes more advanced special topics in spherical trigonometry, along with an introduction to quaternion calculus and perturbation theory, required in many situations involving dynamics and kinematics. In the final section, Kuipers discusses state-of-the-art applications. He presents a six degree-of-freedom electromagnetic position and orientation transducer and concludes by discussing the computer graphics necessary for the development of applications in virtual reality.

J. B. Kuipers is Professor Emeritus of Mathematics at Calvin College. In addition to publishing papers and research notes on quaternions, he spent seventeen years in the aerospace industry where his work included developing applications of quaternion theory for aerospace systems. He also developed a six-dimensional graphics system and, as a consequence, is regarded by some as the founder of virtual reality.

"This book will appeal to anyone with an interest in three-dimensional geometry. It is a competent and comprehensive survey. . . . This book is unique in that it is probably the only modern book to treat quaternions seriously. . . . A valuable asset."—Aeronautical Journal

"[A] splendid book . . . everything one could wish for in a primer. It is also beautifully set out with an attractive layout, clear diagrams, and wide margins with explanatory notes where appropriate. It must be strongly recommended to all students of physics, engineering or computer science."—Peter Rowlands, Contemporary Physics

"This is the most complete discussion of quaternions and their applications that I have seen."—Alan C. Tribble, author of A Tribble's Guide to Space