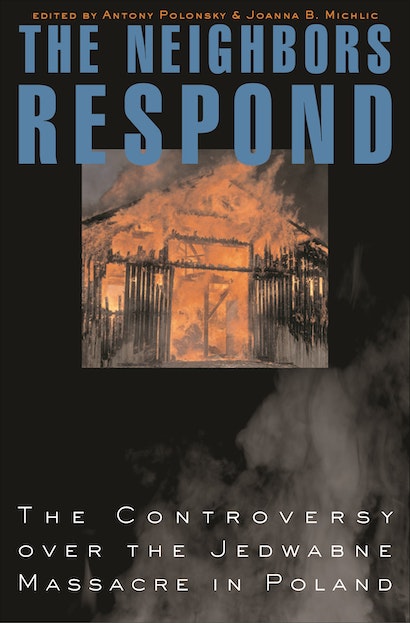 Neighbors — Jan Gross’s stunning account of the brutal mass murder of the Jews of Jedwabne by their Polish neighbors — was met with international critical acclaim and was a finalist for the National Book Award in the United States. It has also been, from the moment of its publication, the occasion of intense controversy and painful reckoning. This book captures some of the most important voices in the ensuing debate, including those of residents of Jedwabne itself as well as those of journalists, intellectuals, politicians, Catholic clergy, and historians both within and well beyond Poland’s borders.


Antony Polonsky and Joanna Michlic introduce the debate, focusing particularly on how Neighbors rubbed against difficult old and new issues of Polish social memory and national identity. The editors then present a variety of Polish voices grappling with the role of the massacre and of Polish-Jewish relations in Polish history. They include samples of the various strategies used by Polish intellectuals and political elites as they have attempted to deal with their country’s dark past, to overcome the legacy of the Holocaust, and to respond to Gross’s book.

The Neighbors Respond makes the debate over Neighbors available to an English-speaking audience — and is an excellent tool for bringing the discussion into the classroom. It constitutes an engrossing contribution to modern Jewish history, to our understanding of Polish modern history and identity, and to our bank of Holocaust memory.

Antony Polonsky is Albert Abramson Professor of Holocaust Studies at Brandeis University and the United States Holocaust Memorial Museum. His books include The Great Powers and the Polish Question. Joanna B. Michlic is a Postdoctoral Fellow at the International Institute of Holocaust Research at Yad Vashem, Jerusalem, and the author of Minority as an Enemy (forthcoming).

"This is a major addition to Holocaust studies for both popular and academic readers. . . . [C]omprehensive, compelling and thoughtful . . . Polonsky and Michlic have done a splendid job of collecting and arranging this material to highlight the inherent intellectual, moral and historical tensions."—Publishers Weekly

"As Polonsky and Michlic persuasively argue, the debate over Neighbors is more than an argument over the massacre of Polish Jews by their gentile countrymen. It is symptomatic of a greater debate over how Poland's history can, or should, be understood in the wake of the war and after the cultural vacuum created by decades of Communist rule."—Library Journal

"The Neighbors Respond is both an important and disturbing book."—Jack Fischel, Jewish Book World

"This is an interesting, highly motivated engagement of a human tragedy reflective of social prejudice that is manifested in any group that premeditatedly considers its relationship with a distinctly different group. It is a telling tale of two peoples, one land, a common tragedy, whose appeal stretches beyond a village in Poland and provides a model for similar studies of other groups in conflict."—Zev Garber, Shofar

"Jan Gross's revelations about the Jedwabne massacre have shaken Polish public opinion such as no other issue since the fall of communism. Now English-speaking readers will be able to sample the richness and complexity of that discussion."—Brian Porter, University of Michigan

"There was a wide range of responses to Jan Gross's Neighbors around the world, for the good reason that the book frankly astonished us when we learned what happened in a tiny Polish village during the Holocaust. Polish citizens murdered their innocent Jewish neighbors in the cold light of day. Reactions to the book in Poland have varied, but in addition to positive accolades, many journalists, clergy, and 'experts' disputed the book's findings and attacked its author. Until this incredibly important volume, most non-Polish speakers have not been able to follow the interesting debates that ensued. This book provides a wealth of information and translates many key Polish reviews and reactions to Neighbors. The editors' scholarship is first-class from beginning to end. There simply is no comparable book."—Robert Gellately, Earl R. Beck Professor of History, Florida State University