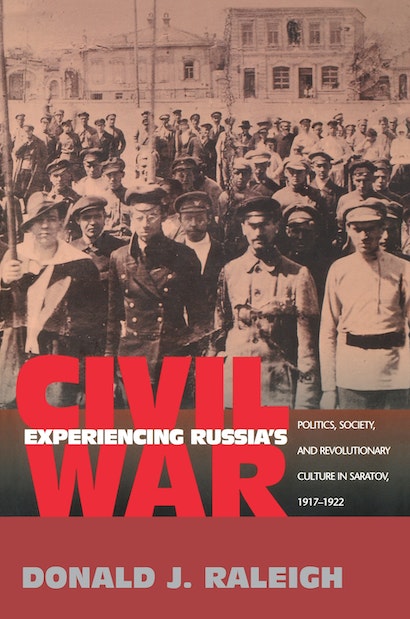 This book is the only comprehensive history of the total experience of the Russian Civil War. Focusing on the key Volga city of Saratov and the surrounding region, Donald Raleigh is the first historian to fully show how the experience of civil war embedded itself into both the people’s and the state’s outlook and behavior. He demonstrates how and why the programs and ideals that had propelled the Bolsheviks into power were so quickly lost and the repressive Soviet party-state was born.

Experiencing Russia’s Civil War is based on exhaustive use of previously classified local and central archives. It is also bold and ambitious in its breadth of thematic coverage, dealing with all aspects of the war experience from institutional evolution and demographics to survival strategies. Complicating our understanding of this formative period, Raleigh provides compelling evidence that many features of the Soviet system that we associate with the Stalin era were already adumbrated and practiced by the early 1920s, as Bolshevism became closed to real alternatives. Raleigh interprets this as the consequence of a complex dynamic shaped by Russia’s political tradition and culture, Bolshevik ideology, and dire political, economic, and military crises starting with World War I and strongly reinforced by the indelible, mythologized experience of survival in the Civil War.

Donald J. Raleigh is Professor of History at the University of North Carolina, Chapel Hill. He has edited and translated many volumes on Russian history and is the author of Revolution on the Volga.

"By revealing the complexity of the civil war in one province, Raleigh's book will revitalize scholarly debate on the civil war."—S. A. Smith, Slavic Review

"An excellent work that will become required reading for all students of this turbulent period in twentieth-century history."—Jack M. Lauber, History: Review of Books

"This book makes an outstanding contribution to scholarship through its exhaustive and shrewd examination of new archival materials. It also makes imaginative and original use of language and ideology as tools of historical interpretation."—N.G.O. Pereira, American Historical Review

"Very readable and convincingly argued, this book is a much needed and anticipated revelation of local experience of the Civil War. This jewel of Soviet studies is not to be missed by any student or scholar of the Soviet Union."—Irina Mukhina, Journal of Social History

"Experiencing Russia's Civil War is a comprehensive political, social, economic, and cultural history of the key Volga city of Saratov during the Russian Civil War. Its great virtue lies in its extraordinary breadth and depth. It is difficult to exaggerate its significance to historiography on the civil war era in Russia and to informed thinking about the Soviet experience generally."—Alexander Rabinowitch, author of The Bolsheviks Come to Power and Prelude to Revolution

"This work will be the first of its kind on the Russian civil war. It is based on prodigious research using archival sources that were utterly off limits to scholars before 1990, from a city that was itself closed to foreigners. It is the first to take seriously the application of the 'cultural turn' to the history of the Russian revolution. Last but no less important, it will be the first comprehensive local study of the civil war. Raleigh has shown the rest of us how it should be done."—Diane P. Koenker, author of Moscow Workers and the 1917 Revolution and coauthor of Strikes and Revolution in Russia, 1917