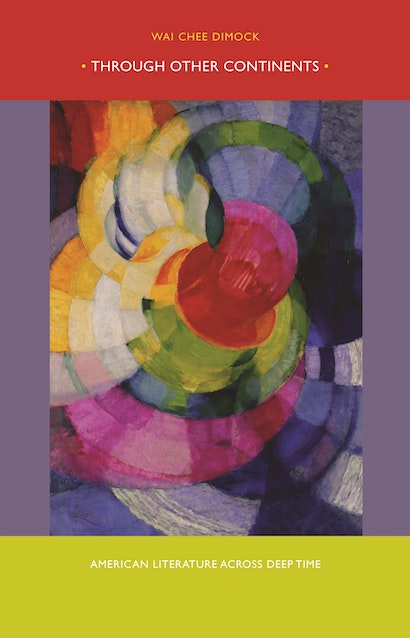 
Inspired by an unorthodox archive — ranging from epic traditions in Akkadian and Sanskrit to folk art, paintings by Veronese and Tiepolo, and the music of the Grateful Dead — Dimock constructs a long history of the world, a history she calls “deep time.” The civilizations of Mesopotamia, India, Egypt, China, and West Africa, as well as Europe, leave their mark on American literature, which looks dramatically different when it is removed from a strictly national or English-language context. Key authors such as Thoreau, Margaret Fuller, Ezra Pound, Robert Lowell, Gary Snyder, Leslie Silko, Gloria Naylor, and Gerald Vizenor are transformed in this light. Emerson emerges as a translator of Islamic culture; Henry James’s novels become long-distance kin to Gilgamesh; and Black English loses its ungrammaticalness when reclassified as a creole tongue, meshing the input from Africa, Europe, and the Americas.


Throughout, Dimock contends that American literature is answerable not to the nation-state, but to the human species as a whole, and that it looks dramatically different when removed from a strictly national or English-language context.

Wai Chee Dimock is William Lampson Professor of English and American Studies at Yale University. She is the author of Empire for Liberty: Melville and the Poetics of Individualism (Princeton) and Residues of Justice: Literature, Law, Philosophy.

"Across Other Continents is a brave attempt at reading outside the box. Dimock's archive is idiosyncratic and her reading practice, as befits her thesis, rhizomatic. She roams broadly over fields of philosophy, science, ethics, anthropology, art history, philology, and religious history to create links between far-flung elements. Occasionally the tendrils that link disparate texts are gossamer thin, while others are startlingly resilient."—Michael Davidson, Novel

"In Through Other Continents Wai Chee Dimock has created a provocative and altogether compelling vision of American literature as a global phenomenon. At once a set of wide-ranging illustrations and a map for the future, her study will permanently alter the boundaries, and therefore the national implications, of American literary scholarship."—Eric J. Sundquist, UCLA

"This is a wonderful book, of the highest importance, which brings to fruition Dimock's recent proposals in a number of articles. I expect the book to be very widely read, discussed, and no doubt debated. The book offers a model not merely for a new way to study American literature, but also the beginnings of a new relation between comparative literature and the study of American literature."—Jonathan Arac, Columbia University

"Through Other Continents makes good on Dimock's proposal for a more imaginative and more capacious reading of not only American literature, but literature in general. It adds a unique voice to current discussions of global culture, literary studies in a postnational frame, transnational cultural studies, and the disciplines of American studies and comparative literature. This is a highly original and thoroughly engaging piece of scholarship."—David Palumbo-Liu, Stanford University

"In a series of bold and brilliant thought experiments, Through Other Continents extends the horizons of 'American literature' as no one has done before. It accomplishes nothing less than the creation of a genuinely new critical framework and idiom for reconceiving the field on a planetary scale. For years Americanists have been calling for a new transnationalism. No one has responded to that call more eloquently and originally than Wai Chee Dimock."—Lawrence Buell, Harvard University