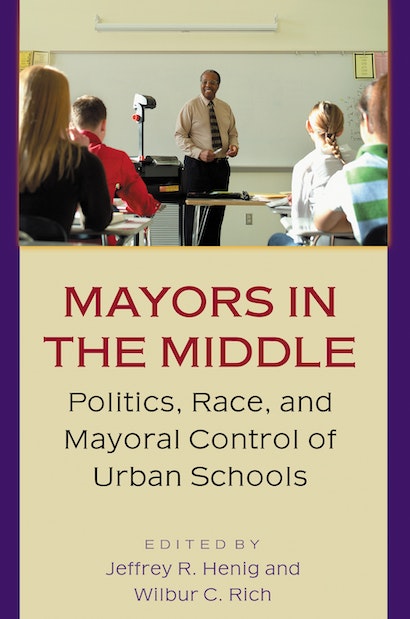 Desperate to jump-start the reform process in America’s urban schools, politicians, scholars, and school advocates are looking increasingly to mayors for leadership. But does a stronger mayoral role represent bold institutional change with real potential to improve big-city schools, or just the latest in the copycat world of school reform du jour? Is it democratic? Why have efforts to put mayors in charge so often generated resistance along racial dividing lines? Public debate and scholarly analysis have shied away from confronting such issues head-on. Mayors in the Middle brings together, for students of education policy and urban politics as well as scholars and school advocates, the most thoughtful and original analyses of the promise and limitations of mayoral takeovers of schools.


Reflecting on the experience of six cities — Baltimore, Boston, Chicago, Detroit, Cleveland, and Washington, D.C. — ten of the nation’s leading experts on education politics tackle the question of whether putting mayors in charge is a step in the right direction. Through the case studies and the wide-ranging essays that follow and build upon them, the contributors — Stefanie Chambers, Jeffrey R. Henig, Kenneth J. Meier, Jeffrey Mirel, Marion Orr, John Portz, Wilbur C. Rich, Dorothy Shipps, and Clarence N. Stone — begin the process of answering questions critical to the future of inner-city children, the prospects for urban revitalization, and the shape of American education in the years to come.

"'Mayors in the Middle' asks and answers the crucial questions education leaders and policymakers need to know about the role and impact of mayors in big cities. Using recent historical cases presented in detail, it demonstrates the very different political and educational trends in each city. Mayors can do some important things to improve education in big cities, but their impact will probably be limited and ephemeral."—Michael W. Kirst, Stanford University

"In an era when political leaders are looking for structural panaceas to solve complex urban school problems, this important and timely analysis judiciously examines the trade-offs inherent in the recent movement toward 'mayor-centric' governance structures. The authors warn that mayoral takeovers are a tool and not a cure-all for long-standing school problems that are inextricably interwoven with issues like race and poverty. Their caveat that the policy outcomes of structural change are invariably less dramatic than reformers expect is particularly significant, as is their judgment that the success of mayor-centric strategies is contingent upon local contexts."—Michael D. Usdan, Senior Fellow, Institute for Educational Leadership

"This superb book refocuses urban politics research on the role of mayors in dealing with two of the most important urban issues: race and education. Students of urban politics, race, and inner-city education will benefit from reading it."—John F. Witte, University of Wisconsin-Madison

"This is a timely work, given the growing interest in reforming the governance of urban education. Addressing a topic of pressing interest to policymakers and community members, Mayors in the Middle can teach us a great deal about urban education and municipal governance. The editors are respected scholars in the areas of education and urban affairs with well-deserved reputations for balance and thoughtfulness. In this volume, Henig and Rich have assembled a solid set of case studies and have coupled those with broader pieces that frame the issue and put the empirical work in useful perspective."—Frederick Hess, American Enterprise Institute

"This book provides a very useful addition to the literature on educational reform, focusing on large cities with mayor-centric educational systems. Its thesis is worthy of consideration by educational scholars and policymakers."—Robert M. Stein, Rice University