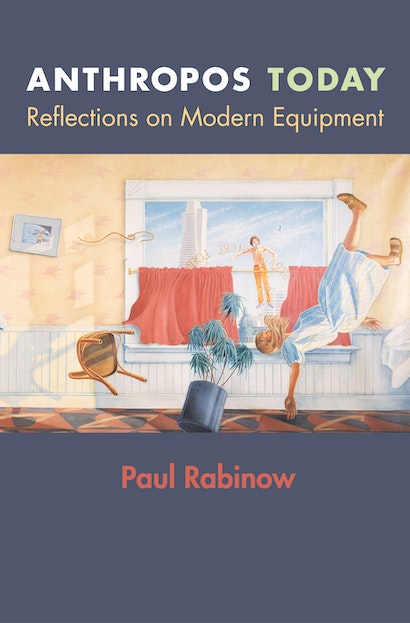 The discipline of anthropology is, at its best, characterized by turbulence, self-examination, and inventiveness. In recent decades, new thinking and practice within the field has certainly reflected this pattern, as shown for example by numerous fruitful ventures into the “politics and poetics” of anthropology. Surprisingly little attention, however, has been given to the simple insight that anthropology is composed of claims, whether tacit or explicit, about anthropos and about logos — and the myriad ways in which these two Greek nouns have been, might be, and should be, connected. Anthropos Today represents a pathbreaking effort to fill this gap.


Paul Rabinow brings together years of distinguished work in this magisterial volume that seeks to reinvigorate the human sciences. Specifically, he assembles a set of conceptual tools — “modern equipment” — to assess how intellectual work is currently conducted and how it might change.

Anthropos Today crystallizes Rabinow’s previous ethnographic inquiries into the production of truth about life in the world of biotechnology and genome mapping (and his invention of new ways of practicing this pursuit), and his findings on how new practices of life, labor, and language have emerged and been institutionalized. Here, Rabinow steps back from empirical research in order to reflect on the conceptual and ethical resources available today to conduct such inquiries.


Drawing richly on Foucault and many other thinkers including Weber and Dewey, Rabinow concludes that a “contingent practice” must be developed that focuses on “events of problematization.” Brilliantly synthesizing insights from American, French, and German traditions, he offers a lucid, deeply learned, original discussion of how one might best think about anthropos today.

Paul Rabinow is Professor of Anthropology at the University of California, Berkeley. His recent books include French DNA: Trouble in Purgatory, Essays on the Anthropology of Reason (Princeton), and Making PCR, A Story of Biotechnology.

"This is an immensely stimulating, riveting work: erudite but highly accessible, wideranging in its curiosity and readings, but coherent. A remarkably mature performance that synthesizes many strands of Rabinow's thought over his career, it speaks articulately to the discontents and predicaments of the present."—George Marcus, Rice University, author of Ethnography through Thick and Thin

"A tour de force. Rabinow's book is pathbreaking. It is quite original (and I don't use that word lightly) and promises to bring fundamental changes not only in anthropology in particular but in the human sciences more generally. The writing sparkles with wit, erudition borne with grace, phrases sparingly but uncommonly turned, and, above all, clarity never compromised."—E. Valentine Daniel, Columbia University, author of Charred Lullabies