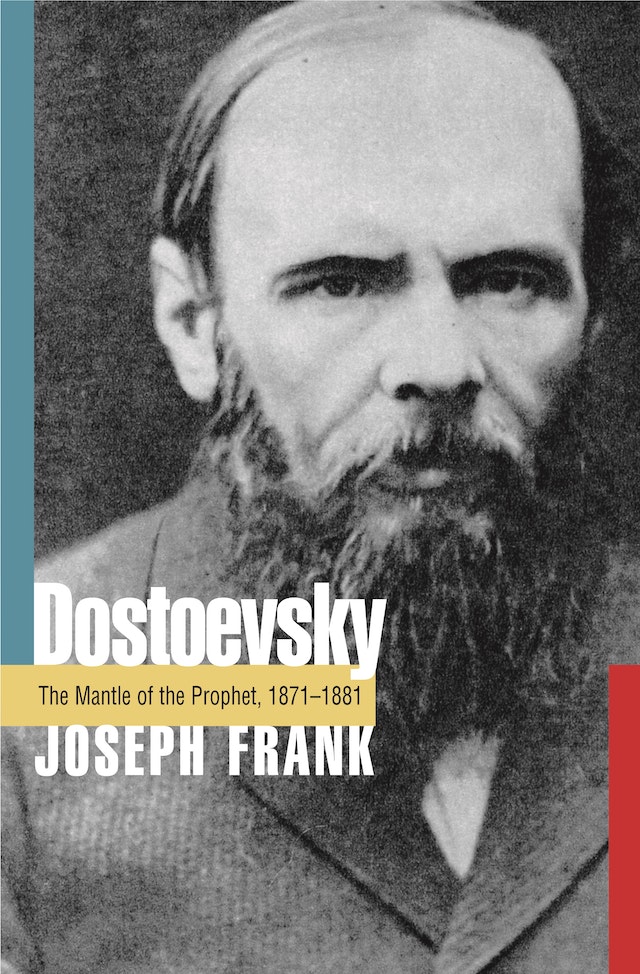 This fifth and final volume of Joseph Frank’s justly celebrated literary and cultural biography of Dostoevsky renders with a rare intelligence and grace the last decade of the writer’s life, the years in which he wrote A Raw Youth, Diary of a Writer, and his crowning triumph: The Brothers Karamazov.


Dostoevsky’s final years at last won him the universal approval toward which he had always aspired. While describing his idiosyncratic relationship to the Russian state, Frank also details Doestoevsky’s continuing rivalries with Turgenev and Tolstoy. Dostoevsky’s appearance at the Pushkin Festival in June 1880, which preceded his death by one year, marked the apotheosis of his career — and of his life as a spokesman for the Russian spirit. There he delivered his famous speech on Pushkin before an audience stirred to a feverish emotional pitch: “Ours is universality attained not by the sword, but by the force of brotherhood and of our brotherly striving toward the reunification of mankind.” This is the Dostoevsky who has entered the patrimony of world literature, though he was not always capable of living up to such exalted ideals.


The writer’s death in St. Petersburg in January of 1881 concludes this unparalleled literary biography — one truly worthy of Dostoevsky’s genius and of the remarkable time and place in which he lived.

Joseph Frank is Professor of Comparative Literature Emeritus at Princeton University and Professor of Comparative Literature and Slavic Languages and Literature Emeritus at Stanford University. Previous volumes of Dostoevsky have received the National Book Critics Circle Award for Biography, two Christian Gauss Awards, two James Russell Lowell Awards of the Modern Language Association, a Los Angeles Times Book Prize, and other honors. In addition to the previous volumes of Dostoevsky, Frank is the author of Through the Russian Prism: Essays on Literature and Culture (Princeton), The Widening Gyre, and The Idea of Spatial Form.

"Frank's work is . . . unrivaled in what it sets out to do and in the remarkable degree to which it succeeds in doing it. It is unquestionably the fullest, most nuanced and evenhanded—not to mention the most informative—account of its subject in any language, and it has significantly changed our understanding of both the man and his work."—Donald Fanger, Los Angeles Times

"A monumental achievement. . . This is not a literary biography in the usual sense of the term. . . . It is, rather, an exhaustive history of Dostoyevsky's mind, an encyclopedic account of the author as major novelist and thinker, essayist and editor, journalist and polemicist. . . . Wrought with tireless love and boundless ingenuity, it . . . [is] a multifaceted tribute from an erudite and penetrating cultural critic to one of the great masters of 19th century fiction."—Michael Scammell, The New York Times Book Review

"Everything about this ambitious enterprise is splendid—its intellectual seriousness, its command of the Russian setting and sources, its modesty of tone, its warm feeling. . . . Frank is clearly on the way toward composing one of the great literary biographies of the age."—Irving Howe, New York Times Book Review

"In his aim of elucidating the setting within which Dostoevsky wrote—personal on the one hand, social, historical, cultural, literary, and philosophical on the other—Frank has succeeded triumphantly."—J. M. Coetzee, New York Review of Books

"[Frank] has created a dramatic unity out of Dostoevsky's chaotic life and art. . . . [His] work will surely remain the classic study of Dostoevsky the anti-utopian humanist."—Aileen Kelly, New York Review of Books

"By the early 1870s, when the final volume of Joseph Frank's magisterial biography begins, Dostoevsky was revered as a seer; his countrymen hung on his every word about Russia and her spiritual destiny. . . . [I]t is impossible not to warm to Dostoevsky in Frank's humane, searching, serious account."—Jackie Wullschlager, Financial Times

"This extraordinary biography succeeds in making both irony and great ideas wholly alive, immediately accessible to us. It is a great work, both of scholarship and of art."—A. S. Byatt, Sunday Times

"Like the life it chronicles, Frank's magisterial biography of Dostoevsky concludes in the radiance of rare achievement. . . . Frank surpasses even the brilliance of [his] earlier volumes in probing the literary genius. . . [and] amplifies Dostoevsky's singular contribution to world literature. . . . A landmark biography."—Booklist

"A fitting conclusion to the previous award-winning volumes, this final volume in Frank's biography is simply magnificent. A brilliant and necessary examination of the great Russian writer and Christian humanist."—Ron Ratliff, Library Journal

"Mr. Frank's biography makes us feel present at the creation of each of Dostoevsky's works. It clears up mysteries and allows us to sense even minor figures as fully realized people. The density of detail biographical, social, and historical along with the surefootedness and subtlety of Mr. Frank's analyses, make this five-volume study not only the finest book on Dostoevsky ever written, but also the best biography of a writer I have ever encountered."—Gary Saul Morson, New York Sun

"Frank carries us through the process by which Dostoyevsky surpassed Dickens and Balzac at turning jounalistic style and issues into overwhelming art. . . . [This] fifth and final volume of Joseph Frank's study of Dostoyevsky marks the end of a period in the growing up of American thought."—Robert L. Belknap, Washington Post

"For anyone seriously interested in Dostoevsky, Frank's magisterial work will be the place to go."—Sam Solecki, The Globe and Mail

"The richest of Frank's monumental work."—Rene Girard, The Weekly Standard

"Peerless is Frank's achievement in this five-volume life. Its clear depiction of Dostoevsky's epoch, its untendentiously critical synopses of the fiction, above all its respect for the artist himself, even when his hopes were fantastic and his fears ominously delusional, will be the despair of competitors for a hundred years."—Thomas L. Jeffers, Commentary

"In this volume, which takes on the last ten years of Dostoevsky's life, Joseph Frank concludes his magnificent biography, a lengthy project miraculously without longueurs. . . . [T]here is a strong and detailed narrative line in these books, and there are lucid accounts of the relation of Dostoevsky's life and work to the many complicated movements of social and political thought in 19th-century Russia."—Michael Wood, London Review of Books

"Impeccably structured and immensely rich in historical and cultural detail, this work crowns a monumental undertaking."—Library Journal, "Best Books of 2002"

"The biographical emphasis of the volume falls on Dostoevsky's populism . . . and his growing popularity and renown in his last five years of his life. . . . [V]olume five of Frank's biography, like all the previous volumes, remains essential reading for anyone interested in Dostoevsky and his times."—Gary Rosenshield, The Russian Review