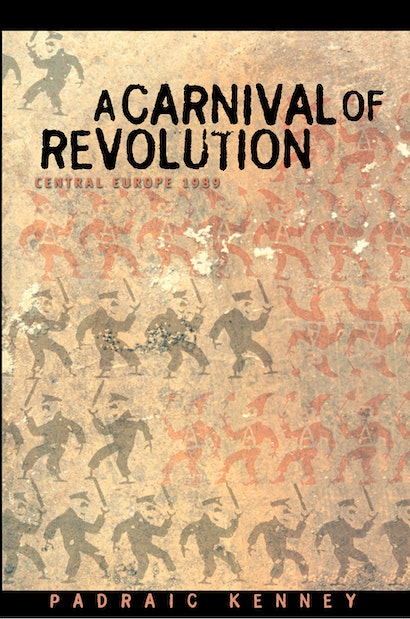 This is the first history of the revolutions that toppled communism in Europe to look behind the scenes at the grassroots movements that made those revolutions happen. It looks for answers not in the salons of power brokers and famed intellectuals, not in decrepit economies — but in the whirlwind of activity that stirred so crucially, unstoppably, on the street. Melding his experience in Solidarity-era Poland with the sensibility of a historian, Padraic Kenney takes us into the hearts and minds of those revolutionaries across much of Central Europe who have since faded namelessly back into everyday life. This is a riveting story of musicians, artists, and guerrilla theater collectives subverting traditions and state power; a story of youthful social movements emerging in the 1980s in Poland, East Germany, Czechoslovakia, Hungary, and parts of Yugoslavia and the Soviet Union.

Kenney argues that these movements were active well before glasnost. Some protested military or environmental policy. Others sought to revive national traditions or to help those at the margins of society. Many crossed forbidden borders to meet their counterparts in neighboring countries. They all conquered fear and apathy to bring people out into the streets. The result was a revolution unlike any other before: nonviolent, exuberant, even light-hearted, but also with a relentless political focus — a revolution that leapt from country to country in the exciting events of 1988 and 1989.

A Carnival of Revolution resounds with the atmosphere of those turbulent years: the daring of new movements, the unpredictability of street demonstrations, and the hopes and regrets of the young participants. A vivid photo-essay complements engaging prose to fully capture the drama. Based on over two hundred interviews in twelve countries, and drawing on samizdat and other writings in six languages, this is among the most insightful and compelling accounts ever published of the historical milestone that ushered in our age.

Padraic Kenney is Professor of European History at the University of Colorado. He is the author of Rebuilding Poland: Workers and Communists, 1945-1950.

"Seminal and indispensable. Using his first-hand acquaintance with many of the key participants in the movements . . . Kenney has given us a pioneering oral history. . . . Strikingly well written, A Carnival of Revolution weaves personal narratives of protest into an illuminating historical analysis of the changing environment in which a new kind of politics developed."—John Gray, Times Literary Supplement

"In wondering at the overnight collapse of communism in Eastern Europe, Western observers have often focused on Gorbachev, Vaclav Havel, the storied opposition in Poland, and the measures of regime failure. These accounts have missed something. Kenney goes back and uncovers the more complex bubbling of events—that helped prepare the way for democracy."—Foreign Affairs

"Using oral history techniques and underground literature, Kenney has woven together stories of many individuals. . . . This new approach is a valuable contribution to the topic and will appeal to both historians and political scientists."—Library Journal

"A Carnival of Revolution acts as a potent corrective to the simplistic and often self-serving accounts of the fall of the Iron Curtain currently in vogue. . . . Padraic Kenney's careful account returns history to its rightful owners, the thousands who risked what little security they had to sneak a little joy into their lives."—Mother Jones

"Assiduous in searching out sources in several countries and languages . . . [Kenney] has gathered together information that no one else has or will. As a result, he has written an account that is essential reading for a full understanding of the revolutions of 1989 and of the younger generations that haunted the last days of Communism."—John J. Kulczycki, International History Review

"I know of no other book telling of so many lesser-known groups and activists involved in a social movement wave across so many countries (not to mention languages). Kenney cobbles their stories together like a master sleuth writing a whodunit, culminating with a series of sketches putting the pieces together as 1989 approaches. It . . . will be a crucial reference for a long time to come."—David Ost, American Historical Review

"Essential reading for a full understanding of the revolution of 1989 and of the younger generation that haunted the last days on Communism."—John J. Kulczycki, International History Review

"Marvelously written, this book gives a strong sense of what it must have felt like to participate in various anticommunist movements in the mid- and late 1980s in Eastern Europe. The stories are well told, with great authority and a deep understanding of many of the complexities actors had to face."—Ákos Róna-Tas, University of California San Diego

"This is a pathbreaking, indispensable book for grasping the complexities of both the pre-1989 and post-revolutionary situation in central Europe. Truly pioneering in both scope and depth, it offers a comprehensive, unconventional, and gripping perspective on the motivations of political mobilization and anti-authoritarian activism. I read it with immense interest and pleasure."—Vladimir Tismaneanu, University of Maryland, author of Fantasies of Salvation

"Padraic Kenney is the first scholar to draw a historical map of the secret reunification of Europe 'from below' that occurred well before the 1989 revolutions brought the results of that job to the surface. This job was accomplished by activists from both communist Central Europe and the West, all of them 'dissidents' at the time in their own societies. Thanks to Kenney's sensitivity to the decidedly 'American' ideas of the founding fathers of the post-1989 new democracies and thanks also to his knowledge of the field, which is unsurpassed by any European researcher, A Carnival of Revolution is a key contribution to the saga of the Central European civil rights movements."—Miklós Haraszti, author of Velvet Prison, founding member of Hungary's Democratic Opposition in the 1970s and 1980s, member of the Hungarian Parliament from 1990-1994

"With a profound first-hand knowledge of participants, encompassing linguistic competence, and engaging prose, Padraic Kenney recreates the simultaneously serious and playful currents of East Europe's overthrow of repressive state socialism. What an invaluable guide to the elusive exhilaration that motivated the actors and captivated all of us who followed the transformation with such hope! We can appreciate neither the ebullience of 1989 nor the disappointment with the quotidian reality that followed without understanding Kenney's 'carnival.'"—Charles S. Maier, Harvard University