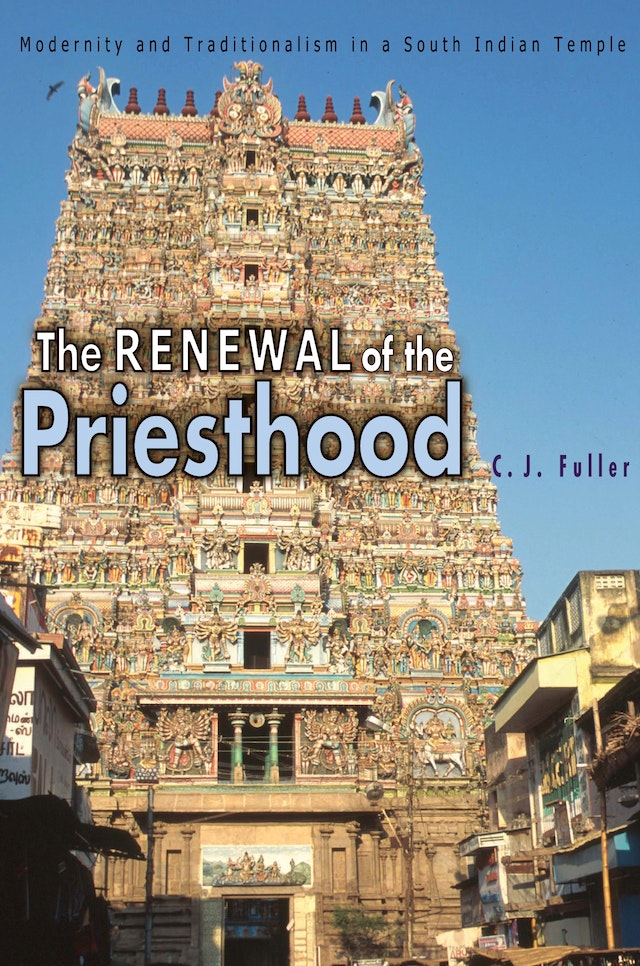 Much has changed for the priests at the Minakshi Temple, one of the most famous Hindu temples in India. In The Renewal of the Priesthood, C. J. Fuller traces their improving fortunes over the past 25 years. This fluidly written book is unique in showing that traditionalism and modernity are actually reinforcing each other among these priests, a process in which the state has played a crucial role.


Since the mid-1980s, growing urban affluence has seen more people spend more money on rituals in the Minakshi Temple, which is in the southern city of Madurai. The priests have thus become better-off, and some have also found new earnings opportunities in temples as far away as America. During the same period, due partly to growing Hindu nationalism in India, the Tamilnadu state government’s religious policies have become more favorable toward Hinduism and Brahman temple priests. More priests’ sons now study in religious schools where they learn authoritative Sanskrit ritual texts by heart, and overall educational standards have markedly improved.


Fuller shows that the priests have become more “professional” and modern-minded while also insisting on the legitimacy of tradition. He concludes by critiquing the analysis of modernity and tradition in social science. In showing how the priests are authentic representatives of modern India, this book tells a story whose significance extends far beyond the confines of the Minakshi Temple itself.

C. J. Fuller is Professor of Anthropology at the London School of Economics and Political Science. His books include The Camphor Flame (Princeton) and Servants of the Goddess.

"This book is beautifully written in a clear style that will make even the most arcane aspects of the priestly profession accessible to undergraduate readers. At the same time, it is a theoretically sophisticated work that will be read widely. No one can write about the Minakshi temple priests with the authority that Dr. Fuller brings to the task. As ethnography the book is unique."—Mattison Mines, author of Public Faces, Private Voices

"In this book, C. J. Fuller has cumulated ethnographic experience and data for twenty-six years and has thus made himself into the consummate ethnographer of the priests of one of the most magnificent temples of South India."—Peter van der Veer, author of Religious Nationalism