A groundbreaking theory of how language arose from primate gestures 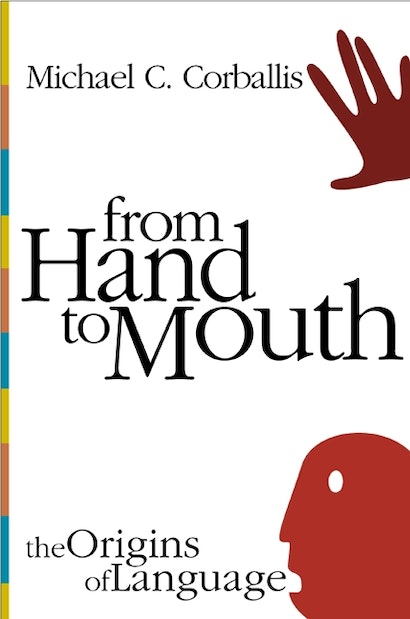 It is often said that speech is what distinguishes us from other animals. But are we all talk? What if language was bequeathed to us not by word of mouth, but as a hand-me-down?

The notion that language evolved not from animal cries but from manual and facial gestures—that, for most of human history, actions have spoken louder than words—has been around since Condillac. But never before has anyone developed a full-fledged theory of how, why, and with what effects language evolved from a gestural system to the spoken word. Marshaling far-flung evidence from anthropology, animal behavior, neurology, molecular biology, anatomy, linguistics, and evolutionary psychology, Michael Corballis makes the case that language developed, with the emergence of Homo sapiens, from primate gestures to a true signed language, complete with grammar and syntax and at best punctuated with grunts and other vocalizations. While vocal utterance played an increasingly important complementary role, autonomous speech did not appear until about 50,000 years ago—much later than generally believed.

Bringing in significant new evidence to bolster what has been a minority view, Corballis goes beyond earlier supporters of a gestural theory by suggesting why speech eventually (but not completely!) supplanted gesture. He then uses this milestone to account for the artistic explosion and demographic triumph of the particular group of Homo sapiens from whom we are descended. And he asserts that speech, like written language, was a cultural invention and not a biological fait accompli.

Writing with wit and eloquence, Corballis makes nimble reference to literature, mythology, natural history, sports, and contemporary politics as he explains in fascinating detail what we now know about such varied subjects as early hominid evolution, modern signed languages, and the causes of left-handedness. From Hand to Mouth will have scholars and laymen alike talking—and sometimes gesturing—for years to come.

Michael C. Corballis (1936–2021) was professor emeritus of psychology at the University of Auckland. His books include The Recursive Mind: The Origins of Human Language, Thought, and Civilization (Princeton) and A Very Short Tour of the Mind: 21 Short Walks around the Human Brain.

"From Hand to Mouth is informative and entertaining. . . . [It] will raise awareness about the importance of gestures and the crucial role they play in communicative interactions."—Dario Maestripieri, American Scientist

"Corballis makes the case that the evolutionary origins of language are in gestures rather than in speech.. . . An engaging story."—Choice

"An engaging, highly readable and provocative account of the evolution of human language. . . . In short, this is an important book on an important topic. . . . From Hand to Mouth should be studied by everyone with a serious interest in the origins of language and read by others who want an evolutionary account that is as entertaining as it is informative."—Joseph B. Hellige, Journal of the International Neuropsychological Society

"A lively and well constructed read that bravely tackles head-on the tough question of where language came from. Corballis intriguingly concludes that this unique human property has gestural rather than vocal origins; and along the way he explores numerous fascinating byways that make this a must read for everyone interested in how humans became the extraordinary creatures they are."—Ian Tattersall, American Museum of Natural History, author of Extinct Humans and The Fossil Trail

"Michael Corballis has accomplished a Herculean task. Reviewing and synthesizing data from a range of disciplines, he has woven it all into a book that is at once enjoyable and easy to read and yet faithful to the complexity of the subject matter. While this is admittedly a provocative work, the author has marshaled considerable evidence in support of his thesis. Indeed, he has done all of us a great service by raising the level of discussion surrounding this controversial topic. This is no small accomplishment."—Sherman Wilcox, University of New Mexico, General Editor, Evolution of Communication

"A fascinating journey along the evolutionary path that 'converted us from wild gesticulators to smooth talkers.' On the path we pass our ape-like ancestors, the change to bipedalism, increase in brain size, gestures, the anatomical requirements for vocalization, and finally the spoken language."—Lewis Wolpert, University College London