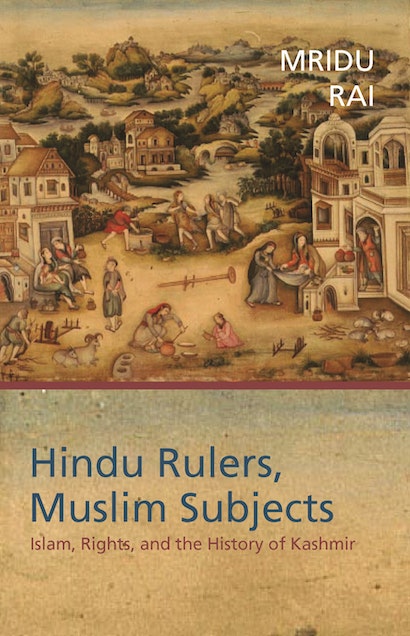 Disputed between India and Pakistan, Kashmir contains a large majority of Muslims subject to the laws of a predominantly Hindu and increasingly “Hinduized” India. How did religion and politics become so enmeshed in defining the protest of Kashmir’s Muslims against Hindu rule? This book reaches beyond standard accounts that look to the 1947 partition of India for an explanation. Examining the 100-year period before that landmark event, during which Kashmir was ruled by Hindu Dogra kings under the aegis of the British, Mridu Rai highlights the collusion that shaped a decisively Hindu sovereignty over a subject Muslim populace. Focusing on authority, sovereignty, legitimacy, and community rights, she explains how Kashmir’s modern Muslim identity emerged.


Rai shows how the princely state of Jammu and Kashmir was formed as the East India Company marched into India beginning in the late eighteenth century. After the 1857 rebellion, outright annexation was abandoned as the British Crown took over and princes were incorporated into the imperial framework as junior partners. But, Rai argues, scholarship on other regions of India has led to misconceptions about colonialism, not least that a “hollowing of the crown” occurred throughout as Brahman came to dominate over King. In Kashmir the Dogra kings maintained firm control. They rode roughshod over the interests of the vast majority of their Kashmiri Muslim subjects, planting the seeds of a political movement that remains in thrall to a religiosity thrust upon it for the past 150 years.

Mridu Rai is Assistant Professor of History at Yale University.

"Rai's contribution lies in the extremely thorough and painstaking documentation that she provides when tracing the marginalization of the native inhabitants of Kahmir, the chicanery of the British, and the fecklessness of the Dogra rulers. Her account of the growth of Muslim religio-political consciousness in the early part of the twentieth century . . . unearths a wealth of detail. . . . Rai's book is a useful one. Those interested in understanding the background of the continuing tragedy in Kahmir will find much to consider in her substantial account of the historical backdrop."—Sumit Ganguly, Journal of Asian Studies

"Hindu Rulers, Muslim Subjects is a brilliant work of historical scholarship that will become indispensable reading for all those interested in the modern history and politics of the subcontinent. It a pioneering historical study of rights, religion, and regional identity in Kashmir that could also inspire future studies on other regions of the subcontinent."—Sugata Bose, Harvard University

"This is a major contribution to Kashmir studies and should set the standard for the next generation of publications on Kashmir. Challenging the existing literature, this work is heady and fresh—and deserves attention."—Alexander Evans, King's College London and the Royal Institute of International Affairs

"Mridu Rai's book reminds us powerfully of the crucial importance of colonial history to the present. She is able to de-essentialize religion and secularism in the Kashmir conflict, which is very useful in light of India's secularist claims and the ways in which some sociologists have theorized those claims. Carefully researched and lucidly conceptualized and written, this book forwards an important thesis on an important topic."—Peter van der Veer, University of Amsterdam