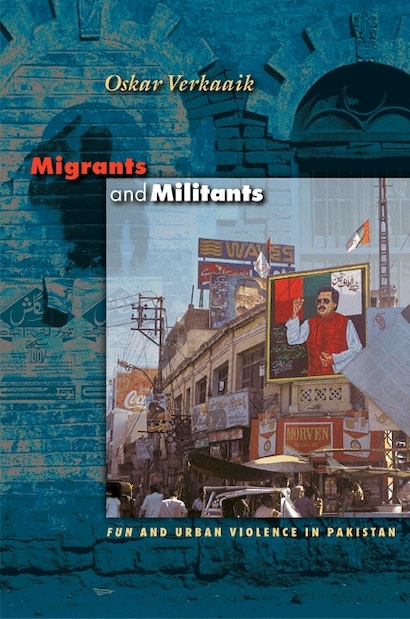 Being part of a violent community in revolt can be addictive — it can be fun. This book offers a fascinating inside look at present-day political violence in Pakistan through a historical ethnography of the Muhajir Qaumi Movement (MQM), one of the most remarkable and successful religious nationalist movements in postcolonial South Asia. The MQM has mobilized much of the “migrant” (Muhajir) population in Karachi and other urban centers in southern Pakistan and has fomented large-scale ethnic-religious violence. Oskar Verkaaik argues that urban youth see it as an irresistible opportunity for “fun.” Drawing on both anthropological fieldwork, including participatory observation among political militants, and historical analyses of state formation, nation-building, and the ethnicization of Islam since 1947, he provides an absorbing and important contribution to theoretical debates about political — religious and nationalist — violence.

Migrants and Militants brings together two perspectives on political violence. Recent studies on ethnic cleansing, genocide, terrorism, and religious violence have emphasized processes of identification and purification. Verkaaik combines these insights with a focus on urban youth culture, in which masculinity, physicality, and the performance of violence are key values. He shows that only through fun and absurdity can a nascent movement transgress the dominant discourse to come of its own. Using these observations, he considers violence as a ludic practice, violence as “martyrdom” and sacrifice, and violence as “terrorism” and resistance.

Oskar Verkaaik is Assistant Professor at the Research Center for Religion and Society, University of Amsterdam, and head of the branch office of the International Institute for Asian Studies. He is the author of A People of Migrants and a popular book in Dutch based on his experiences in Pakistan.

"This book is among those important studies that throw light on the internal complexity of Islamic nations, not least—as is here the case—those where most Muslims live: outside of the Middle East. Not only is it informative, but Verkaaik writes clearly and with an understated wry sense of humor that makes for easy and absorbing reading."—Gananath Obeyesekere, Professor Emeritus, Princeton University

"An ambitious project, successfully realized. Representing a major contribution to our understanding of Pakistani society and of Islamic forms of life in that society, this book has an all too immediate significance in the current political context. We urgently need work of this level of sophistication."—Michael Gilsenan, New York University, author of Lords of the Lebanese Marches