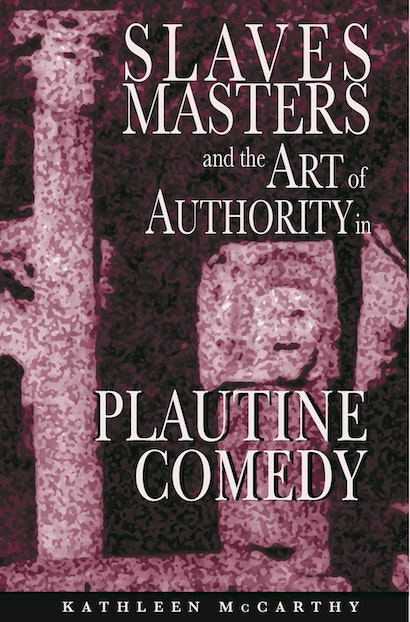 What pleasures did Plautus’ heroic tricksters provide their original audience? How should we understand the compelling mix of rebellion and social conservatism that Plautus offers? Through a close reading of four plays representing the full range of his work (Menaechmi, Casina, Persa, and Captivi), Kathleen McCarthy develops an innovative model of Plautine comedy and its social effects. She concentrates on how the plays are shaped by the interaction of two comic modes: the socially conservative mode of naturalism and the potentially subversive mode of farce. It is precisely this balance of the naturalistic and the farcical that allows everyone in the audience — especially those well placed in the social hierarchy — to identify both with and against the rebel, to feel both the thrill of being a clever underdog and the complacency of being a securely ensconced authority figure.


Basing her interpretation on the workings of farce and naturalism in Plautine comedy, McCarthy finds a way to understand the plays’ patchwork literary style as well as their protean social effects. Beyond this, she raises important questions about popular literature and performance not only on ancient Roman stages but in cultures far from Plautus’ Rome. How and why do people identify with the fictional figures of social subordinates? How do stock characters, happy endings, and other conventions operate? How does comedy simultaneously upset and uphold social hierarchies? Scholars interested in Plautine theater will be rewarded by the detailed analyses of the plays, while those more broadly interested in social and cultural history will find much that is useful in McCarthy’s new way of grasping the elusive ideological effects of comedy.

Kathleen McCarthy is Associate Professor of Classics and Comparative Literature at the University of California, Berkeley.

"A stimulating new study. . . .. Throughout the book McCarthy demonstrates a highly developed sense of the logic of Plautine plays and a great sensitivity to subtle variations and permutations within them."—Ariana Traill, Bryn Mawr Classical Review

"This book is carefully thought through, perceptively argued, and exceptionally readable from first page to last. It should redirect the course of critical and theoretical thinking about Roman comedy for many years to come."—James Tatum, author of Plautus: The Darker Comedies

"This is a fine book, and it makes an important contribution to the understanding of Plautine comedy. It is also exceptionally well written."—David Konstan, author of Sexual Symmetry: Love in the Ancient Novel and Related Genres