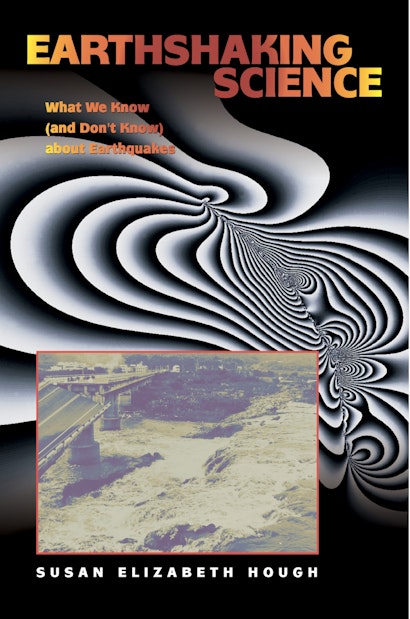 This is the first book to really make sense of the dizzying array of information that has emerged in recent decades about earthquakes. Susan Hough, a research seismologist in one of North America’s most active earthquake zones and an expert at communicating this complex science to the public, separates fact from fiction. She fills in many of the blanks that remained after plate tectonics theory, in the 1960s, first gave us a rough idea of just what earthquakes are about. How do earthquakes start? How do they stop? Do earthquakes occur at regular intervals on faults? If not, why not? Are earthquakes predictable? How hard will the ground shake following an earthquake of a given magnitude? How does one quantify future seismic hazard?


As Hough recounts in brisk, jargon-free prose, improvements in earthquake recording capability in the 1960s and 1970s set the stage for a period of rapid development in earthquake science. Although some formidable enigmas have remained, much has been learned on critical issues such as earthquake prediction, seismic hazard assessment, and ground motion prediction. This book addresses those issues.


Because earthquake science is so new, it has rarely been presented outside of technical journals that are all but opaque to nonspecialists. Earthshaking Science changes all this. It tackles the issues at the forefront of modern seismology in a way most readers can understand. In it, an expert conveys not only the facts, but the passion and excitement associated with research at the frontiers of this fascinating field. Hough proves, beyond a doubt, that this passion and excitement is more accessible than one might think.

Susan Elizabeth Hough is a seismologist with the United States Geological Survey in Pasadena, California, and has published more than forty articles in journals such as Nature, Science, Natural History, and the Journal of Geophysical Research. She has also written occasional editorials on earthquakes for the Los Angeles Times.

" Earthshaking Science takes on the difficult task of reviewing the state of earthquake science at a time when the field is evolving rapidly. Its author, Susan Hough, has done an admirable job of clearly and accurately illuminating the boundary between our knowledge and our ignorance. . . . [She] has written a book that is accessible to readers in other disciplines and to a non-technical audience, but provides enough thoughtful commentary and perspectives to hold the attention of specialists."—Gregory C. Beroza, Nature

"A reader with no background in earth science or seismology can easily absorb the material presented. . . . Hough's writing style is easy and engaging, and she makes the subject matter entertaining."—Mark Zoback, American Scientist

"An excellent outline of how, why and where earthquakes happen. . . . It presents a real picture of a lively research field in all its gritty glory, written with a sharp eye for the absurdities of scientific life. . . . This is an intelligent look at a broad field of science that affects many lives. Anyone heading for an earthquake area should buy a copy."—Sue Bowler, New Scientist

"Earthshaking Science is without equal—literally, a book for everyone. . . . Hough's writing style is exceptionally engaging; she asks copious insightful questions to reveal the current state of knowledge and where research and discovery must lead."—Choice

"This is a very ambitious book. . . . Hough does a good job, and the interested non-scientific reader will come away with a solid knowledge of the topic. . . . [T]hroughout the book [Hough] integrates state-of-the-art research with explanations of earth quake phenomena and attempts to explain many of the current controversies."—Sandy Steacy, Times Higher Education Supplement

"By frankly taking the point of view of a participating seismologist, this book is a fresh contribution to the shelf of science for the public."—Robert Phinney, Princeton University

"I know of no other book for the general public that presents seismic hazards better than Earthshaking Science. It offers a great deal to commend: Hough conveys the big picture really well, and hits the nail on the head with important details."—Paul G. Richards, Lamont-Doherty Earth Observatory, Columbia University

"This book is a major contribution to its field, and an excellent summary of our current approaches to understanding earthquakes. All geoscientists should find it a stimulating read, and others with a reasonable grounding in science will be well rewarded for the time spent with it."—William R. Green, The Leading Edge