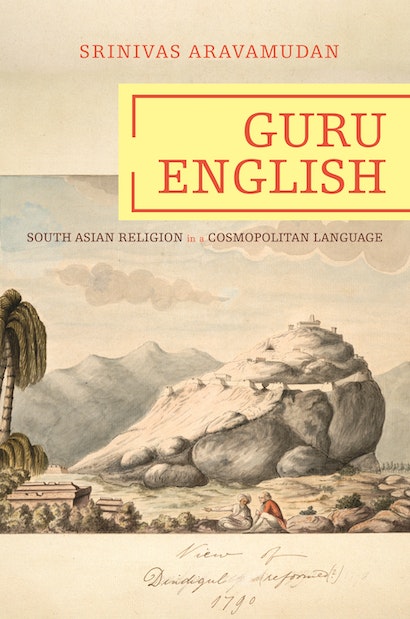 Guru English is a bold reconceptualization of the scope and meaning of cosmopolitanism, examining the language of South Asian religiosity as it has flourished both inside and outside of its original context for the past two hundred years. The book surveys a specific set of religious vocabularies from South Asia that, Aravamudan argues, launches a different kind of cosmopolitanism into global use.


Using “Guru English” as a tagline for the globalizing idiom that has grown up around these religions, Aravamudan traces the diffusion and transformation of South Asian religious discourses as they shuttled between East and West through English-language use. The book demonstrates that cosmopolitanism is not just a secular Western “discourse that results from a disenchantment with religion, but something that can also be refashioned from South Asian religion when these materials are put into dialogue with contemporary social move-ments and literary texts. Aravamudan looks at “religious forms of neoclassicism, nationalism, Romanticism, postmodernism, and nuclear millenarianism, bringing together figures such as Swami Vivekananda, Sri Aurobindo, Mahatma Gandhi, and Deepak Chopra with Rudyard Kipling, James Joyce, Robert Oppenheimer, and Salman Rushdie.

Guru English analyzes writers and gurus, literary texts and religious movements, and the political uses of religion alongside the literary expressions of religious teachers, showing the cosmopolitan interconnections between the Indian subcontinent, the British Empire, and the American New Age.

Srinivas Aravamudan is Associate Professor of English and Director of the John Hope Franklin Humanities Institute at Duke University. He is the author of Tropicopolitans: Colonialism and Agency, 1688-1804.

"A highly engaging, often brilliant and wide-ranging book with broad scholarly appeal. Aravamudan has produced a novel synthesis that goes beyond other works in the field to articulate a vision of the cosmopolitan range of Indic thought within the metropole. The book is an important contribution to postcolonial studies and to scholars working in comparative literature, anthropology, history, and globalization studies."—Bernard Bate, Yale University

"Rich in intelligent readings on a range of topics that are cleverly linked to the resuscitation, re-fashioning, and export of Asian religion."—Bruce Robbins, Columbia University

"Guru English significantly extends the reach of postcolonial criticism by bringing into conversation literary theory and area studies. It presents some of the best analyses to date of the prose through which a colonial construct called 'Indian spiritualism' has found both a market and an afterlife in the contemporary world. Aravamudan's probing examination of the Hindu Right's language of nuclear triumphalism, of Rushdie's writings, and of the promises held out by a long line of transnational gurus—from the Maharishi to Deepak Chopra—will establish him as a major cultural commentator of our times."—Dipesh Chakrabarty, The University of Chicago

"Guru English is an innovative and insightful analysis of the language used during the last two centuries in the discourse on religion in South Asia. The genes of British English were mutated by Indian requirements and the resulting language was indispensable to the redefining of Hinduism. Processed through orientalism, colonialism, and nationalism, it is now moving towards cosmopolitanism and the diaspora. The new texture of this language bears the heightened imprint of cultural and political concerns."—Romila Thapar, Jawaharlal Nehru University, New Delhi, India