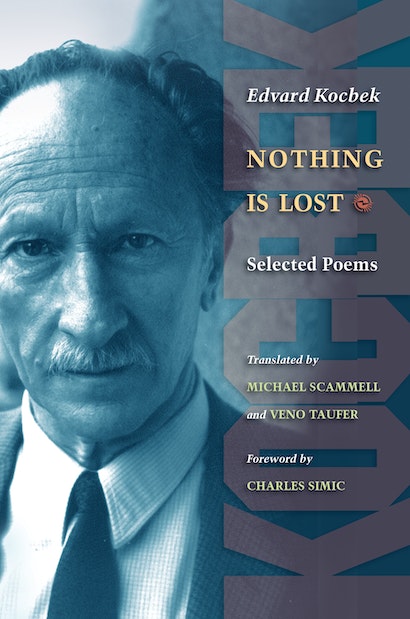 This is the first comprehensive English-language collection of verse by the most celebrated Slovenian poet of modern times and one of Europe’s most notable postwar poets, Edvard Kocbek (1904-1981).


The selections introduce the reader to the full spectrum of Kocbek’s long and distinguished career, starting with the pantheist and expressionist nature poems of his early period and continuing through the politically engaged poetry written during and after World War II, to the philosophical and metaphysical meditations of his fecund late period.


Readers will be struck by the originality and freshness of Kocbek’s sinewy and intense vision, rendered into fluid and idiomatic English by two experienced translators. The Slovenian texts appear on the facing pages.


The opening stanza of “Moon with a Halo”

The man beside me was killed.
He had a mother who bore him
and a father who made him toys,
he had a brother and a playful uncle
and a little girl with blond braids,
he had a wooden cart and a wooden horse,
a trunkful of colored dreams
and a brook where he used to fish.
?

Edvard Kocbek was born in 1904, the son of a church organist, in a part of present-day Slovenia that was then in Austria-Hungary. Following the publication in 1934 of his first book of poetry, he published essays that presaged the wartime alliance of this Christian Socialist with the Tito-led partisan resistance. Despite a lengthy postwar publication ban, Kocbek went on to win the Preseren Prize, Slovenia's highest literary award, in 1964. More books of both poetry and prose followed, including his Collected Poems in 1977, which sealed his reputation as Slovenia's greatest modern-day poet. Michael Scammell, who teaches writing in Columbia University's School of the Arts, has translated widely from Russian, Serbo-Croatian, and Slovenian, including works by Tolstoy and Nabokov. Veno Taufer, the author of sixteen volumes of poetry in his native Slovenia and the translator of more than forty books of poetry, is the recipient of the Preseren Prize and several prestigious international awards. His verse, including the collection Waterlings (Northwestern, 2000), has been translated into numerous languages.

"Edvard Kocbek is a major Slovenian poet. For the past few months, I've been carrying around and traveling with Nothing Is Lost, his selected poems eloquently translated by Michael Scammell and Veno Tauffer. This marvelous body of work spans more than 40 years and confirms that Kocbek belongs in the company of other notable East European poets. . . . Reading [his poems] now, one feels that his pastoral sensibility and vital intimacy with nature, which at times feels mystical, were always infused with a painful sense of time, an agonized feeling of cosmic sorrow."—Edward Hirsch, Washington Post Book World

"Had Edvard Kocbek not belonged to a small nation and a language of extremely limited diffusion, he would now be numbered among the major poets of the postwar era. This is an extremely valuable book. The translations are impeccable, lucid, and eloquent."—Daniel Weissbort