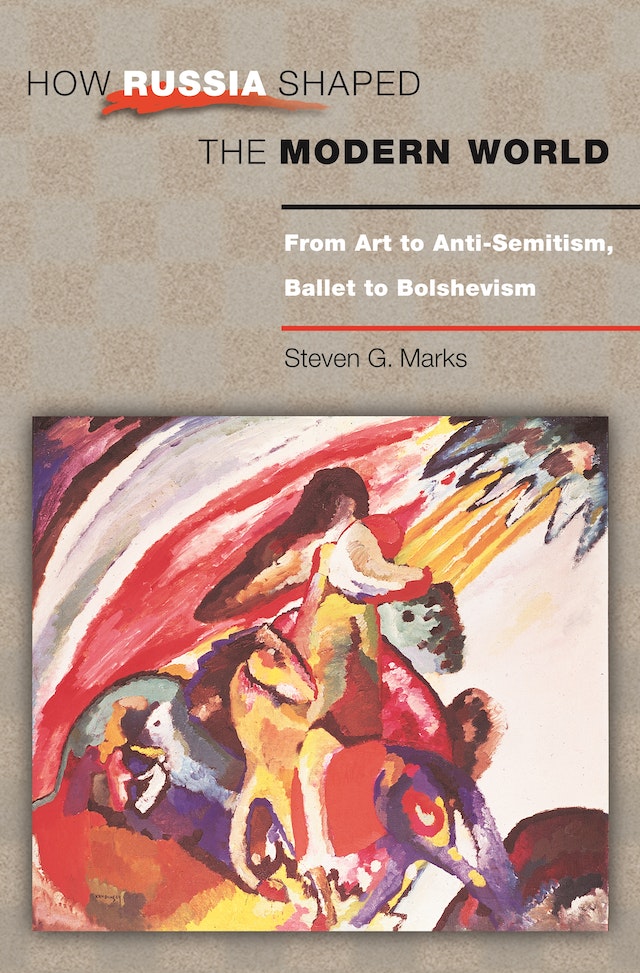 In this sweeping history, Steven Marks tells the fascinating story of how Russian figures, ideas, and movements changed our world in dramatic but often unattributed ways.


On Europe’s periphery, Russia was an early modernizing nation whose troubles stimulated intellectuals to develop radical and utopian alternatives to Western models of modernity. These provocative ideas gave rise to cultural and political innovations that were exported and adopted worldwide. Wherever there was discontent with modern existence or traditional societies were undergoing transformation, anti-Western sentiments arose. Many people perceived the Russian soul as the antithesis of the capitalist, imperialist West and turned to Russian ideas for inspiration and even salvation.


Steven Marks shows that in this turbulent atmosphere of the past century and a half, Russia’s lines of influence were many and reached far. Russia gave the world new ways of writing novels. It launched cutting-edge trends in ballet, theater, and art that revolutionized contemporary cultural life. The Russian anarchist movement benignly shaped the rise of vegetarianism and environmentalism while also giving birth to the violent methods of modern terrorist organizations. Tolstoy’s visions of nonviolent resistance inspired Gandhi and the U.S. Civil Rights movement at the same time that Russian anti-Semitic conspiracy theories intoxicated right-wing extremists the world over. And dictators from Mussolini and Hitler to Mao and Saddam Hussein learned from the experiments of the Soviet regime.


Moving gracefully from Moscow and St. Petersburg to Beijing and Berlin, London and Luanda, Mexico and Mississippi, Marks takes us on an intellectual tour of the Russian exports that shaped the twentieth century. The result is a richly textured and stunningly original account of the extent to which Russia — as an idea and a producer of ideas — has contributed to the making of the modern world. Placing Russia in its global context, the book betters our understanding of the anti-Western strivings that have been such a prominent feature of recent history.

Steven G. Marks is Professor of History at Clemson University and the author of Road to Power: The Trans-Siberian Railroad and the Colonization of Asian Russia, 1850 -1917.

"[Marks] examines the way that Russian ideas, social models and political programs have spread across the wider world. . . . The coverage is broad: from Marx to Marks, so to speak. The book is clear, often understated and always unpretentious; it contains several refreshingly sane and lucid accounts of complex and emotive subjects. It also managed not to be bland."—Stephen Lovell, Times Literary Supplement

"A valuable, accessible, and comprehensive guide. . . . A rich example of the capacity of intellectual history to carry us across borders and over centuries. . . . It is highly recommended for a broad readership."—Anne Gorsuch, History Today

"A scholarly and thought-provoking book."—Choice

"A number of books have explored the West's long and controversial influence on Russia. Few, however, have explored the reverse flow of ideas, and none better than this concise, graceful, amazingly wide-ranging book."—Robert Legvold, Foreign Affairs

"An extraordinarily wide-ranging and exhaustively researched study of Russia's influence on the world from the 1880s to the present. . . . [A] fascinating, complex, and rich text that makes compelling arguments about Russia's influence upon the world. This work should be of interest not only to many Russianists, but also to a more general audience with little or no background in Russia."—Rebecca Epstein Matveyev, Slavic and East European Journal

"This is an imaginative, synthetic, and stimulating exploration of one of the major phenomena of our world, the Russian contribution to the revolt against the modern west. . . . [It] is a marvelous introduction to that antimodern revolution for the general reader, the student, and even the specialist."—Robert C. Williams, Slavic Review

"Deep, perceptive, and thought provoking, this is a work of breathtaking sweep and imagination, massive learning, and unflagging interest. It is also beautifully written—flowing and full of intellectual excitement."—Richard Stites, Georgetown University

"This is an astonishingly broad and ambitious project, one that at first seems impossible but then slowly grows on the reader—in plausibility, synthesizing intelligence, and explanatory power. Marks seems to know the contours of everything relating to Russian ideas, their politics as well as their expression through literature, visual art, dance, theater, both in domestic contexts and around the world. His thesis will cause a stir. But Russian culture has rarely appeared as monumentally integrated and influential as within the pages of this book."—Caryl Emerson, Princeton University