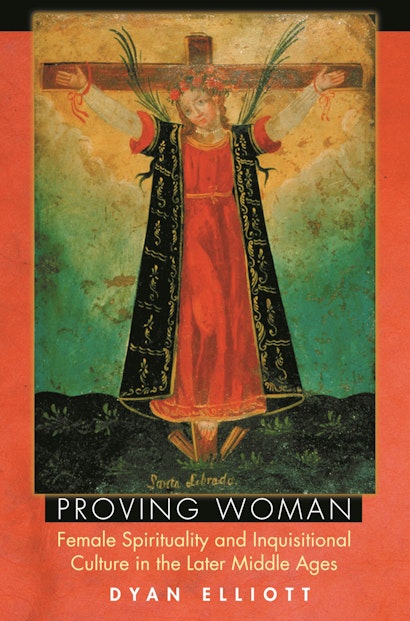 Around the year 1215, female mystics and their sacramental devotion were among orthodoxy’s most sophisticated weapons in the fight against heresy. Holy women’s claims to be in direct communication with God placed them in positions of unprecedented influence. Yet by the end of the Middle Ages female mystics were frequently mistrusted, derided, and in danger of their lives. The witch hunts were just around the corner.


While studies of sanctity and heresy tend to be undertaken separately, Proving Woman brings these two avenues of inquiry together by associating the downward trajectory of holy women with medieval society’s progressive reliance on the inquisitional procedure. Inquisition was soon used for resolving most questions of proof. It was employed for distinguishing saints and heretics; it underwrote the new emphasis on confession in both sacramental and judicial spheres; and it heralded the reintroduction of torture as a mechanism for extracting proof through confession.


As women were progressively subjected to this screening, they became ensnared in the interlocking web of proofs. No aspect of female spirituality remained untouched. Since inquisition determined the need for tangible proofs, it even may have fostered the kind of excruciating illnesses and extraordinary bodily changes associated with female spirituality. In turn, the physical suffering of holy women became tacit support for all kinds of earthly suffering, even validating temporal mechanisms of justice in their most aggressive forms. The widespread adoption of inquisitional mechanisms for assessing female spirituality eventuated in a growing confusion between the saintly and heretical and the ultimate criminalization of female religious expression.

Dyan Elliott is Professor of History and Adjunct Professor of Religious Studies at Indiana University. She is the author of Spiritual Marriage: Sexual Abstinence in Medieval Wedlock (Princeton) and Fallen Bodies: Pollution, Sexuality, and Demonology in the Middle Ages.

"By revealing the importance of gender-related issues where we had not seen them, [Dyan Elliot] presents that familiar picture in a new, indeed unfamiliar, light."—John Coakley, American Historical Review

"In this provocative and forceful book, Dyan Elliott considers the impact of an institutional procedure on the phenomena it was used to assess. Proving Woman examines sacramental confession, the inquisition of heretics, and the discernment of spirits as parallel cases of a growing medieval concern with the "proving" of spirituality, especially that of women, by an increasingly skeptical clergy. Elliott carefully sifts through primary sources in diverse genres, including many little-known texts, in her characteristically sharp and lucid prose."—Barbara Newman, Northwestern University

"Elliott has written a very smart book; it is complex, subtle and challenging, and an important work of scholarship."—Penelope D. Johnson, New York University