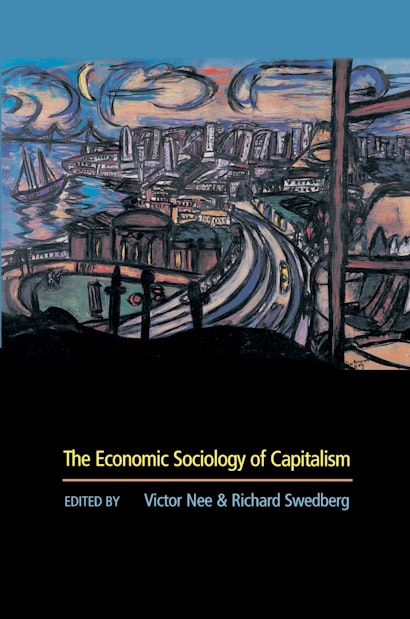 This book represents a major step forward in the use of economic sociology to illuminate the nature and workings of capitalism amid the far-reaching changes of the contemporary era of global capitalism. For the past twenty years economic sociologists have focused on mesa-level phenomena of networks, but they have done relatively little to analyze capitalism as an overall system or to show how such phenomena emerge from and shape the dynamics of capitalism. The Economic Sociology of Capitalism seeks to change this, by presenting both big-picture analyses of capitalism and more focused pieces on institutions crucial to capitalism.


The book, which includes sixteen chapters by leading scholars in economic sociology, is organized around three broad themes. The first section addresses core issues and problems in the new study of capitalism; the second considers a variety of topics concerning America, the leading capitalist economy of the world; and the third focuses attention on the question of convergence stemming from the global transformation of capitalism and the challenge of explaining institutional change.

"By proposing a shift of focus for economic sociology in an important and so far underinvestigated realm, this book represents a significant advancement in the further development of the field. What has been underemphasized in the new economic sociology, the editors rightly claim, is a more macro-oriented investigation of the operation of capitalism as an economic and social system. The high quality contributions in The Economic Sociology of Capitalism address concerns that have stood at the center of classical works in economic sociology by Weber, Durkheim, Polányi, and Schumpeter which are still important and will find more attention through this volume."—Jens Beckert, Georg-August-Universität Göttingen, author of Beyond the Market

"An excellent contribution to the field. Not only are the editors and authors leading figures in the social sciences, but the individual contributions are always good and sometimes outstanding. Importantly, the book goes well beyond previous collections on economic sociology, which have overrelied on 'oppositional identity' with regard to economics and have been satisfied for too long with poking holes in specific economic arguments rather than developing coherent sociological ones. From the opening through all of the chapters, this book takes economics seriously—a necessary starting point for an effective economic sociology. Its focus on the institutions of capitalism represents an important first step to constructing economic-sociological theory. The chapters are varied in style and subject, which makes the book interesting and substantively rewarding."—Paul Ingram, Columbia University