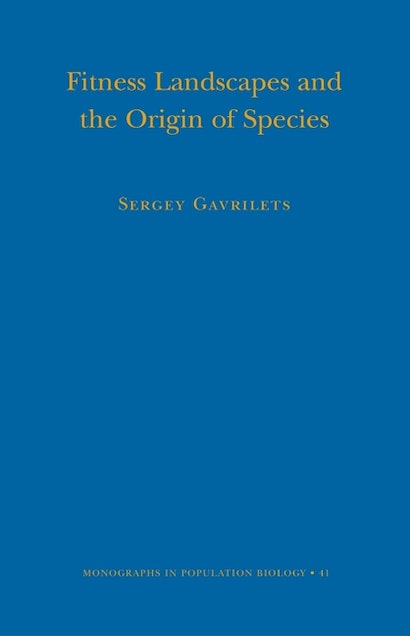 The origin of species has fascinated both biologists and the general public since the publication of Darwin’s Origin of Species in 1859. Significant progress in understanding the process was achieved in the “modern synthesis,” when Theodosius Dobzhansky, Ernst Mayr, and others reconciled Mendelian genetics with Darwin’s natural selection. Although evolutionary biologists have developed significant new theory and data about speciation in the years since the modern synthesis, this book represents the first systematic attempt to summarize and generalize what mathematical models tell us about the dynamics of speciation.

Fitness Landscapes and the Origin of Species presents both an overview of the forty years of previous theoretical research and the author’s new results. Sergey Gavrilets uses a unified framework based on the notion of fitness landscapes introduced by Sewall Wright in 1932, generalizing this notion to explore the consequences of the huge dimensionality of fitness landscapes that correspond to biological systems.


In contrast to previous theoretical work, which was based largely on numerical simulations, Gavrilets develops simple mathematical models that allow for analytical investigation and clear interpretation in biological terms. Covering controversial topics, including sympatric speciation and the effects of sexual conflict on speciation, this book builds for the first time a general, quantitative theory for the origin of species.

Sergey Gavrilets is Professor of Ecology and Evolutionary Biology and Mathematics at the University of Tennessee. His many scientific articles have appeared in Nature, Proceedings of the National Academy of Sciences, Proceedings of the Royal Society of London, and other publications.

"This is a . . . rich book, full of sober, well-considered insights, and there is a sense of real progress in understanding the variety of situations in which speciation can occur. Any investment in this book is well rewarded."—Brett Calcott, Austral Ecology

"A landmark work. This is the first systematic summary of the mathematical theory of speciation, and Dr. Gavrilets, whose work has changed the field in recent years, is the most qualified person to have written it. There is no comparable book."—Günter Paul Wagner, Yale University

"Undoubtedly a significant contribution. The book will be valuable not only in speciation theory but beyond the theoretical realm, to empirical scientists working on speciation, to evolutionary biologists more broadly, and to mathematicians interested in the applications. The scholarship is excellent, and the logical organization is impeccable."—Roger Butlin, University of Leeds

"This is a book that has been needed for a long time, but it required someone of Sergey Gavrilets's breadth and depth of understanding of both evolutionary biology and mathematical modeling. Gavrilets has already infused evolutionary biology with highly innovative ways of thinking about the structure of natural selection and the dynamics of evolution, using novel mathematical models to probe difficult ideas. Here he analyzes past work critically and adopts a clear viewpoint of his own, complete with a rich set of models that support that viewpoint. He does so in a way that makes the ideas accessible both to empirical evolutionary researchers and applied mathematicians."—John N. Thompson, University of California, Santa Cruz

"This is the first book I have read about speciation that actually presents the topic in an objective way, rather than carrying on the fifty-year tradition of strong opinions without critical evidence. Gavrilets does a splendid job of building all of the models and discussing their implications."—John A. Endler, University of California, Santa Barbara