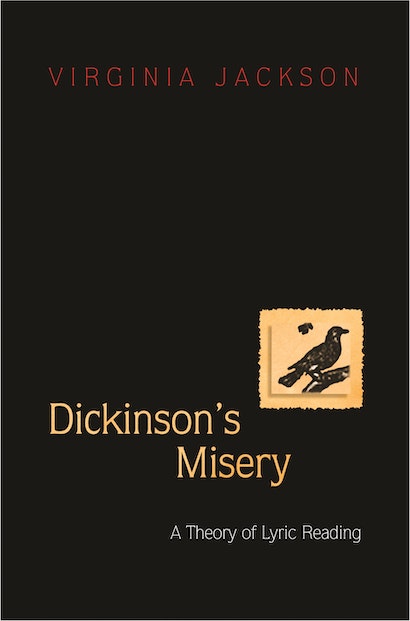 How do we know that Emily Dickinson wrote poems? How do we recognize a poem when we see one? In Dickinson’s Misery, Virginia Jackson poses fundamental questions about reading habits we have come to take for granted. Because Dickinson’s writing remained largely unpublished when she died in 1886, decisions about what it was that Dickinson wrote have been left to the editors, publishers, and critics who have brought Dickinson’s work into public view. The familiar letters, notes on advertising fliers, verses on split-open envelopes, and collections of verses on personal stationery tied together with string have become the Dickinson poems celebrated since her death as exemplary lyrics.


Jackson makes the larger argument that the century and a half spanning the circulation of Dickinson’s work tells the story of a shift in the publication, consumption, and interpretation of lyric poetry. This shift took the form of what this book calls the “lyricization of poetry,” a set of print and pedagogical practices that collapsed the variety of poetic genres into lyric as a synonym for poetry.


Featuring many new illustrations from Dickinson’s manuscripts, this book makes a major contribution to the study of Dickinson and of nineteenth-century American poetry. It maps out the future for new work in historical poetics and lyric theory.

Virginia Jackson is Associate Professor of English at New York University. She publishes on various aspects of nineteenth-century American poetic culture, on historical poetics, and on lyric theory.

"Beautifully written, witty, incisive, learned, savvy, generous, and generative, Dickinson's Misery has no contemporary peer, synthesizing as it does knowledge of a vast range of relevant philosophy, poetic theory, and poetry as Jackson's inquiry opens up territories none other has thought to explore."—Martha Nell Smith, American Literature

"Jackson seeks to engage with the reader in exploring various theories of the lyric, and to find a way into a range of lyric genres (songs, notes, letters, elegies, valentines, verse) in order to consider them as alternatives to a singular idea of the lyric. The book is beautifully illustrated with a range of Dickinson material which allows the reader to appreciate the images of her writing as an essential element in 'reading' the past."—The Year's Work in English Studies

Dickinson's Misery is our luxury. This rich and rewarding study uncovers intellectual value where no one thought to look for it before: in the envelopes, clippings, pictures, flowers, and dead insects that so often accompanied a Dickinson lyric. A lively, mischievous, and memorable book."—Diana Fuss, Princeton, author of The Sense of an Interior: Four Writers and the Rooms that Shaped Them and Essentially Speaking: Feminism, Nature, and Difference.

"Dickinson's Misery stunningly combines scrupulous historical and theoretical explorations of Dickinson's bizarre poetic practices, and in so doing it opens the most fundamental questions about what critics and readers since Dickinson have come to call the "lyric." Future writing on poetry in nineteenth-century America and on the nature of lyric and lyrical reading will need to address Jackson's searching arguments."—Jonathan Culler, Cornell University, author of On Deconstruction

"Who doubts that Emily Dickinson wrote lyric poems? Yet this turns out to be one of those truisms that dissolves in the face of simple attention. By showing how much we normalize the strange things that Dickinson wrote precisely by reading them as lyrics, Jackson has written a book that earns its subtitle: a theory of lyric reading. This is one of the most inventive and observant books yet written on Dickinson, but it is more than that: I know of no better study of the performative character of reading, nor of any book that does more to open our eyes to just how little we know about the range of genres and styles of reading in the past."—Michael Warner, Rutgers University