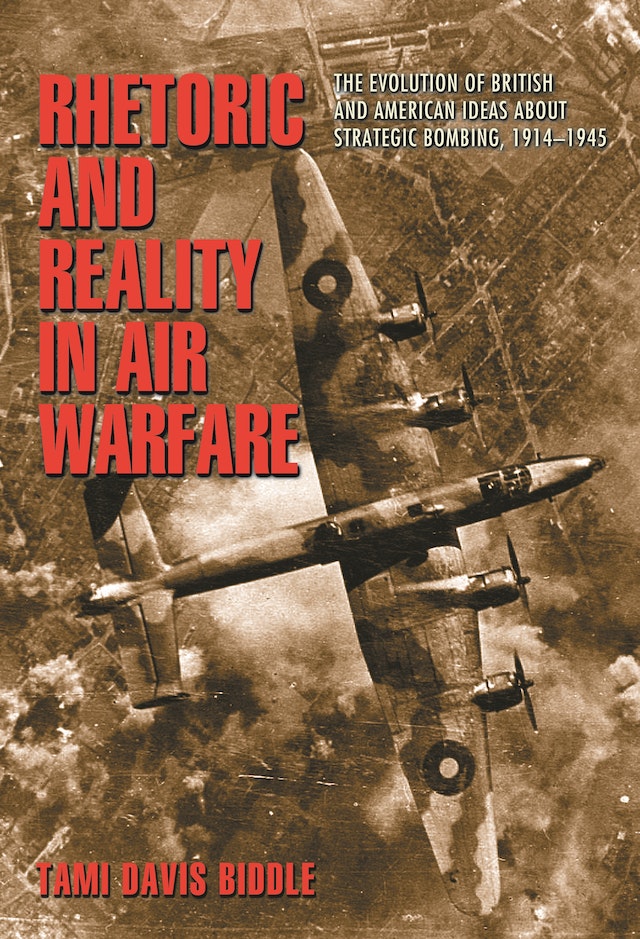 A major revision of our understanding of long-range bombing, this book examines how Anglo-American ideas about “strategic” bombing were formed and implemented. It argues that ideas about bombing civilian targets rested on — and gained validity from — widespread but substantially erroneous assumptions about the nature of modern industrial societies and their vulnerability to aerial bombardment. These assumptions were derived from the social and political context of the day and were maintained largely through cognitive error and bias. Tami Davis Biddle explains how air theorists, and those influenced by them, came to believe that strategic bombing would be an especially effective coercive tool and how they responded when their assumptions were challenged.


Biddle analyzes how a particular interpretation of the World War I experience, together with airmen’s organizational interests, shaped interwar debates about strategic bombing and preserved conceptions of its potentially revolutionary character. This flawed interpretation as well as a failure to anticipate implementation problems were revealed as World War II commenced. By then, the British and Americans had invested heavily in strategic bombing. They saw little choice but to try to solve the problems in real time and make long-range bombing as effective as possible.


Combining narrative with analysis, this book presents the first-ever comparative history of British and American strategic bombing from its origins through 1945. In examining the ideas and rhetoric on which strategic bombing depended, it offers critical insights into the validity and robustness of those ideas — not only as they applied to World War II but as they apply to contemporary warfare.

Tami Davis Biddle is Associate Professor of National Security and Strategy at the United States Army War College. She teaches military and diplomatic history, national security policy, and grand strategy. Her research focuses on the evolution of military ideas, and their implementation as strategies for national defense and methods of warfighting.

"Well written, full of nuance and detail, and solidly researched. Biddle has done a thorough job of cutting through the thicket of contradictions and fantasies that surround the strategic bombing debate from 1914 to 1945."—Dominick A. Pisano, Military History

"There are books about military ideas and books about military practice. This work by a talented young historian integrates the two forms. In addition to a deft pen and an eye for wry anecdote, Biddle possesses an instinct for the ways in which ideas about new forms of warfare germinate, spread, and are adopted in the absence of good data. The importance of this book therefore not only stems from what it tells the reader about how the two great air powers of the first half of the twentieth century thought about this new instrument of war. It also offers cautionary lessons in an age of radical military change. Sleek and dazzling new technology is one thing; sensible doctrine for its use in war is another."—Foreign Affairs

"This is one of the most cogent, in-depth analyses of an important international historical controversy. Biddle's insight into the persistence of cognitive structures and processes serves as a model for future historical inquiry."—Choice

"Tami Davis Biddle . . . has set air power into its widest historical contexts yet and, while many of her arguments are not entirely new, has advanced the field considerably with a well-researched and carefully thought-out book."—Michael S. Neiberg, American Historical Review

"An extremely well-crafted history. . . . [It] can now be recommended as the best treatment of its subject matter in a single volume."—John Gooch, International History Review

"By synthesizing so many complex issues, Biddle offers a landmark piece of scholarship that should appeal to both experts and history enthusiasts through its balance, lucidity, and clarity."—Guillaume de Syon, Air Power History

"Anyone interested in understanding the United States Air Force's bombing operations in Iraq, Bosnia, Kosovo, and Afghanistan over the past decade should begin by reading this book. Today's aircraft and weapons differ dramatically from those used over the western front in World War I, but—as Tami Davis Biddle points out—ideas about strategic bombing from that era have remained remarkably resilient. . . . Biddle's work should be read by anyone interested in understanding the shaping of ideas behind the use of military force and how these ideas ultimately affect political decisions."—Thomas E. Griffith, Jr., American Diplomacy

"Rhetoric and Reality in Air Warfare is very well written and exhaustively researched, blending primary and secondary sources in a way that will satisfy both professional historians and those who read history for pleasure. In the wake of debates about the bombings of Vietnam and of Serbia, its subject remains topical. Participants in such debates will find this an important book, as will political scientists, strategic analysts, and policymakers."—George Quester, University of Maryland

"This will be the best overall treatment of Anglo-American bombing policy that we will see for a long time. Finely written, it will have a wide readership among scholars, students, and members of the interested public."—Robert Jervis, Columbia University

"This book is a broad overview of a very important subject. Biddle's goal is to make sense of the big picture, and this is precisely what she succeeds in doing. Her judgments are honest and fair. She has an eye for striking pieces of information, and this ultimately is what gives the book its distinctive flavor. In short, this is a very impressive and useful piece of work."—Marc Trachtenberg, University of California, Los Angeles