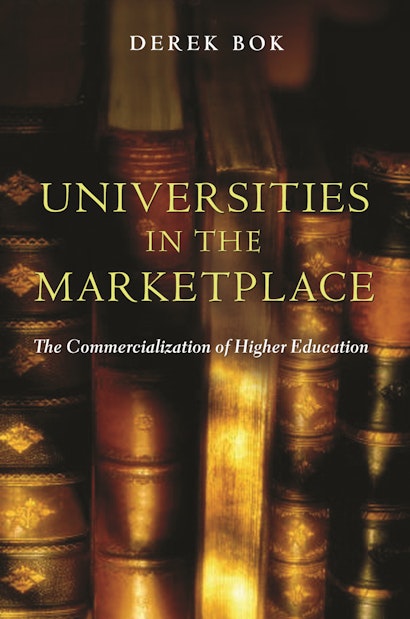 Is everything in a university for sale if the price is right? In this book, one of America’s leading educators cautions that the answer is all too often “yes.” Taking the first comprehensive look at the growing commercialization of our academic institutions, Derek Bok probes the efforts on campus to profit financially not only from athletics but increasingly, from education and research as well. He shows how such ventures are undermining core academic values and what universities can do to limit the damage.


Commercialization has many causes, but it could never have grown to its present state had it not been for the recent, rapid growth of money-making opportunities in a more technologically complex, knowledge-based economy. A brave new world has now emerged in which university presidents, enterprising professors, and even administrative staff can all find seductive opportunities to turn specialized knowledge into profit.


Bok argues that universities, faced with these temptations, are jeopardizing their fundamental mission in their eagerness to make money by agreeing to more and more compromises with basic academic values. He discusses the dangers posed by increased secrecy in corporate-funded research, for-profit Internet companies funded by venture capitalists, industry-subsidized educational programs for physicians, conflicts of interest in research on human subjects, and other questionable activities.


While entrepreneurial universities may occasionally succeed in the short term, reasons Bok, only those institutions that vigorously uphold academic values, even at the cost of a few lucrative ventures, will win public trust and retain the respect of faculty and students. Candid, evenhanded, and eminently readable, Universities in the Marketplace will be widely debated by all those concerned with the future of higher education in America and beyond.

Derek Bok is the 300th Anniversary University Professor and Faculty Chair of the Hauser Center for Nonprofit Organizations at Harvard University. He was formerly President of Harvard University and Dean of the Harvard Law School. His numerous books include The Shape of the River (Princeton, 1998, with William G. Bowen) and The Trouble with Government (Harvard, 2001).

"Provocative and original. . . . Bok is one of the premier elder statesman of American higher education."—Stephen B. Sample and Warren Bennis, Los Angeles Times

"Astute and fair-minded. . . . Derek Bok, a sensible man, has written a sensible book about the commercialization of the American university."—Jonathan Yardley, Washington Post Book World

"Contending that the trend toward excessive commercialization is not yet irreversible, Bok offers cogent, urgent arguments for reorienting universities toward fulfilling their unique purpose uncorrupted by the insidious influence of money."—USA Today

"Derek Bok begins his new book with [a] nightmare of university avarice and moral decay. Some of the moneymaking schemes are imaginary, but, as Mr. Bok warns, the dangers inherent in the insatiable demands for revenue are not. . . . It is increasingly difficult . . . to meet higher education's insatiable financial demands through conventional means. . . . Mr. Bok notes that commercialization has seeped even into the core educational mission. . . . Having a Derek Bok to remind us of our higher calling and the present dangers may, if his words are heeded, be more consequential than we can imagine."—Anthony W. Marx, New York Times

"Raises lots of big, disquieting questions. . . . Universities that blur the lines between their own culture and that of the corporate world endanger their values without substantially raising the value of their endowments. It is, in short, shortsighted. With the publication of this book, the nation's universities can't say they weren't warned."—David M. Shribman, Chicago Tribune

"Derek Bok, the former president of Harvard, argues that institutions have, perhaps unwittingly, made Faustian bargains. . . . Athletics provides a cautionary tale. . . . The dangers of corporate-sponsored research are even greater."—Glenn C. Altschuler, Barron's

"Bok realizes that there are times when allowing a business to provide funding for research or clothing for an athletic team is critical to a particular college's survival, but the trend of marketing various aspects of higher education is becoming more prevalent. This book is Bok's way of sounding the alarm for universities to analyze their practices critically."—Library Journal

"A humane and beautifully crafted book. Bok believes that the intrusion of the marketplace into the university is eroding fundamental academic values, and that we must act now to halt this decline. . . . [A] thoughtful and thought-provoking book."—Jeremy Gunawardena, Nature

"This is a good and needed book. . . . Bok strives for balance. He tries to puncture both the dangers to academe raised by its purists and the promises of easy money made by mortarboard Babbitts. He calls for new scrutiny of financial relationships between university researchers and companies. He [worries that] . . . corporate cash, fed slowly but in rising and addictive doses, will become the force behind what is discovered and what is ignored and even suppressed."—Ned Barnett, Raleigh News & Observer

"Bok shows that he knows his subject well and that he has done his homework. Moreover, he marshals the relevant facts with an even hand and unsparing candor. . . . One can only hope that his book will help the public understand what is at stake and will generate support for the needed reforms. Derek Bok has sounded a warning that ought to be heeded."—Arnold S. Relman, New England Journal of Medicine

"Bok is sensibly, judiciously and presidentially concerned. He puts the commercialization of the university into the same frame as big-time intercollegiate sport: both are unambiguous distractions from what universities are properly supposed to be about."—Steven Shapin, London Review of Books

"A thoughtful, clear-eyed inquiry into the impact of commercialization on the university's fundamental missions of education and research."—Daniel J. Kevles, American Scientist

"Bok is a retired President of Harvard, who was Dean of Harvard Law School before becoming President, and has been a distinguished professor in the Kennedy School of Government in his retirement. Harvard's endowment is worth something around $20 billion, so Professor Bok's views on money in higher education carry a certain weight. Bok provides a measured account of what goes wrong when too much of what a university does is seen to be up for sale—but not so measured that the point is lost or the lesson muffled. . . . Bok's patient attention to useful policies that each university can institute on its own—forbidding coaches to lean on professors for better grades, putting gin place policies about disclosure that commercial sponsors must sign up to—is the sort of thing that is needed."—Alan Ryan, Times Literary Supplement

"Derek Bok grasps better than anyone I know the changes that have taken place in the academic culture of American higher education. In Universities in the Marketplace, he documents the sheer growth of market forces and the escalation of commercialization in academia. Perhaps more important he alerts us that the reach of commercialization has moved from the innocent fringe of the campus (athletics and sweatshirts) to its academic heart. University presidents, trustees, and faculty leaders: take note! This is an important book."—Stanley O. Ikenberry, Regent Professor and President Emeritus, University of Illinois

"Derek Bok's wise and judicious book offers a road map for all concerned with the health and integrity of higher education in an age that has seen the boundaries between the academic, corporate, and public worlds become more permeable and the need to understand the costs associated with that transition more urgent. At the same time, President Bok's analysis of the potential dangers lurking in contemporary tendencies toward 'commercialization' is an affirmation that the enduring values of the academy can be extended and strengthened through thoughtful and careful engagement with the questions at issue."—Hanna Holborn Gray, President Emeritus, University of Chicago

"Combining the experience of a seasoned university president with the analysis of a respected legal scholar, Derek Bok explores what he concludes are 'signs of excessive commercialization in every part of the university.' His somber assessment of the current state of athletics, scientific research, and distance education, and his call for review and restraint, should engage the attention of every faculty senate in the country. He has given us a timely, candid, courageous, and important book."—Frank H. T. Rhodes, President Emeritus, Cornell University

"This book is a thoughtful and wide-ranging analysis of the commercial pressures on universities. There is no other study like it. Extremely well organized, clear, and gracefully written, Universities in the Marketplace will be of interest to all those concerned about higher education and its future."—William G. Bowen, President, The Andrew W. Mellon Foundation

"Universities in the Marketplace is quite a successful book that breaks valuable new ground. Derek Bok's calmly reasoned voice contrasts favorably with the hyperbole that surrounds many such discussions. The writing is so clear and the arguments so reasonable that it is easy to overlook the author's effortless command of the relevant literature and his well-judged historical treatment of his subjects. No other book is both so comprehensive and so accessible."—Michael McPherson, President, Macalaster College