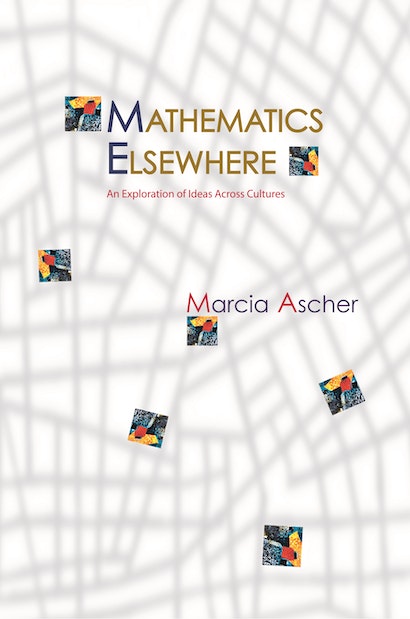 
Through engaging examples of how particular societies structure time, reach decisions about the future, make models and maps, systematize relationships, and create intriguing figures, Marcia Ascher demonstrates that traditional cultures have mathematical ideas that are far more substantial and sophisticated than is generally acknowledged. Malagasy divination rituals, for example, rely on complex algebraic algorithms. And some cultures use calendars far more abstract and elegant than our own. Ascher also shows that certain concepts assumed to be universal — that time is a single progression, for instance, or that equality is a static relationship — are not. The Basque notion of equivalence, for example, is a dynamic and temporal one not adequately captured by the familiar equal sign. Other ideas taken to be the exclusive province of professionally trained Western mathematicians are, in fact, shared by people in many societies.


The ideas discussed come from geographically varied cultures, including the Borana and Malagasy of Africa, the Tongans and Marshall Islanders of Oceania, the Tamil of South India, the Basques of Western Europe, and the Balinese and Kodi of Indonesia.


This book belongs on the shelves of mathematicians, math students, and math educators, and in the hands of anyone interested in traditional societies or how people think. Illustrating how mathematical ideas play a vital role in diverse human endeavors from navigation to social interaction to religion, it offers — through the vehicle of mathematics — unique cultural encounters to any reader.

Marcia Ascher is Professor Emerita of Mathematics at Ithaca College. She is the coauthor of Code of the Quipu: A Study in Media, Mathematics, and Culture and the author of Ethnomathematics: A Multicultural View of Mathematical Ideas.

"A useful reminder of how universal mathematical and logical structures are in any culture. Mathematicians will enjoy seeing the subject they love cropping up in apparently unexpected contexts. Non-mathematicians should be encouraged to realize that some of the processes that seem to appear naturally in everyday life do in fact have a mathematical content."—John O'Connor, Nature

"For a mathematician, Mathematics Elsewhere will expand the universe; for a non-mathematician, the expansion will just take a little more time. The book succeeds well in presenting and explaining very different ways of doing math both within particular cultural contexts and in terms of modern mathematics. . . . The author is clearly an excellent teacher and a wonderful explainer. Every time I felt a bit lost, the next sequence would present the same concept in different words or with another example. She is adept at moving from the general to the specific, from narrative to figurative."—Helaine Selin, Science

"This interesting book is a fundamental work in the area of ethnomathematics. . . . [T]he author opens numerous doors and directions in which one finds interesting, nontrivial mathematics. Persons interested in investigating the mathematics of non-Western cultures can use this book as a motivation to look beyond the obvious."—Thomas E. Gilsdorf, Mathematical Reviews

"Ascher illustrates that non-Western cultures have developed sophisticated mathematical ideas often without having any formal concept of mathematics. This stimulating book deserves a wide audience, especially among those involved in teaching the subject."—Andrew Bowler, New Scientist

"In a follow-up to Ascher's highly recommended Ethnomathematics, this scholarly work describes the anthropology of mathematical ideas in traditional societies and shows how the same ideas might be expressed by standard mathematical expressions. . . . It is particularly interesting to see how people with no separate mathematical language made practical use of sophisticated mathematical ideas."—Library Journal

"All throughout the book, I was struck by how many uses human cultures have found for modular arithmetic. . . . [I]t appears that mathematics may be an essential survival skill for the human species rather than an extraneous one. The descriptions in this book describe so many different applications, that it becomes hard to deny that something more fundamental is responsible for the many ways we find to person mathematical operations."—Charles Ashbacher, MAA Online

"Ascher's book is at once a scholarly progress report and an introduction for the curious general reader to a relatively new area of study known as ethnomathematics. . . . Ascher offers a new way of understanding the customs and traditions of non-Western people, adding the lens of mathematics to those of literature, anthropology, and sociology. . . . [She] proves adept at illuminating the connections between local and global mathematics. . . . Part of what makes the volume accessible to the general reader . . . is Ascher's evident love for her subject. The mathematics she includes clearly serves a larger purpose: to enhance and illuminate the anecdotes that are the foundation of genuine cultural understanding."—James V. Rauff, Natural History

"Ascher's Ethnomathematics was excellent—a real landmark—and this book is at least as good. It makes us realize that our way of looking at mathematics can be completely different from those in other cultures. A wonderful book."—Peter Cameron, University of London

"This is a significant contribution to the recognized but still-emerging field of ethnomathematics. Its publication expands the available examples of mathematical ideas in traditional societies. In addition to being of interest to readers who look to the connection between culture and the development of ideas, this book should be of interest to educators at all levels who want to introduce students to diverse mathematical ideas."—Rick Scott, New Mexico State University

"Learning how others interpret time and space is extremely vital for citizenship in a globalized society. This book helps us understand how our neighbors and colleagues in an increasingly diverse world solve problems. This is a valuable and greatly needed book."—Daniel Clark Orey, Ph.D., California State University, Sacramento