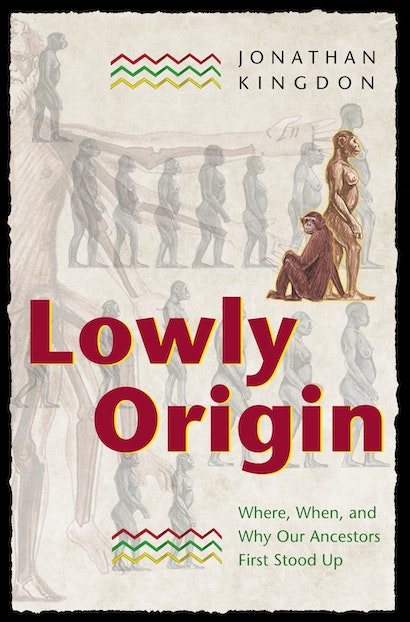 Our ability to walk on two legs is not only a characteristic human trait but one of the things that made us human in the first place. Once our ancestors could walk on two legs, they began to do many of the things that apes cannot do: cross wide open spaces, manipulate complex tools, communicate with new signal systems, and light fires. Titled after the last two words of Darwin’s Descent of Man and written by a leading scholar of human evolution, Lowly Origin is the first book to explain the sources and consequences of bipedalism to a broad audience. Along the way, it accounts for recent fossil discoveries that show us a still incomplete but much bushier family tree than most of us learned about in school.


Jonathan Kingdon uses the very latest findings from ecology, biogeography, and paleontology to build a new and up-to-date account of how four-legged apes became two-legged hominins. He describes what it took to get up onto two legs as well as the protracted consequences of that step — some of which led straight to modern humans and others to very different bipeds. This allows him to make sense of recently unearthed evidence suggesting that no fewer than twenty species of humans and hominins have lived and become extinct. Following the evolution of two-legged creatures from our earliest lowly forebears to the present, Kingdon concludes with future options for the last surviving biped.


A major new narrative of human evolution, Lowly Origin is the best available account of what it meant — and what it means — to walk on two feet.

Jonathan Kingdon is a Senior Research Associate at the Institute of Biological Anthropology and Department of Zoology of Oxford University. He is the author of and artist for numerous books, including Self-Made Man and Island Africa (Princeton). The Millennium issue of American Scientist named Kingdon's Atlas of Evolution in Africa one of the "100 books that shaped a century of science."

"[A] remarkable new book. . . . [I]n Kingdon we find a primate who is unafraid to give the establishment a good hard shake, and whose keen powers of observation and reasoning make him impossible to summarily dismiss. . . . Indeed so packed with novel ideas is Lowly Origin that it presents us with a picture of human evolution quite unlike anything that has come before it."—Tim Flannery, New York Review of Books

"Lowly Origin is brimming with information, insight, experience and speculation about how we became human. . . . [A] comprehensive and evocative rendition of who we are and how we fit in to the natural world."—Donald Johanson, Los Angeles Times Book Review

"Elegant and thoughtful. . . . Jonathan Kingdon commands a unique position at the interface of science and art . . . Whether or not [he] manages to convince you of his larger thesis, you will be provoked along the way by the many connections he makes. And just as important, Lowly Origin is a landmark for its thoroughness in integrating the story of human evolution (which he brings up to the present day) with that of the evolving landscapes and habitats of the African continent."—Ian Tattersall, Natural History

"Naturalist-artist Kingdon is well known for his books on African mammals and his beautiful illustrations of them. . . . [This] book is well written and charmingly illustrated."—Choice

"Every so often . . . a new concept comes into being. In Lowly Origin, Jonathan Kingdon puts forward just such a new concept. . . . Lowly Origin is full of insights and displays the profound knowledge of African geography and ecology that is the hallmark of all Kingdon's work."—Peter Andrews, Times Literary Supplement

"Jonathan Kingdon is a subtle amalgam of artist and scientist. He has a deep and up-to-date knowledge of human prehistory, and of the topology and geography of Africa, the continent where most of human prehistory happened. But he is also our leading zoological artist, and I think it must be his artist's eye that gives his writing style its vividness. . . . Kingdon is a wonderful example of a "Third Culture" writer: a scientist who communicated his original ideas to fellow scholars in books that can be read—and enjoyed—by any educated person."—Richard Dawkins, Times Literary Supplement

"Lowly Origin is an evocative book that highlights one of the key factors that makes us human—our bipedality. . . . Kingdon's writing is lucid and his illustrations are beautiful in showcasing just how this important component of human evolution took place. . . . A must read. A must have."—Ann Haley MacKenzie, American Biology Teacher

"Jonathan Kingdon is . . . singularly well equipped to cast an eye over the thorny problem of human origins. . . . Kingdon has read widely and wisely. . . . [He] does not claim to have found the answer to human origins. The real message of the book is the rich contextual evidence it provides. Wise students of human evolutionary history would be well advised to think carefully about that message."—Bernard Wood, Bioscience

"There are people who will authoritatively disagree . . . however, any subsequent account will have to parry Kingdon's version with equally explicit consideration of . . . equally vivid pictures of ways of life."—Alison Jolly, London Review of Books

"Jonathan Kingdon's work is one of the things that make the present day such an exciting time for anyone with the slightest intellectual curiosity. His subject matter is our profound and thrilling human origins, and his stance toward it makes his work unique and priceless. Not only is Kingdon a scientist of commanding authority, he is an artist whose hand transmits his knowledge through drawings so swift and graceful that revelation and admiration arrive together. His wonderful new book takes a characteristically original look at one of the things that makes us human: our walking on two legs. There is no one alive who could do it better."—Philip Pullman, author of The Amber Spyglass

"Jonathan Kingdon is a Living World Treasure. One of Africa's greatest zoological artists, he is also one of zoology's leading authorities on Africa's mammals. A world class zoologist, ecologist, and writer, he also thinks deeply about human prehistory and evolution. Bipedality is humanity's founding peculiarity. Lowly Origin is Kingdon's highly original take on how it came about, and he manages to broaden his canvas to accommodate all of human evolution. An artist with words and a poet with images, only Jonathan Kingdon could have written this book."—Richard Dawkins, University of Oxford, Fellow of the Royal Society

"This well-written book offers new insights into the biogeographic and ecological influences on human evolution and helps us make sense of the fossil record."—Colin P. Groves, Australian National University

"Kingdon has made a unique contribution to the field of mammalian evolution and African ecology, both in his writing and in his art. His approach to human evolution, with its focus on the natural history of people and animals, is very special and important."—Robert A. Foley, University of Cambridge