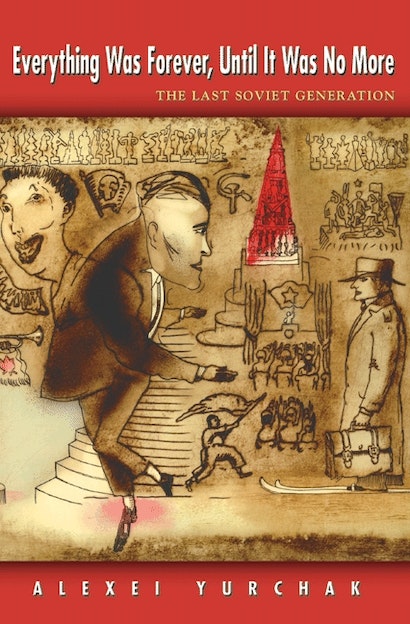 Soviet socialism was based on paradoxes that were revealed by the peculiar experience of its collapse. To the people who lived in that system the collapse seemed both completely unexpected and completely unsurprising. At the moment of collapse it suddenly became obvious that Soviet life had always seemed simultaneously eternal and stagnating, vigorous and ailing, bleak and full of promise. Although these characteristics may appear mutually exclusive, in fact they were mutually constitutive. This book explores the paradoxes of Soviet life during the period of “late socialism” (1960s-1980s) through the eyes of the last Soviet generation.


Focusing on the major transformation of the 1950s at the level of discourse, ideology, language, and ritual, Alexei Yurchak traces the emergence of multiple unanticipated meanings, communities, relations, ideals, and pursuits that this transformation subsequently enabled. His historical, anthropological, and linguistic analysis draws on rich ethnographic material from Late Socialism and the post-Soviet period.


The model of Soviet socialism that emerges provides an alternative to binary accounts that describe that system as a dichotomy of official culture and unofficial culture, the state and the people, public self and private self, truth and lie — and ignore the crucial fact that, for many Soviet citizens, the fundamental values, ideals, and realities of socialism were genuinely important, although they routinely transgressed and reinterpreted the norms and rules of the socialist state.

Alexei Yurchak is Assistant Professor of Anthropology at the University of California, Berkeley.

"If there is a prize for best title of the year, this book surely deserves it. Alexei Yurchak . . . has written an interesting and provocative book about the way young Soviet Russians talked in the Brezhnev period and what they meant by what they said."—Sheila Fitzpatrick, London Review of Books

"Everything Was Forever, Until It Was No More is an important book. . . . Everything Was Forever provides fresh paradigms that pack a hefty explanatory punch both with regard to its immediate subject matter and beyond. Its publication means that discussions of Soviet life, culture, and literature that rely on the old, rigid binarisms are going to seem instantly dated. . . . [T]his study is a must-read."—Harriet Murav, Current Anthropology

"Amidst these prolix transformations in Russian language and civilization, Yurchak's contribution has come in the form of a deep listening."—Bruce Grant, Slavic Review

"The strength of Yurchak's study is in its methodological-analytical grasp of the seemingly contradictory nature of everyday existence. . . . Yurchak provides an elegant methodological tool to explore the complex, intersecting and often paradoxical nature of social change."—Luahona Ganguly, International Journal of Communication

"Alexei Yurchak's Everything Was Forever, Until It Was No More immediately seduced me by its very title with a profound philosophical implication that eternity is a historical category—things can be eternal for some time. The same spirit of paradox runs through the entire book—it renders in wonderful details the gradual disintegration of the Soviet system from within its ideological and cultural space, making visible all the hypocrisy and misery of this process. I consider Yurchak's book by far the best work about the late epoch of the Soviet Union—it is not just history, but a pleasure to read, a true work of art."—Slavoj Zizek, author of In Defense of Lost Causes

"In this remarkable book, Alexei Yurchak asks: How can we account for the paradox that Soviet people both experienced their system as immutable and yet were unsurprised by its end? In answering this question, he develops a brilliant, entirely novel theory of the nature of Soviet socialism and the reasons for its collapse. The book is must reading for anyone interested in this most momentous change of contemporary history, as well as in the place of language in social transformation. A tour de force!"—Katherine M. Verdery, author of What Was Socialism, and What Comes Next?

"Alexei Yurchak brilliantly debunks several widely held misconceptions about the lived experience of late socialism in Soviet Russia, and does so through a compelling dossier of materials, all creatively conceived, organized, and analyzed. The writing is fluid, accessible, interesting, and beautifully structured and styled."—Nancy Ries, Colgate University, author of Russian Talk: Culture and Conversation during Perestroika

"This ambitious book admirably combines a new theoretical approach with detailed ethnographic materials. Written in a clear and engaging style, it is both thorough and precise, and provides a new and convincing insight that will definitely be central to all serious discussions of Soviet-type systems for years to come—namely, that the shift in Soviet life from a semantic to a pragmatic model of ideological discourse served to undermine the ideological system."—Caroline Humphrey, University of Cambridge, author of The Unmaking of Soviet Life

"This book makes an important contribution not only to anthropological studies of the former Soviet Union but to the broader discussion about Soviet power, ethics, and public space. Yurchak provides a subtle alternative to traditions of debate in Sovietology that counterposed an analysis of totalitarian accounts of Soviet power to the 'revisionists' of the 1970s who saw a much more dynamic space of social maneuverings. What is more, he persuasively shows a level of commitment to Soviet ideals that has rarely been appreciated in scholarship. Indeed, he makes the important point that many Russians actually have memories of being much more critical of the Soviet Union than they actually were when it existed."—Stephen Collier, New School University