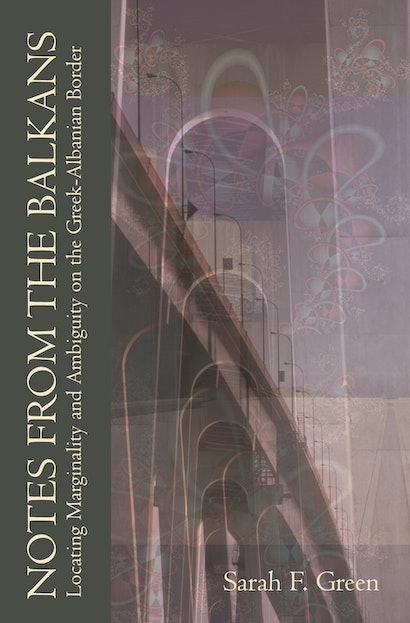 Maps and borders notwithstanding, some places are best described as “gaps” — places with repeatedly contested boundaries that are wedged in between other places that have clear boundaries. This book explores an iconic example of this in the contemporary Western imagination: the Balkans. Drawing on richly detailed ethnographic research around the Greek-Albanian border, Sarah Green focuses her groundbreaking analysis on the ambiguities of never quite resolving where or what places are. One consequence for some Greek peoples in this border area is a seeming lack of distinction — but in a distinctly “Balkan” way. In gaps (which are never empty), marginality is, in contrast with conventional understandings, not a matter of difference and separation — it is a lack thereof.

Notes from the Balkans represents the first ethnographic approach to exploring “the Balkans” as an ideological concept. Green argues that, rather than representing a tension between “West” and “East,” the Balkans makes such oppositions ambiguous. This kind of marginality means that such places and peoples can hardly engage with “multiculturalism.” Moreover, the region’s ambiguity threatens clear, modernist distinctions. The violence so closely associated with the region can therefore be seen as part of continual attempts to resolve the ambiguities by imposing fixed separations. And every time this fails, the region is once again defined as a place that will continually proliferate such dangerous ambiguity, and could spread it somewhere else.

Sarah F. Green is Senior Lecturer in the Department of Social Anthropology at the University of Manchester, and has spent over ten years researching the Greek-Albanian border area in Epirus, northwestern Greece. She is the author of Urban Amazons (Macmillan).

"Notes from the Balkans is a penetrating and richly textured account of marginality in the Epirus area of north-western Greece. . . . Sarah Green's text. . . . provides a subtle and persuasive tool for thinking about the contextual specificity of social identities . . . that will be pertinent far beyond the Balkans."—Madeleine Reeves, Cambridge Anthropology

"Sarah Green's wide-ranging discussion of 'Balkan' history, emphasizing circuits of movement, is engaging and enlightening. The book's theoretical discussions are dense . . . but not turgid; Green has a light, direct, and unpretentious style of writing. Notes from the Balkans gives readers a visceral sense of the 'ordinary' and, I think, a better idea about marginality. It is a delightful book to read."—Laurie Kain Hart, American Ethnologist

"The book's principal contributions are twofold: First, it adds magnificent new ethnographic information about an area that has not been systematically studied by a foreign anthropologist since the pioneering work of John Campbell. Second, it applies a brilliant theoretical discussion of marginality, identity, and ambiguity to a setting in which concepts and categories, or affiliations and labels, have been under constant change. This is a well-researched, masterfully written, and theoretically sophisticated study that is unique in both conception and analysis. . . . This is a quality study that should reach out to a wider audience of area specialists, not only to anthropologists."—Anastasia Karakasidou, American Anthropologist

"Notes from the Balkans is a classic. I cannot name a single work that succeeds so consistently in underscoring the contextually specific and negotiable character of social identity without falling into the cynical trap of treating the dynamics of social identification and disavowal as nothing more than 'strategic.' Nor can I name more than one or two ethnographic forays into the jargon-laden terrains of the anthropology of alternative modernities that are even remotely as engaging and as readable. Wry and straightforward, Green's writing also has genuine life; it is very often a vivid text and its vividness is even further served by the well-chosen selection of visual materials that complement it."—James Faubion, Rice University, author of Rethinking the Subject

"This is an innovative, event-rich, and energising book. The author quite brilliantly turns an archaeological project, how to model different 'times' layered in the landscape into an anthropological one, where the issue is the overlapping and intersecting sectarianism in everything that is understood as 'Balkan.' The result is a resounding critique of the popular notion of fragmentation. And a significant anticipation: after lying dormant for a decade or more, complexity theory is about to re-enter anthropology with very much a twenty-first century cast, and here she has laid out a fascinating field. Above all, among the dimensions in this work that keep their scale is a sense of close involvement and directness that also makes it a very human account. This is anthropological life indeed!"—Marilyn Strathern, University of Cambridge, author of Property, Substance and Effect: Anthropological Essays on Persons and Things

"This is a refreshingly original, well-written, richly insightful, and intellectually agile look at a little-understood segment of the Balkan region. It provocatively undercuts conventional understandings of that region itself, showing how its peculiar and often evanescent features reflect a complex political reality that is reproduced in shimmering fragments on the ground. With a deft interplay between artfully casual-seeming ethnographic vignettes and what are clearly the results of sometimes backbreaking traversals of a rough and complex territory, she shows how the ordinary and the marginal constitute the best hope for understanding the political processes that generate precisely those conditions."—Michael Herzfeld, Harvard University, author of The Body Impolitic